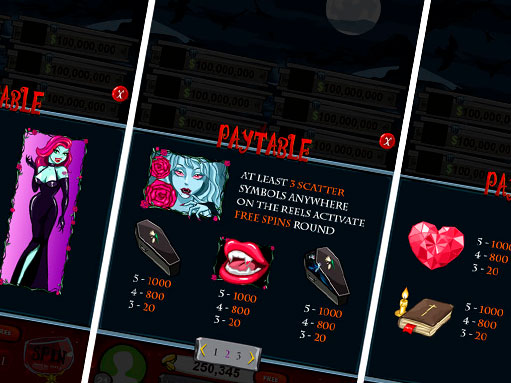 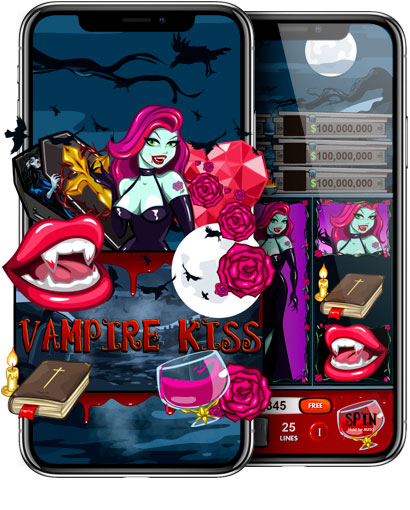 When the darkness of the night falls on the Earth, their time comes. Vampires are lords of the night, elusive and immortal. They instill fear and make you freeze in awe. People are safe in daylight. But what will happen to a casual passer-by who wanders at night through the back streets? Perhaps he will meet a seductive vampire girl who can easily get carried away and forget about his own safety? And perhaps after the kiss of the vampire, the squads of the immortal lords of the night will be replenished? The “Vampire Kiss” slot opens a portal to another world right in your phone.. If you are interested in this product, you can purchase it at our store – https://slotopaint.com/product/vampire-kiss/.

The game reels are made in contrasting black and red colors. The symbols look especially bright on the black background of the drum. The billboards above the reels are depicted as graves. The bottom field is separated from the main background of the reels by streaks of red thick liquid. Undoubtedly, it symbolizes blood – the source of life for vampires. In the lower left corner there is a place for the player’s avatar and name. The progress bar shows the progress of the game. In the lower right corner there is a “Spin” button. It is made in the form of a glass with red liquid. 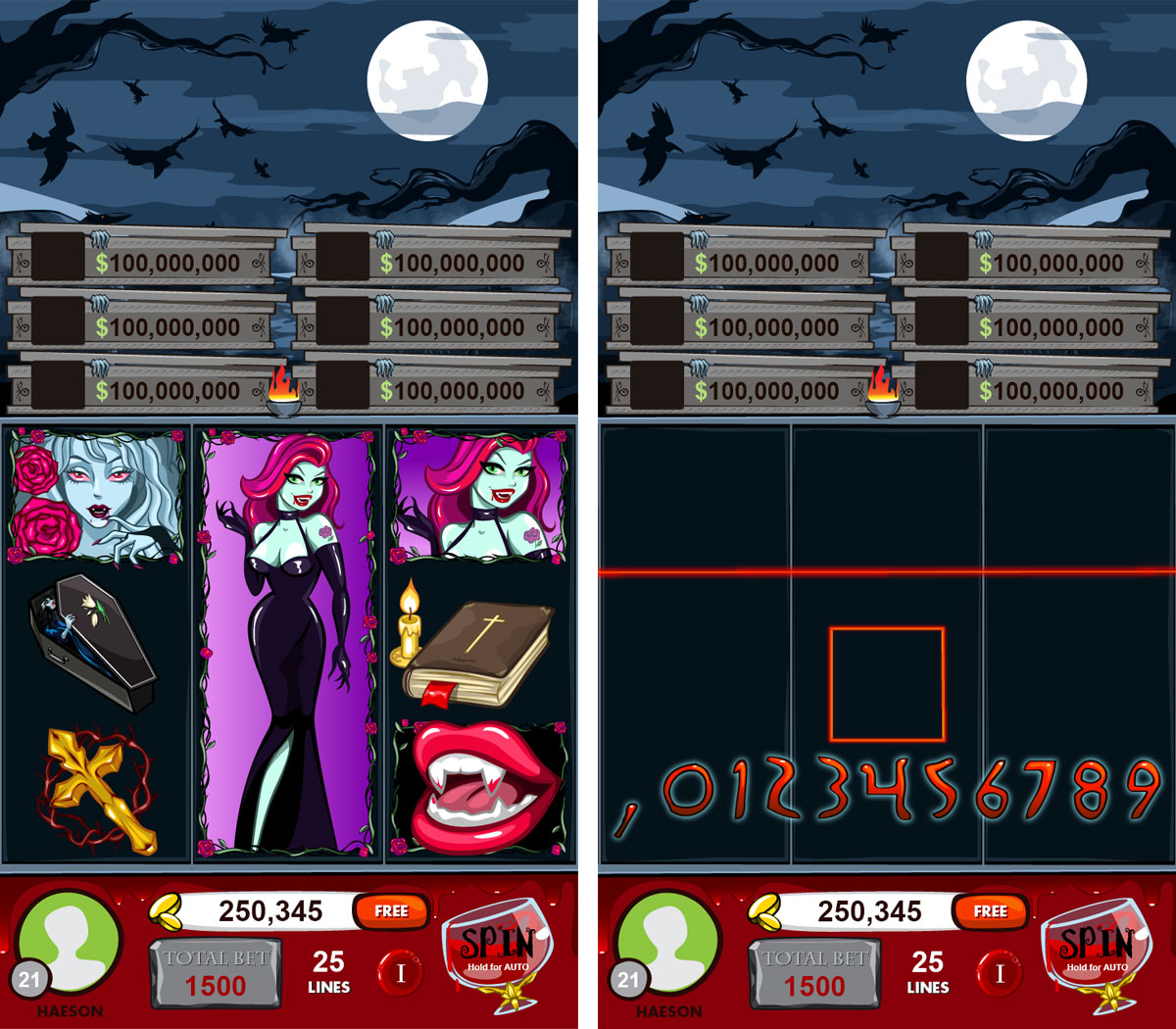 If we’re talking about kissing a vampire, there must be a girl to kiss from. The main character of the slot is a vampire girl in a seductive black dress. Her red hair sets off her pale, bluish skin. The neckline reveals a luxurious chest, from which it is impossible to look away. The flower tattoo draws attention to her shoulder. Immediately there is a burning desire to touch this thin graceful hand, run your fingers over the pale skin, move from shoulder to neck…  The enchanted lover is ready to feel the searing cold under his fingertips, but still not to withdraw his hand. And come what may.

The vampire girl appears on the symbols twice. In the first version, players see her portrait, this is a symbol in a row with others, for one cell. In the second version, a full-length image of a girl fills the entire vertical row of the reel. Other symbols are of the same level – a mouth with parted bright red lips and a beautiful vampire with white hair. This girl does not hide her essence. She focuses on her lips, which are already bleeding. The open mouth does not hide the fangs. Even hands with long nails look predatory. But at the same time, she hypnotizes with a glance and makes you obey her will.
All high symbols are framed in a rectangular frame. It is decorated with thin stems and rose flowers.

Other symbols give a chance to defeat vampires. A bookmarked Bible could help a traveler when meeting dangerous beauties. A candle is burning nearby so that even in the darkness of the night the text of the Holy Scripture can be seen. This candle is a symbol of hope. But will you have the courage to fight the vampires? Only players know the answer to this question. Another symbol for opposition is, of course, the cross. With its help, you can be saved, it is a sign of faith. And there is no doubt that you will have to save yourself. Two more symbols represent coffins. In one version, the coffin is closed and looks just gloomy. But in the second version, everything is different: the lid moved to the side and, as we can see, the coffin is opened from the inside. One more moment – and the vampire who has risen from the dead will start hunting.
Gems on the symbols are reminiscent of the wealth and power of vampires. Still would! They have lived on earth for centuries. Of course, the treasuries in vampire castles are full of such gems! And for the players, this is just another reminder of how close wealth can be – just reach out and plunge into the game. 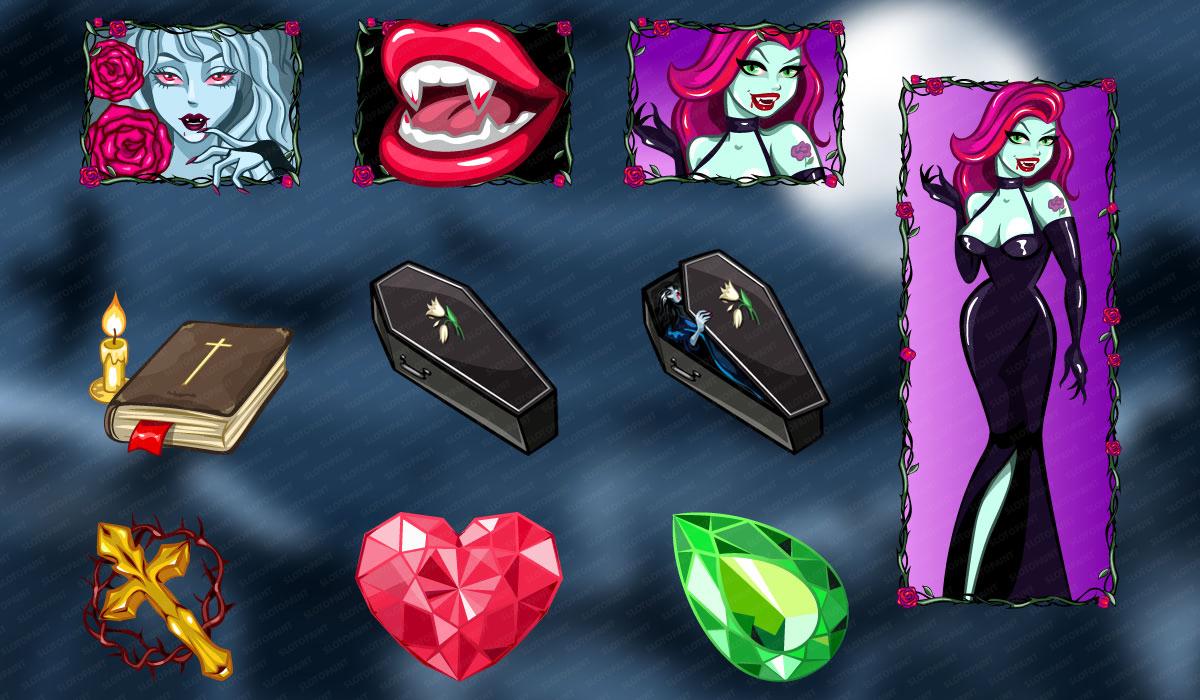 Unlike symbols, there are no bright colors on the game background. Only black, white and gray. This contrast helps to emphasize the gloom of those places where evil spirits live. The game background depicts a graveyard. The full moon illuminates graves and bare tree branches. The only living creatures here are crows, messengers of frightening events. 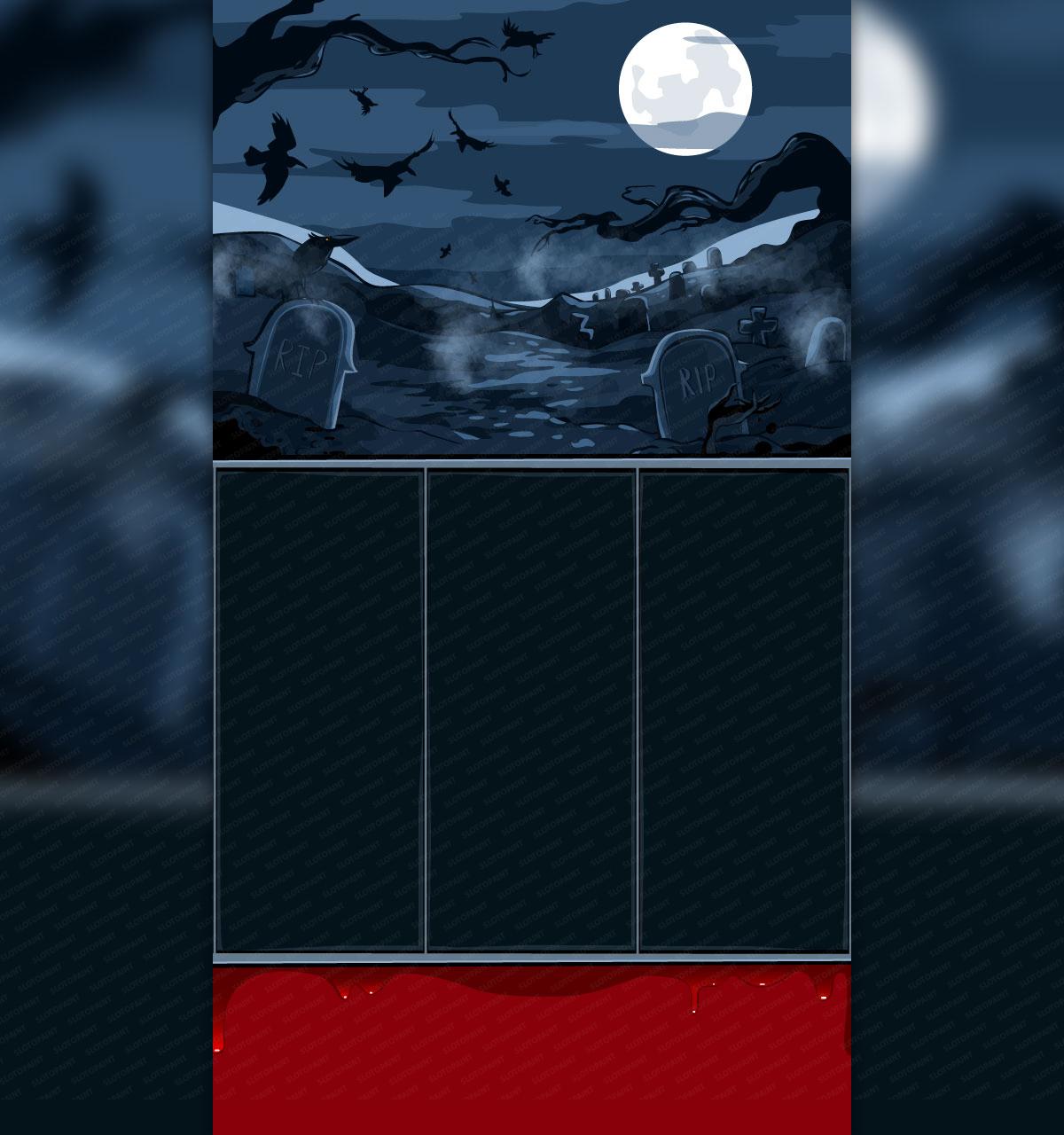 On the Big Win greeting screen, the background remains active, and the symbols from the reel disappear. Instead, a congratulatory inscription appears. The bright blue letters are decorated with red streaks. 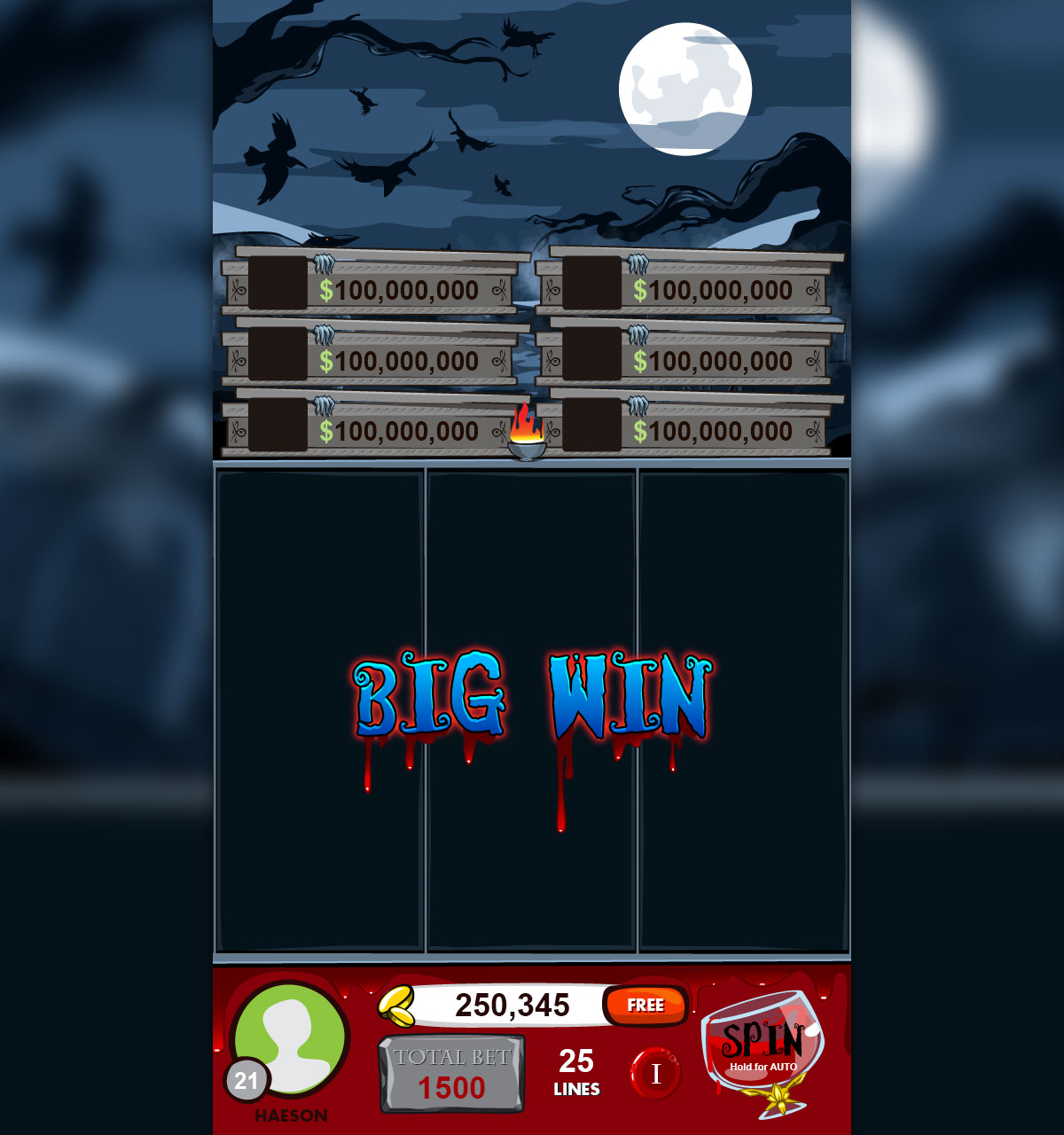 Another version of the screen provides for a plate in the form of an old scroll. Drops of blood drip down the scroll.

On the greeting screen, in the case of Jackpot, both the game background and the reel are darkened. The counter and the inscription Jackpot appears. 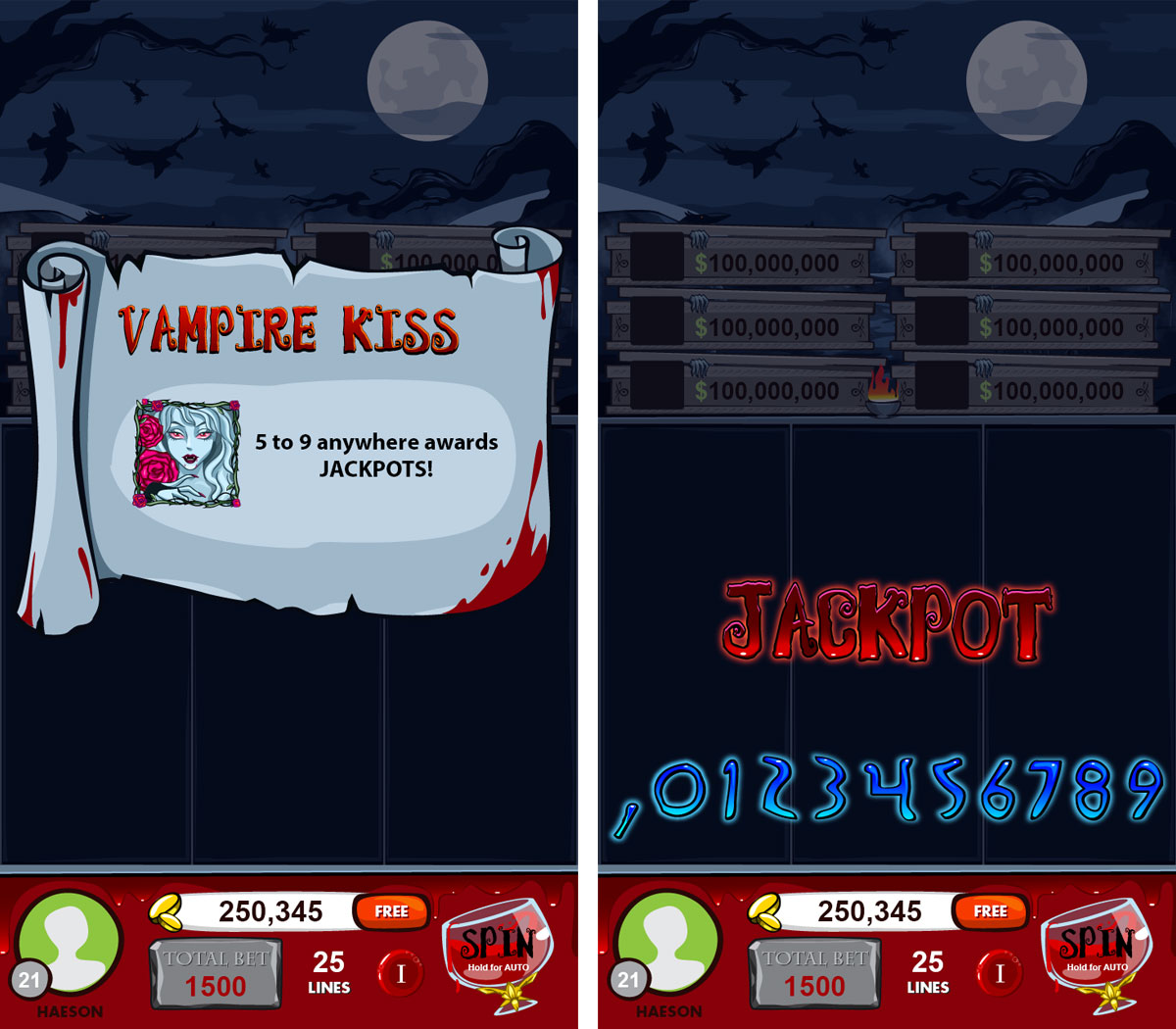 Paytables are designed on a black background. “Paytable” title is in bright red lettering. Uneven monograms are used for the text. It maintains the atmosphere of the slot. 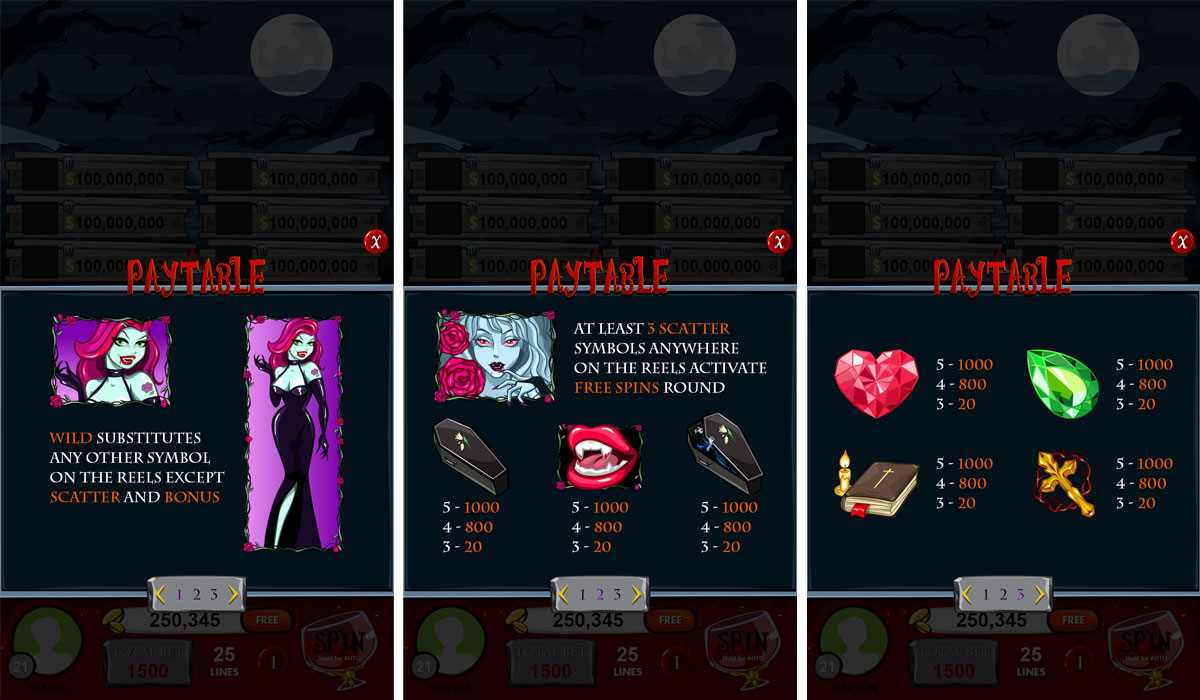 The background and the reel are darkened on the greeting screens in case of bonus games. The text with information about the win is placed on the background of the scroll with blood drips. The OK button is made in the form of a glass filled with red liquid. 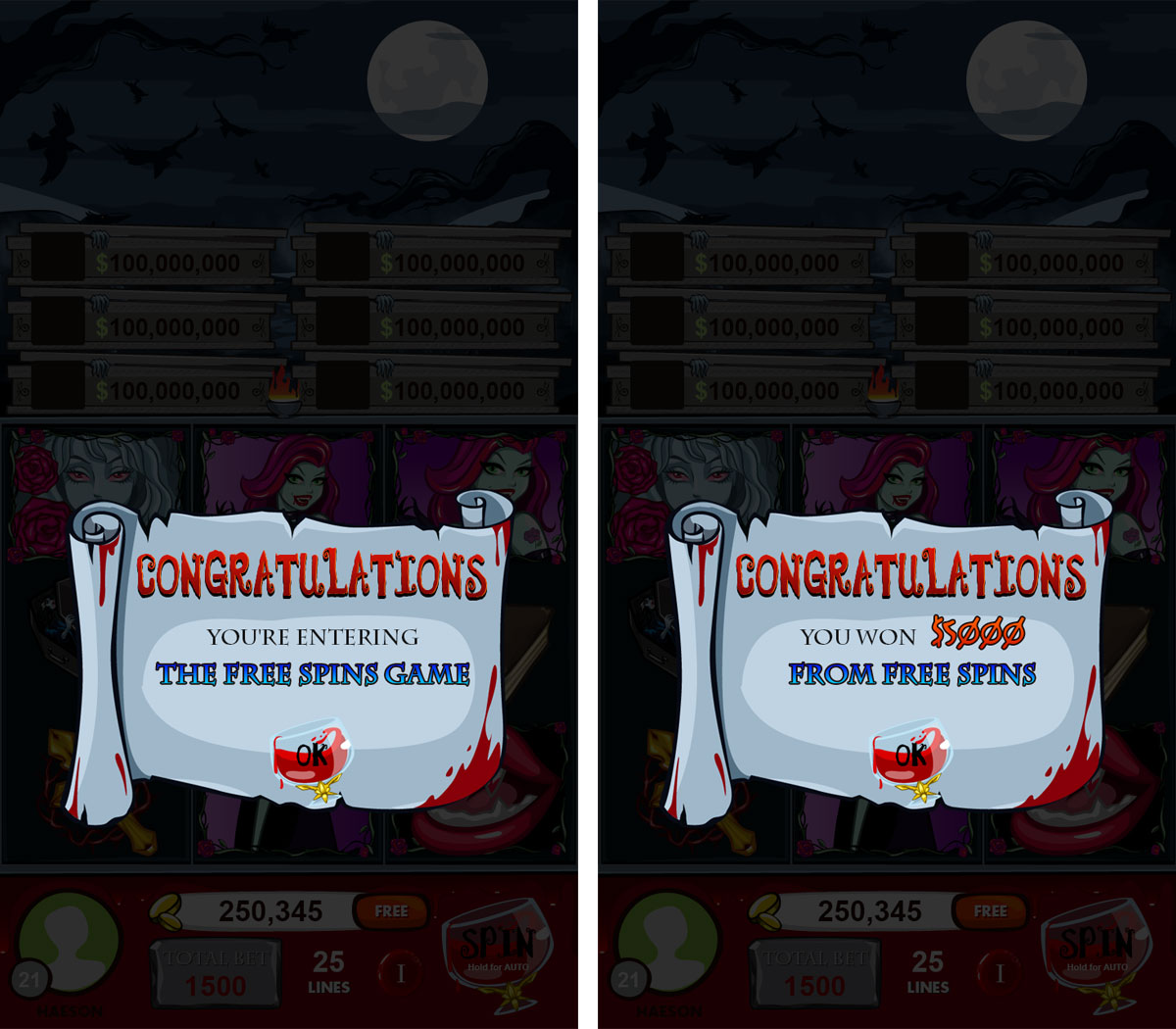 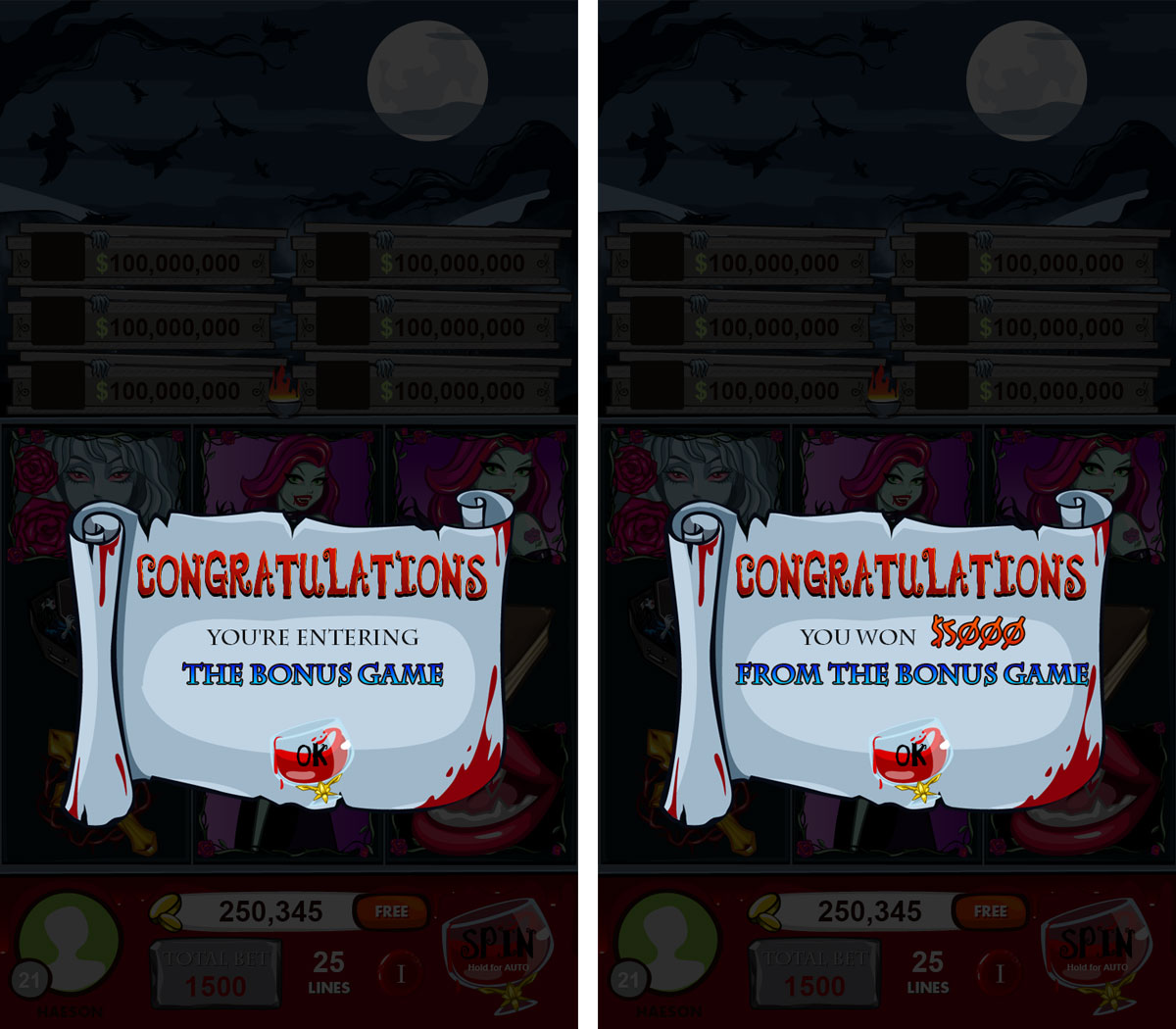 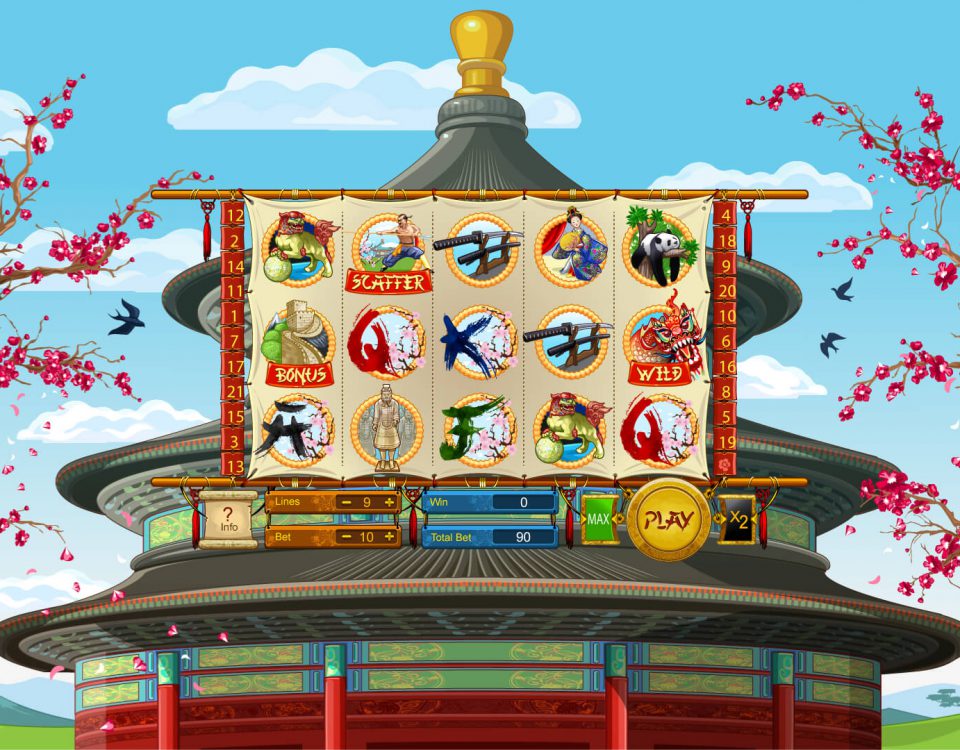 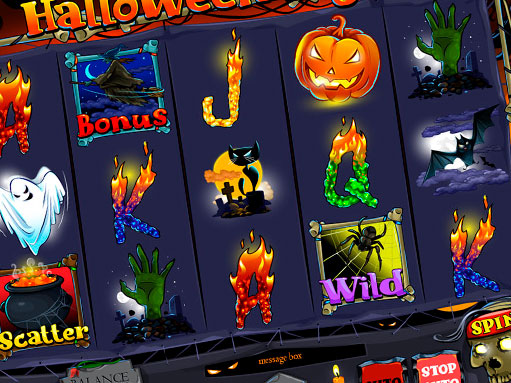 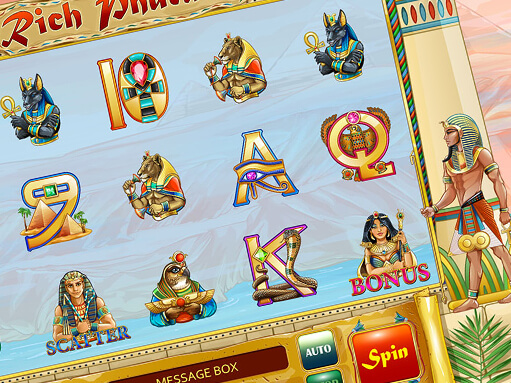