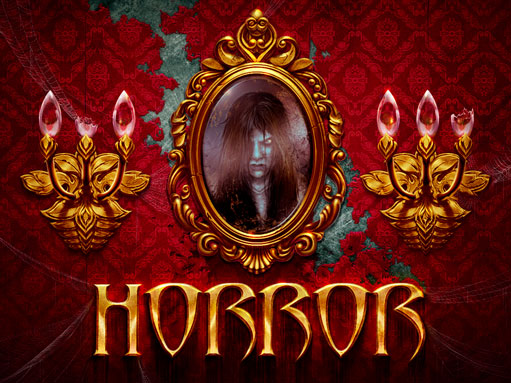 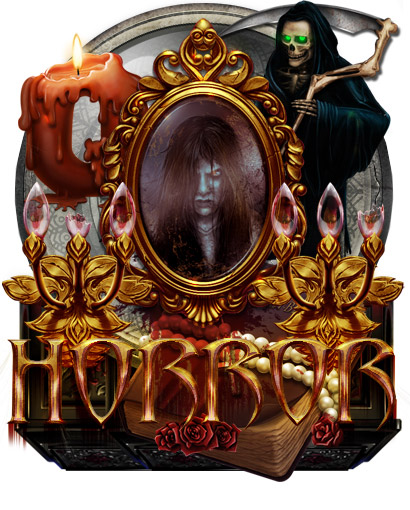 A horror movie always creates tension in the audience. Even if you’ve seen it before, there will still come a moment when you want to freeze or recoil from the screen in horror. And that’s the beauty of horrors! We experience thrills that are lacking in our daily life. At the same time, we ourselves remain safe. There are scary films that have already become classics. Their plot is addictive and does not allow to come off until the very end. The most spectacular fragments are already waiting for players in the “Horror” slot. If you are interested in this product, you can purchase it at our store – https://slotopaint.com/product/horror/.

The mirror in many cultures acts as an object for communication with the other world. On the first screen, it is the mirror that is the central element. It hangs on the wall in an abandoned room. The vintage-patterned red fights are torn, revealing a cold gray wall through them. The lamps are broken, and the cobwebs are gradually braiding the space. In addition, it can be seen that the mirror itself is very old. Cracks appeared in the curly frame, and the silver coating was partially erased from the glass. How many events have been reflected in this mirror over the entire period of its existence! But the most important thing is, of course, the reflection in the mirror. A girl who clearly comes from the other world is looking at the players with white eyes. 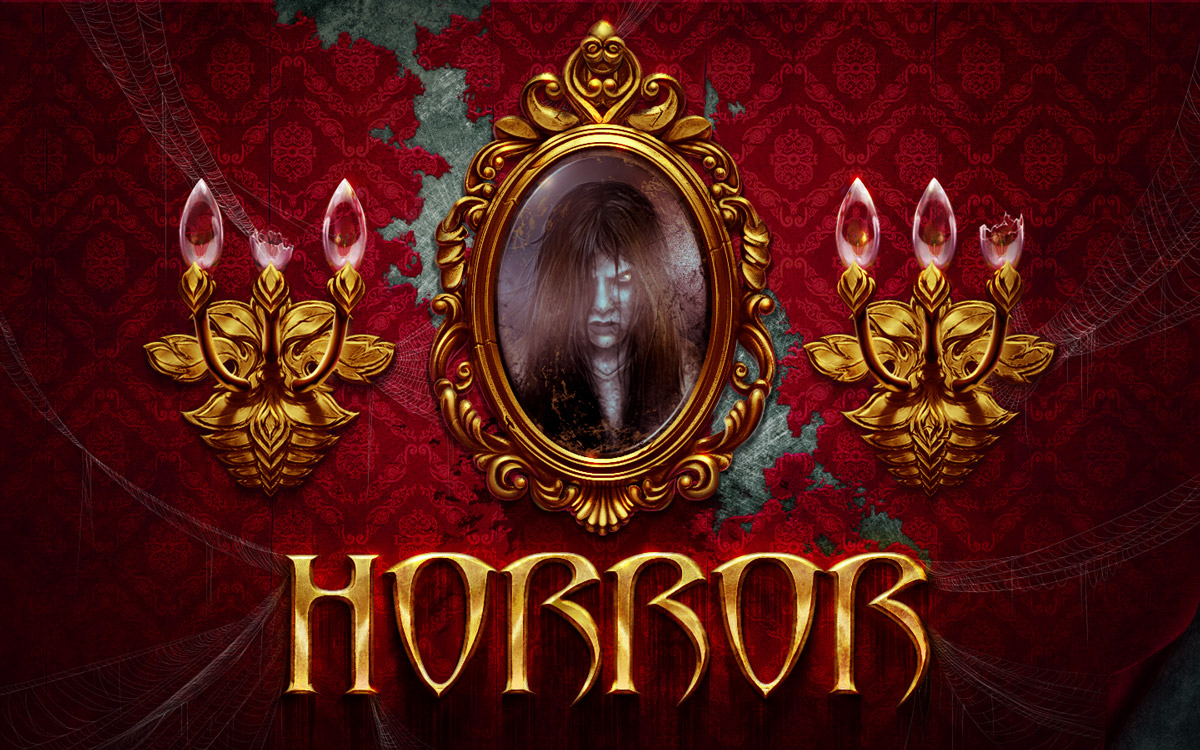 The reels are depicted as a fragment of the interior in an old mansion. It is in such old houses that truly terrible events take place. The design of the reels is not intimidating: these are classic wood panels. But some elements in the decor look creepy. Many spiders of different sizes are actively weaving webs. This reminds us that in an old house it is easy to fall into a cunning trap, from which it is not so easy to get out. 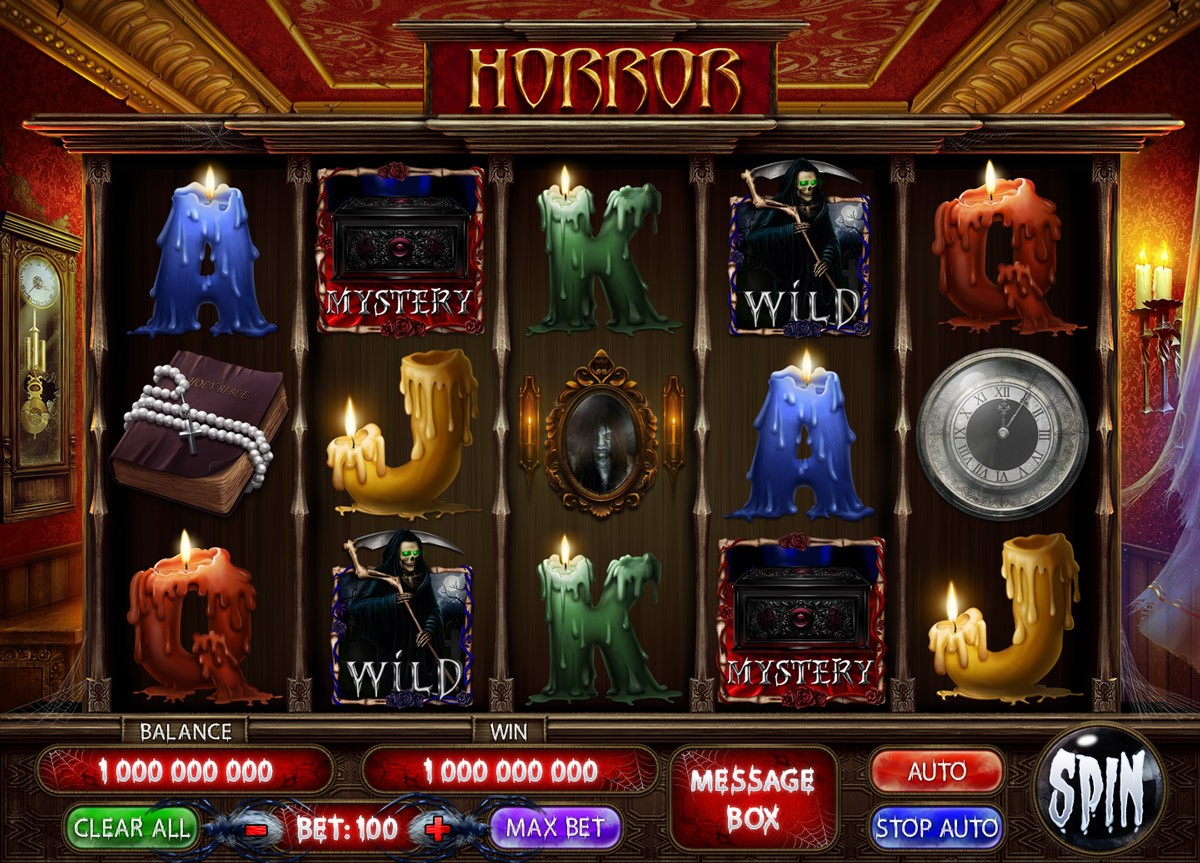 The image on the Mystery symbol looks quite harmless. A dark wood box decorated with intricate carvings and inlaid with stones. But if you remember that we are in an abandoned mansion, it makes sense to beware of even the casket. Who knows what secrets it hides.

On the other hand, Wild symbol causes goosebumps at first glance. This is Death itself. The classic image of this character is a black cloak with a hood, a skeleton instead of a body and a sharp scythe in bony hands.

The animation of these symbols adds a thrill to the game. When the box opens, you expect to see anything in it. But instead of terrible things, a ballerina figure appears. But Death does not bring any surprises. Lightning flashes behind her, her eyes sparkle, and a white glare runs along the sharpened scythe.

Regular symbols are items that often appear in horror movies. An ancient Bible with white rosary can bring salvation to heroes when they meet evil spirits. An ancient clock can stop at the moment of a crime, or, conversely, unexpectedly resume its course and thereby frighten visitors to a mysterious house. Or maybe they have the ability to move to the past? And the third symbol is the already familiar mirror with a discolored reflection of a girl. And her look does not promise anything good.

Animated symbols enhance the effect of images. The Bible flashes the title on the cover. The hands on the clock really start to move back to the past. And the girl’s reflection is rapidly approaching, she aggressively raises her hands and seems to be about to go beyond the mirror.

Low symbols – traditional letters of cards. Each letter is a candle that has melted and acquired a non-standard shape.

On the animated screen, the letters increase, and the candle light flutters easily, as if from a draft.

The Gamble game  (Risk game) screen looks both intimidating and solemn. The combination of red and gray creates a strong impression on the players. The stone wall with the remnants of red wallpaper looks completely abandoned. The ornate patterns on the slab tell of the past greatness of the owners of this house. But now death and desolation reign here. Death also serves as a symbol for the game. Decisive choice: will the red or black robe of death bring victory? 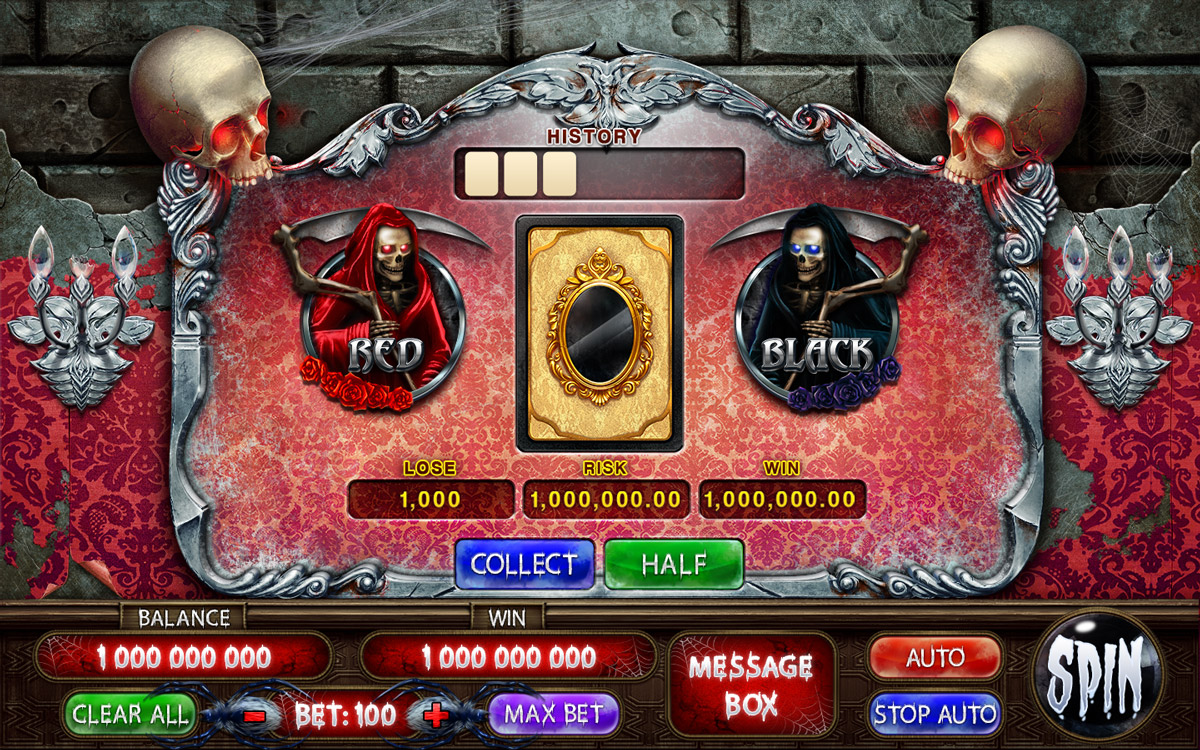 Instead of the traditional inscription, the greeting screen displays a wooden box with a code on the lid. Among this code, the inscription Big Win glows. 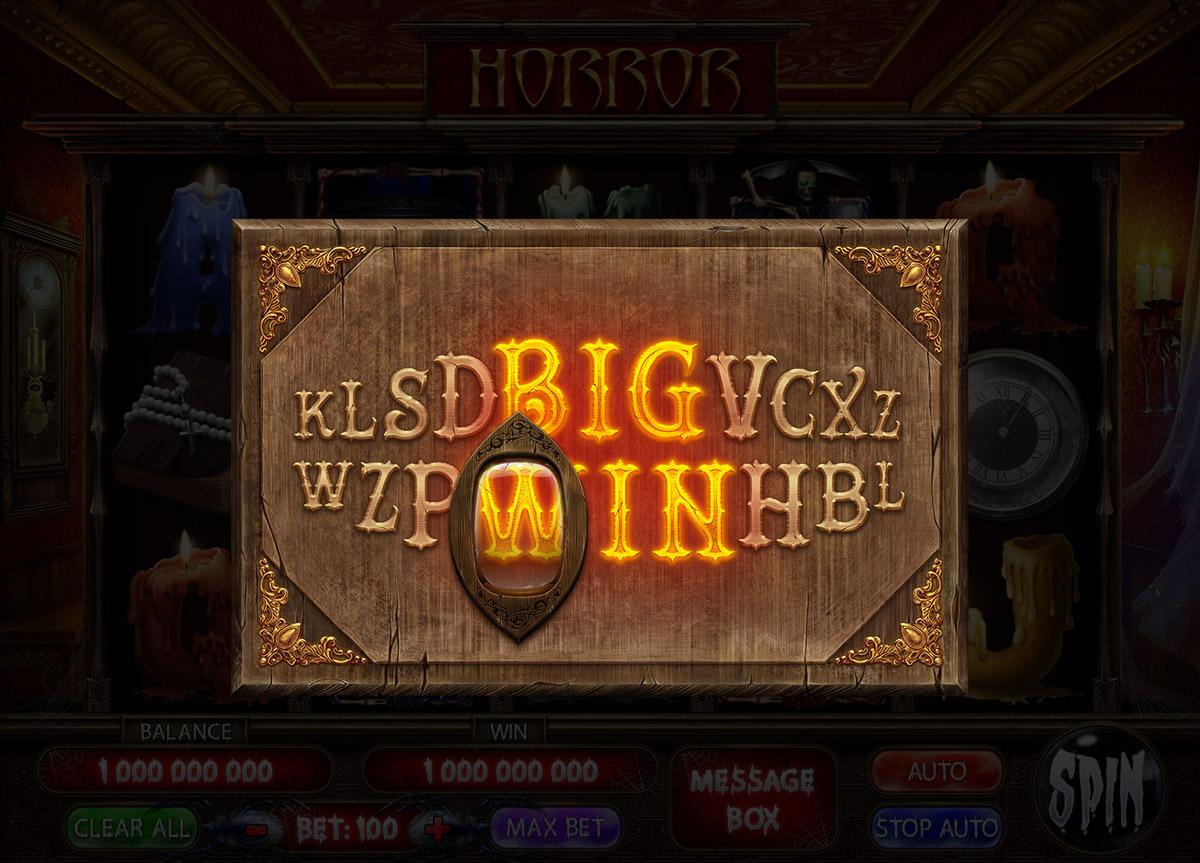 On the animated greeting screen, all the letters are at first the same color and only as the special magnifying glass moves, the Big Win inscription is highlighted in golden color.

There is one more variant of the game background for the slot. This is an image of another abandoned room. Here are the same torn wallpapers and bunches of cobwebs. In addition, there is a window with old curtains. Due to time, the fabric has already been torn. On an old sofa, the upholstery is completely destroyed, which someone was trying to sew with coarse stitches. A forgotten shawl on the back of a rocking chair looks creepy. As if someone had left the room for a minute, but never returned. But the most frightening details are, of course, the trail of the shot in the picture, the blood stains on the carpet and the child’s reflection in the mirror. At this background, the paytable appears. 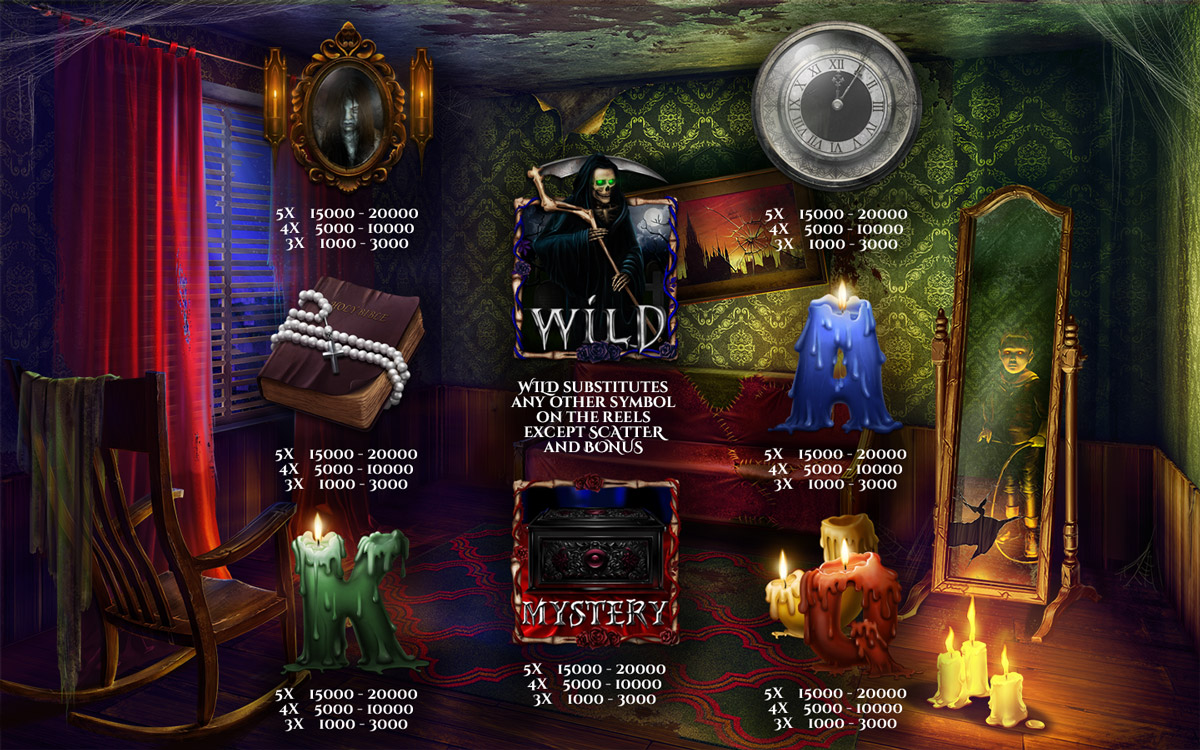 The animated paytable screen looks even more intimidating. Candles are burning in the room, and the chair sways evenly, as if an invisible person was sitting in it. The picture breaks down from its place at the moment of the shot, and the boy’s reflection gradually appears in the mirror. 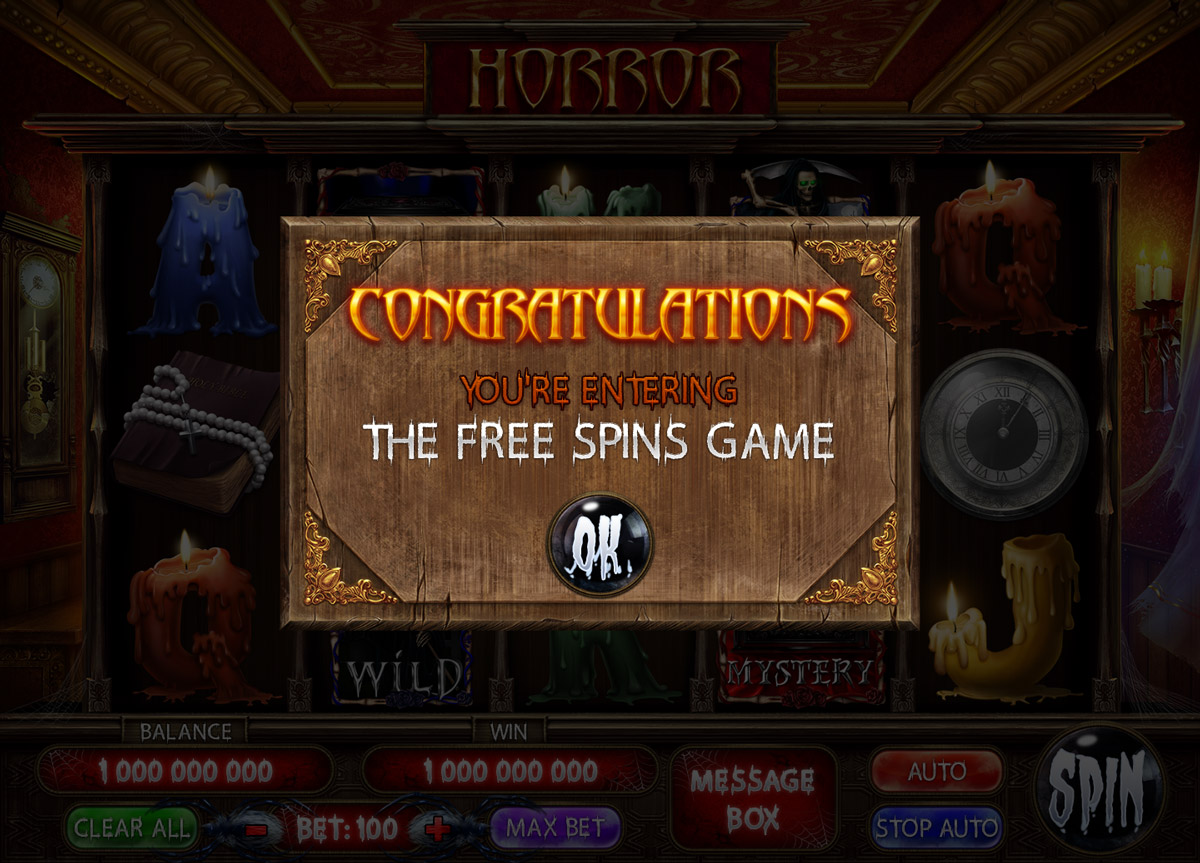 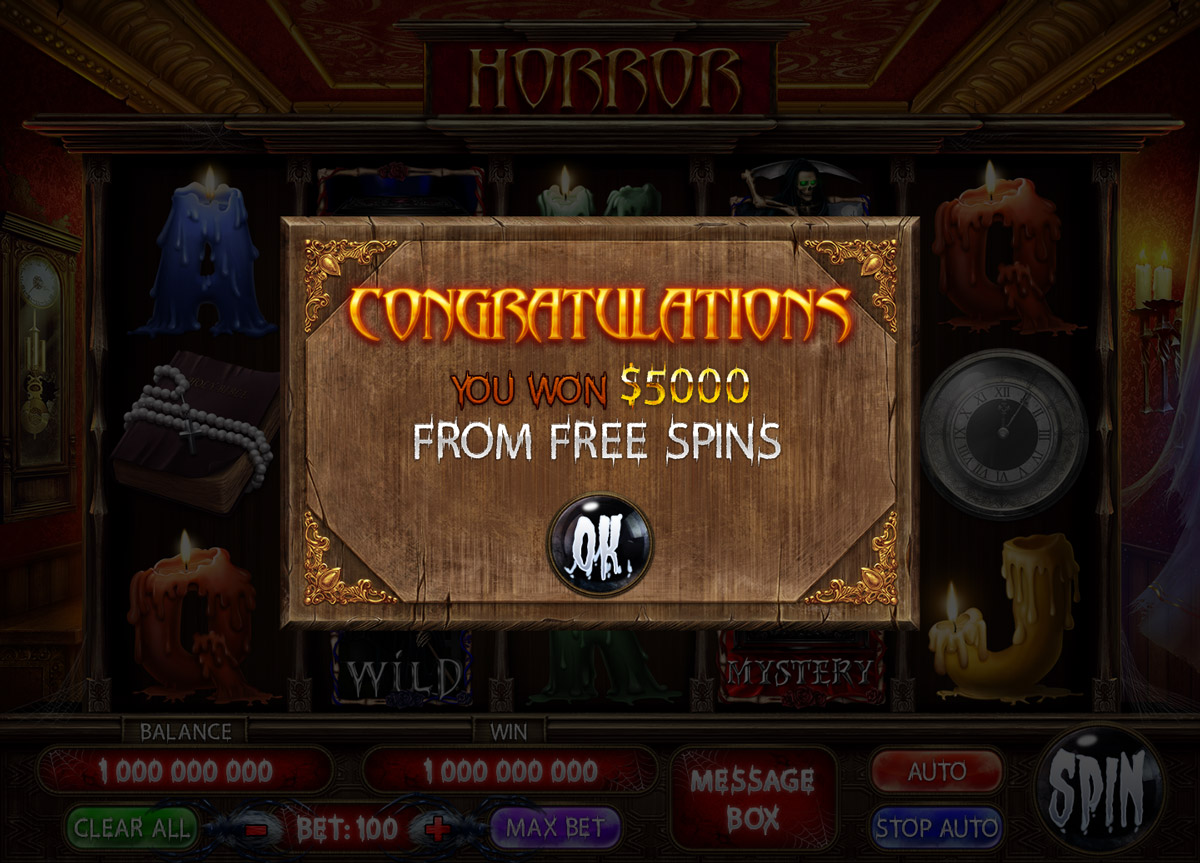 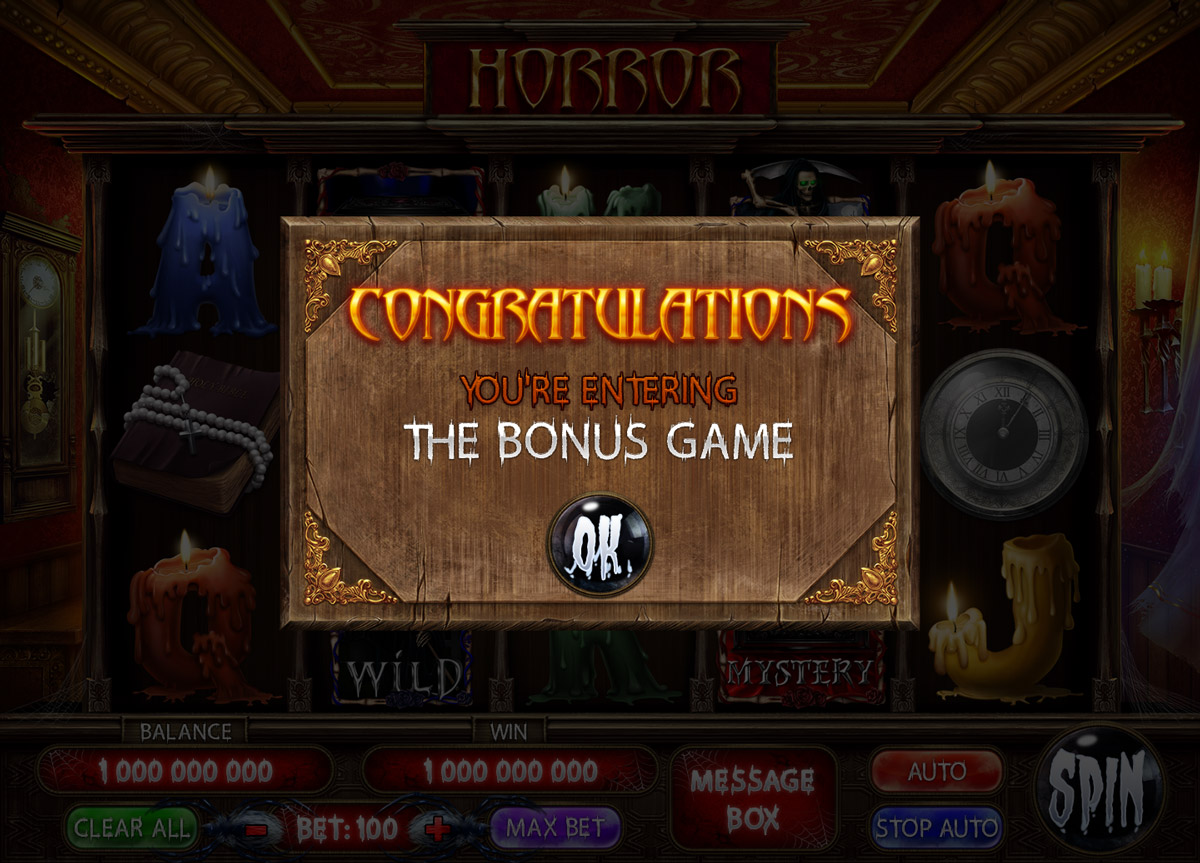 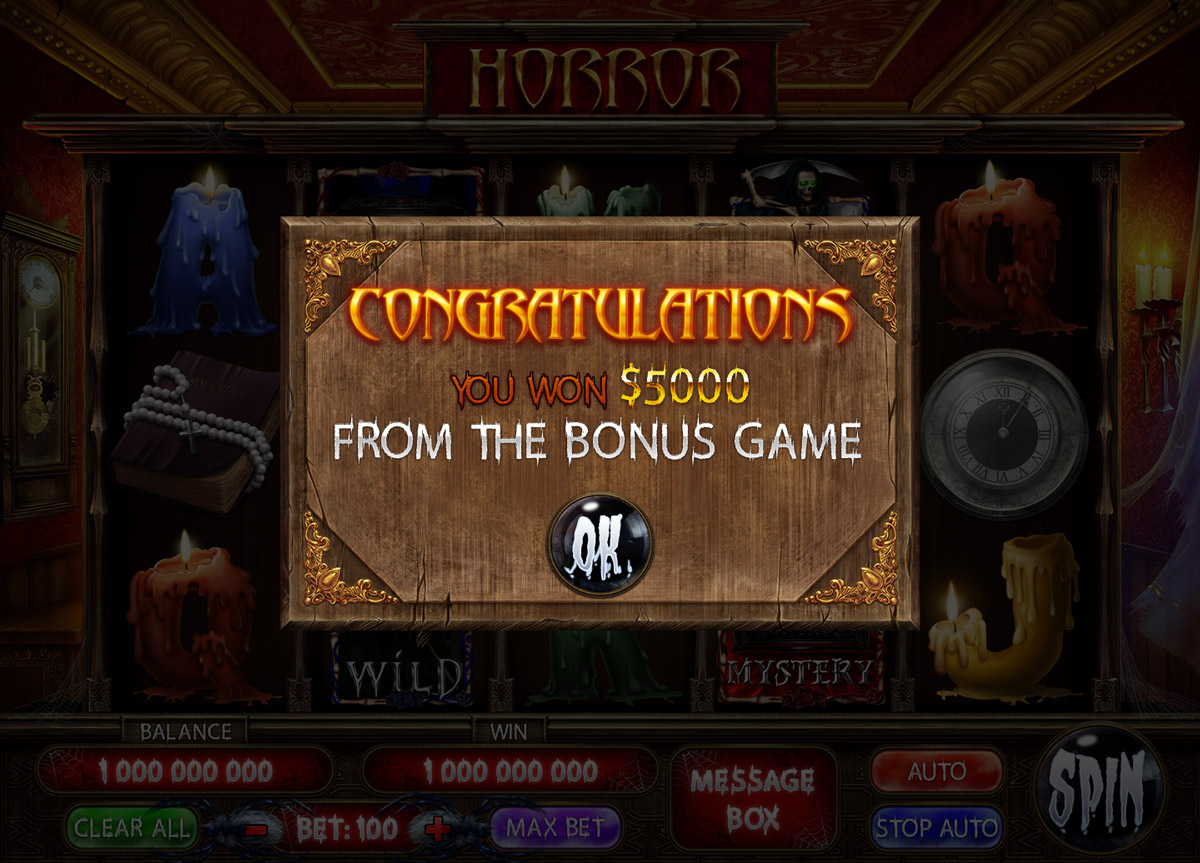 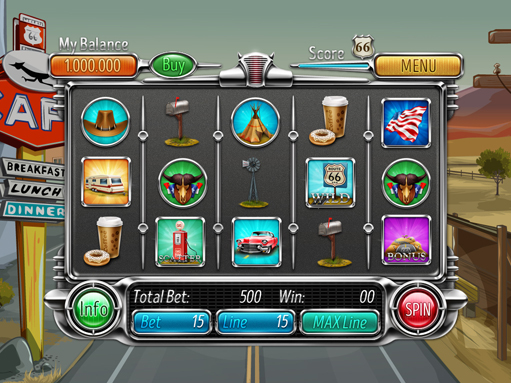 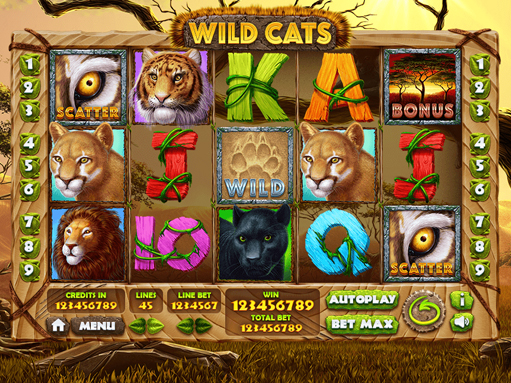