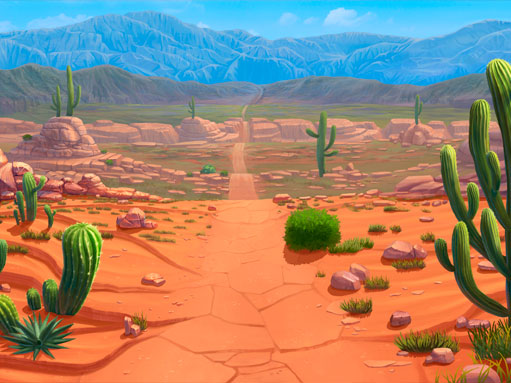 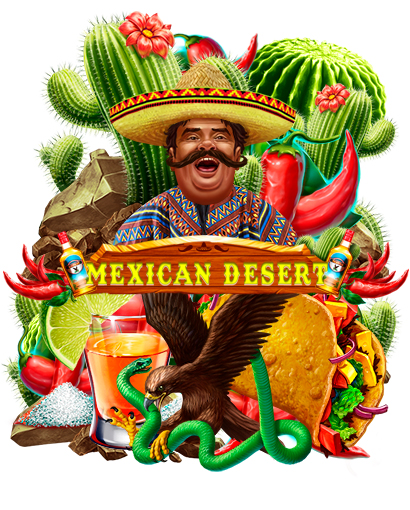 Mexico is always a firework of sensations. Bright sombreros delight the eye, the heady aroma of tequila gives a heady feeling of lightness, and appetite wakes up from thoughts of such a variety of sauces. All the best that Mexico attracts tourists is collected in the slot “Mexican Desert”. Welcome to the world of impressions!

The game reels are decorated in bright colors. It complies the whole Mexican culture – the same expressive and filled with the sun. Every detail is thought out and carefully drawn. The title of the slot is shown on the top of the wooden tray. It is decorated with tequila bottles and hot chili peppers. One glance at this sign is enough to understand: it will be really strong. Instead of a traditional frame, this frame is decorated with cacti – constant symbols of Mexico. The rich dark and light shades of orange in the gaming sectors convey the warmth of the hot air of the Mexican desert. From them it blows with the heat of hot sand. Here and there, cactus flowers are visible, and the main element – the Spin button – resembles a colorful sombrero. Touch it – and a bright whirlpool of excitement will spin. If you are interested in our new product, you can purchase it at our store – https://slotopaint.com/product/mexican-desert/: 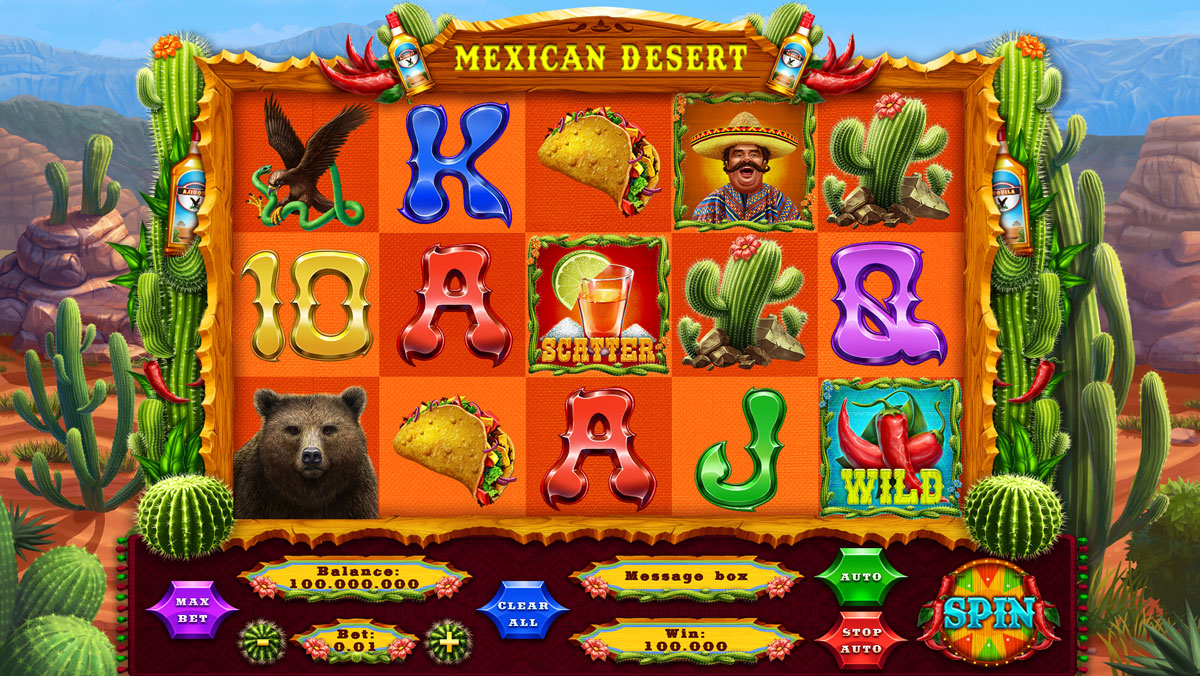 It is impossible to imagine Mexico without cacti, so it is impossible to imagine cacti without desert. The game background depicts a typical Mexican landscape: desert, cacti and mountains. In Mexico, there is the Baja California Peninsula, also called the Desert Planetary Garden. In this place, more than 100 species of cacti grow. And about 80 species can not be found anywhere else! Like in a real park, on the game background you can see cacti, that look like balls and columns, small and huge. The beauty of the area is emphasized by a ridge of mountains on the horizon. 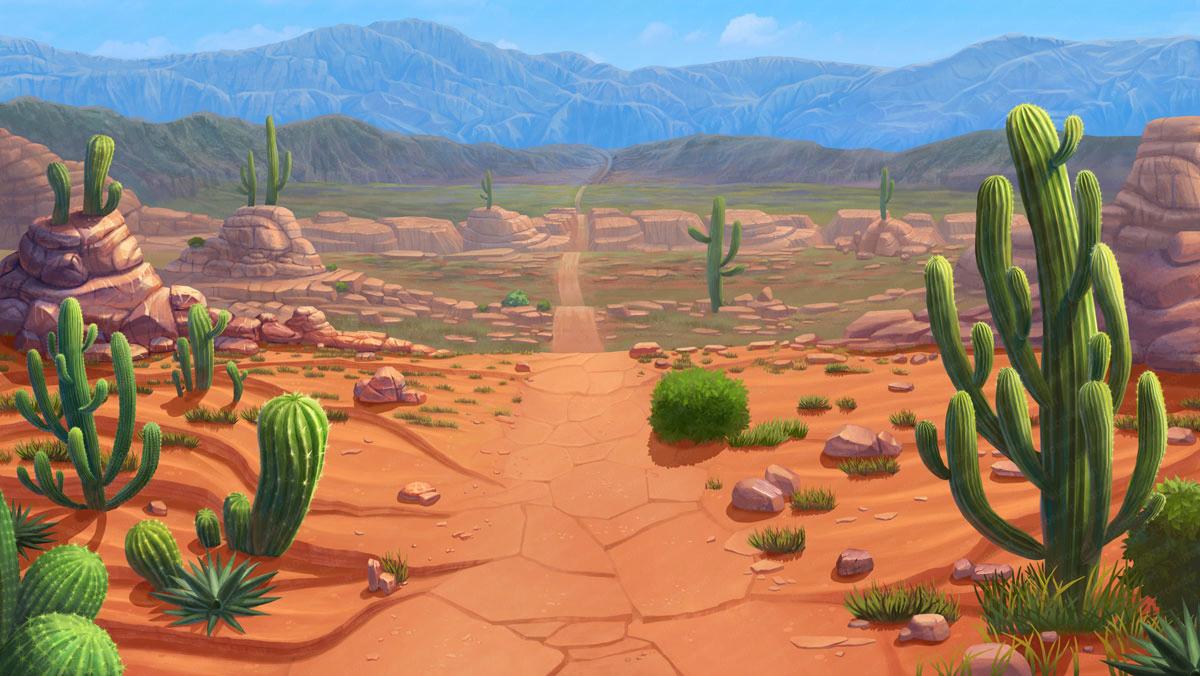 High symbols show the juiciest associations with Mexico. Wild symbol – the most burning symbol of the country – hot chili peppers. Mexican cuisine is famous for its spiciness. In addition, it is Mexico – the leader in the export of chili worldwide! And the very name of chili pepper comes from the Aztec language from the territory of modern Mexico. Scatter symbol – tequila with the same salt and lemon. Every tourist, traveling to Mexico, knows for sure: you need to bring tequila as souvenirs. This incomparable alcoholic drink from agave juice is produced only in Mexico! There is even a legend about the origin of tequila. If you believe the stories, in the time of the Aztecs the gods sent lightning and fell into agave. Juice began to flow out of the crack in the plant. An unusual smell attracted the inhabitants of the nearest tribe. The Aztecs tasted fermented juice, mistook it for the gift of the gods and since then learned how to make tequila on their own. Today, tequila is a matter of national pride in Mexico. The third symbol introduces players to a colorful local resident. A man in a bright poncho and sombrero seems to be very pleased with his life. He sings, and his magnificent mustache emphasizes a hot temperament. All High symbols are decorated in a square frame of interwoven cacti.

Regular symbols convey the details and character of life in Mexico. Lovers of the animal world in a conversation about Mexico will definitely remember the Mexican grizzly bear – a species of brown bears that became extinct in the middle of the last century. Unfortunately, until the 50s of the 20th century, Mexican grizzlies were hunted without control. When this species of bears was on the verge of destruction, hunting for them was banned. But, alas, the population could not be saved. We see such a brown Mexican grizzly on one of the symbols. Another symbol depicting animals of an eagle and a snake is not just a picture. This is the coat of arms of Mexico. In the original, the eagle that eats the snake sits on a cactus. The coat of arms embodies the legend of the founding of the Aztec city. The Indians believed that the sun god Witsilopochtli ordered the Aztecs to settle where they saw an eagle with a snake in its beak on a cactus. This place turned out to be a valley on the western shore of Lake Texcoco. There they founded the city. Another symbol, a cactus, although it is not the official emblem of Mexico, but is strongly associated with it. Cacti are everywhere. Locals even use them as a hedge! And finally, the famous Mexican cuisine. In the slot, it is represented as tacos – a traditional tortilla dish with filling and salsa sauce. The fillings for tacos are varied, which is why Mexican cuisine is so popular. Both vegetarians and meat-eaters will find tacos to their liking.

Low symbols – classic card symbols. The stylized font and rich colors of the symbols support the atmosphere of the game. 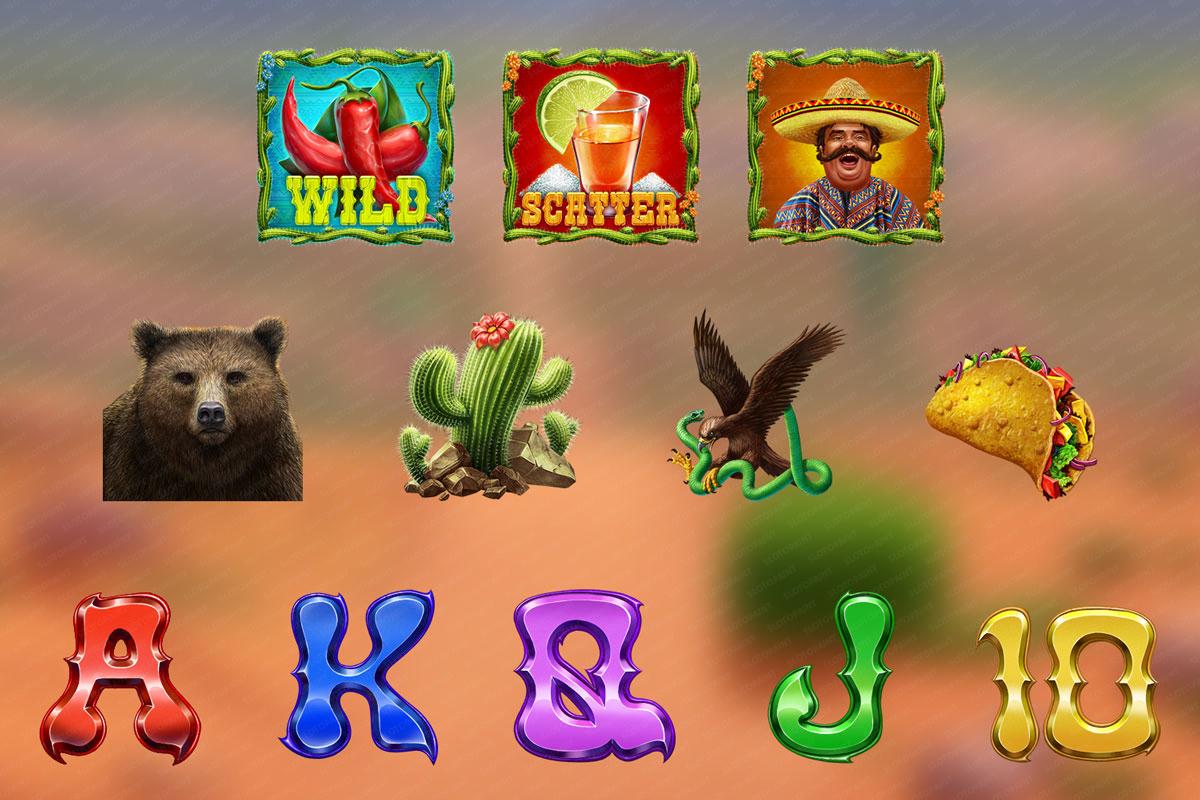 Pay tables on design are similar to the game reels. The frame is also designed as a wooden tray with pointed edges. Cacti, chili peppers and bottles of tequila are used as decor. 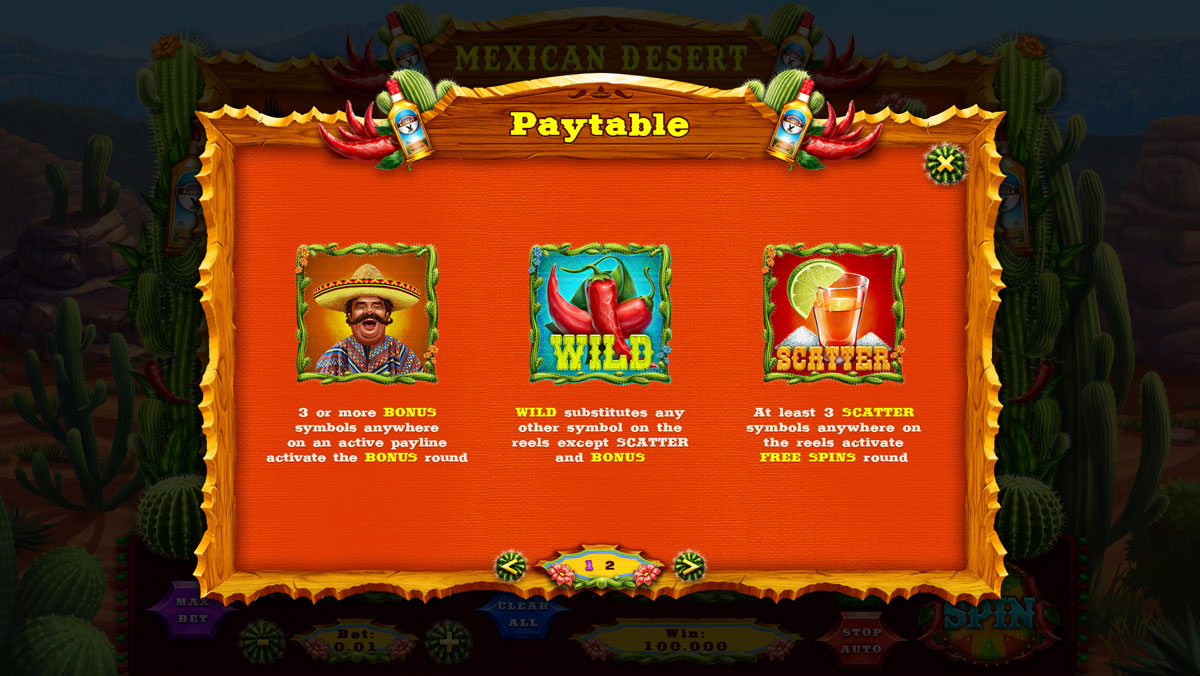 Even the page switching buttons resemble a cut cactus. The Mexican desert is felt throughout. 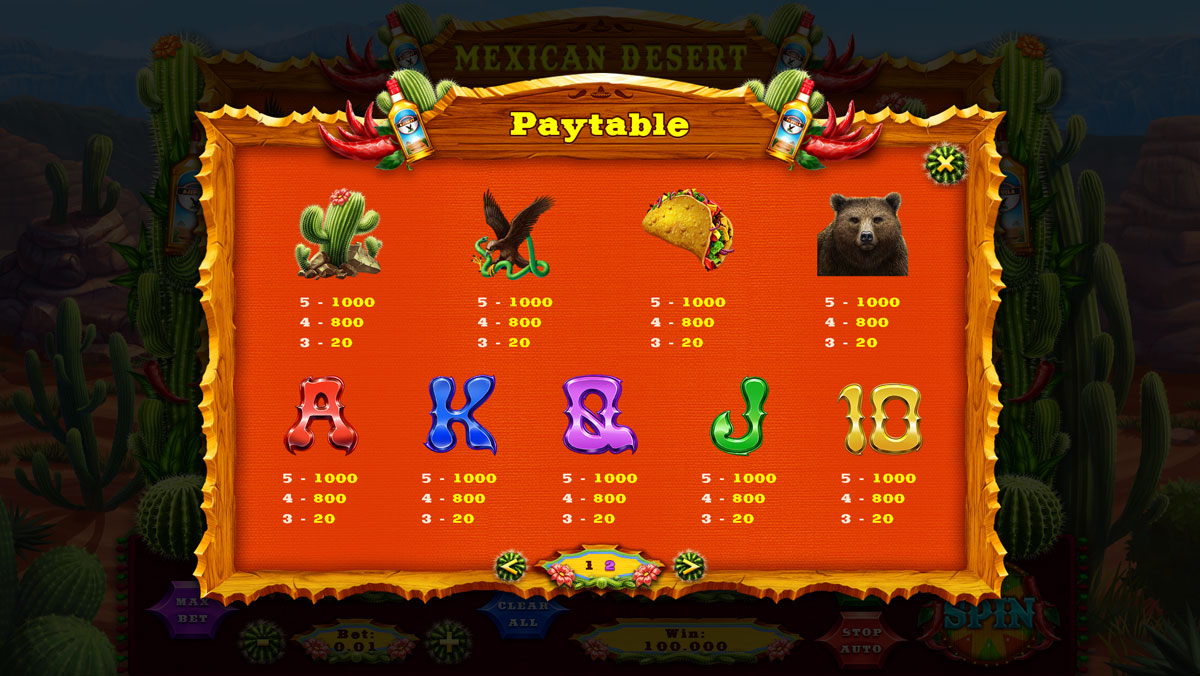 Congratulatory screens are decorated in the form of a traditional rug with bright tassels at the edges. 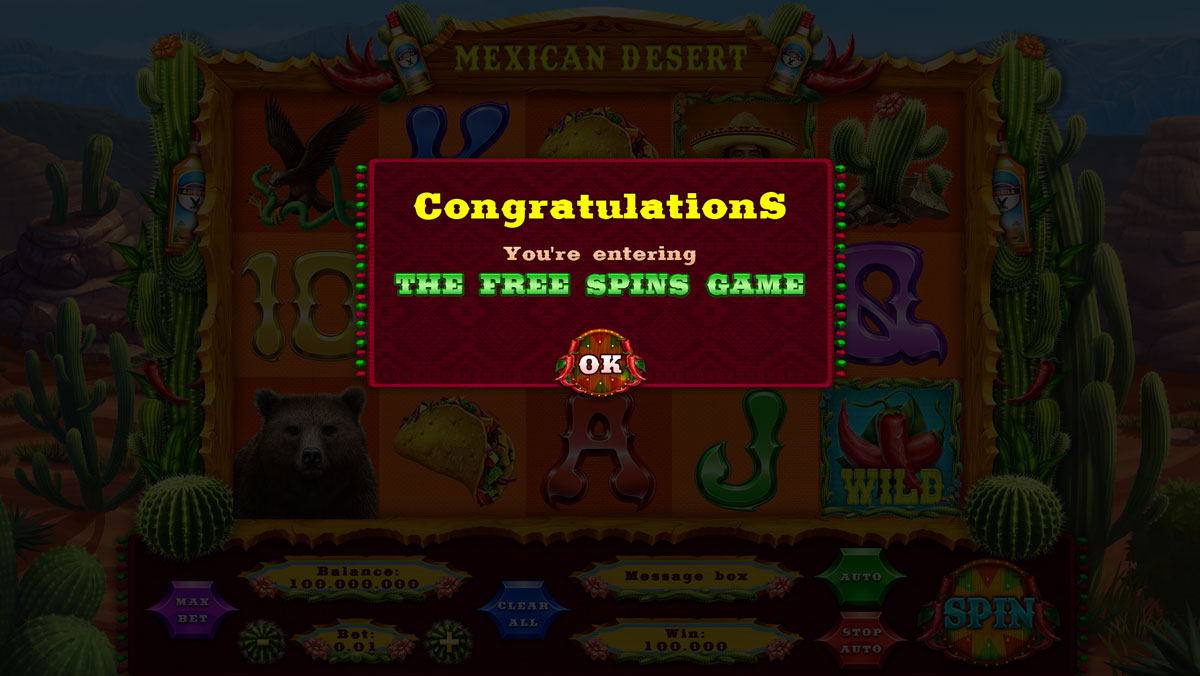 Textile products from Mexico are highly regarded throughout the world. Bright poncho, blankets, carpets – this are another symbols of the country. 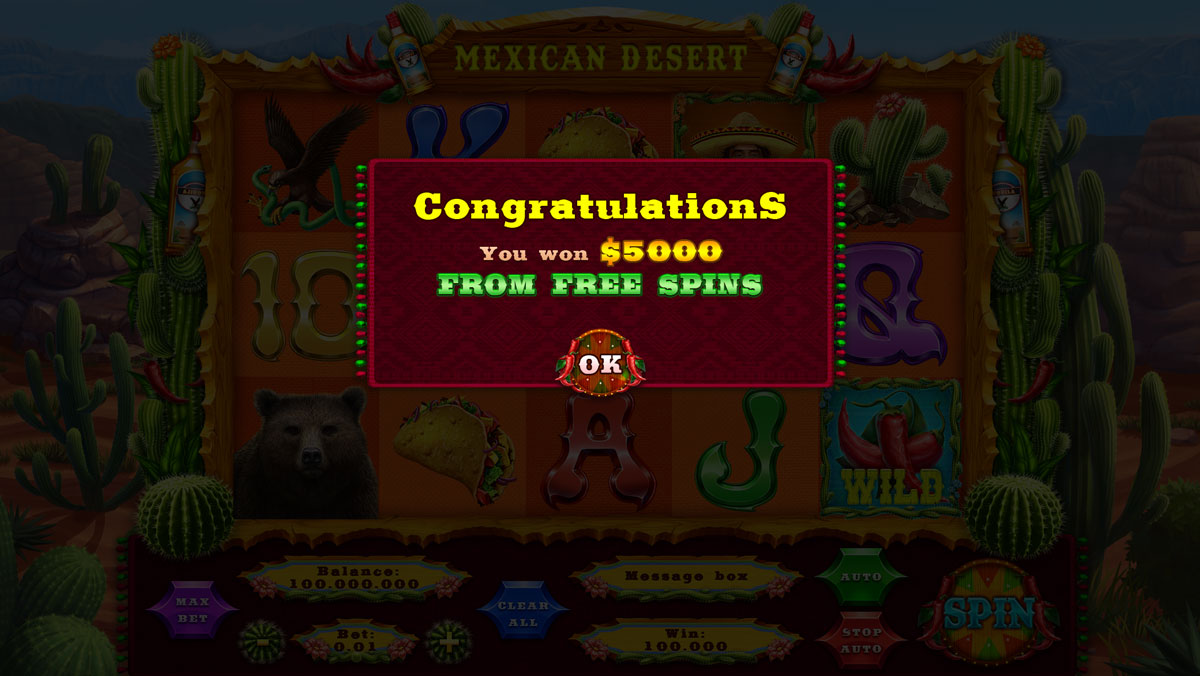 A congratulatory title on the dark red carpet looks very colorful and corresponds to the atmosphere of the slot. 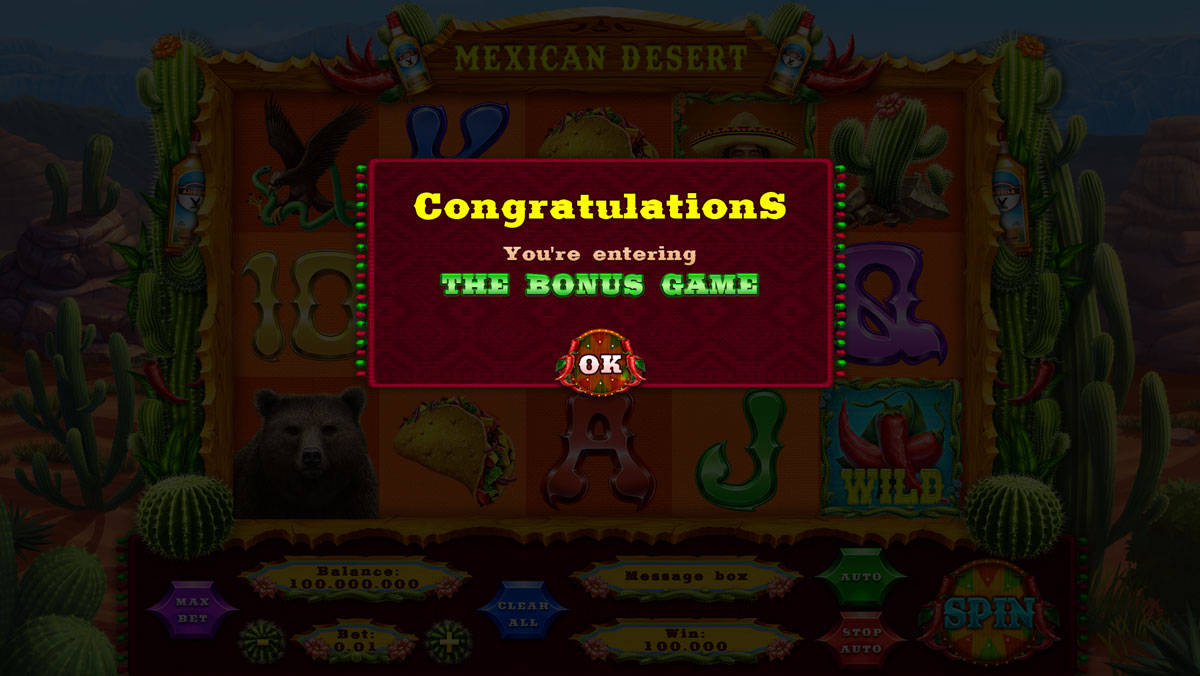 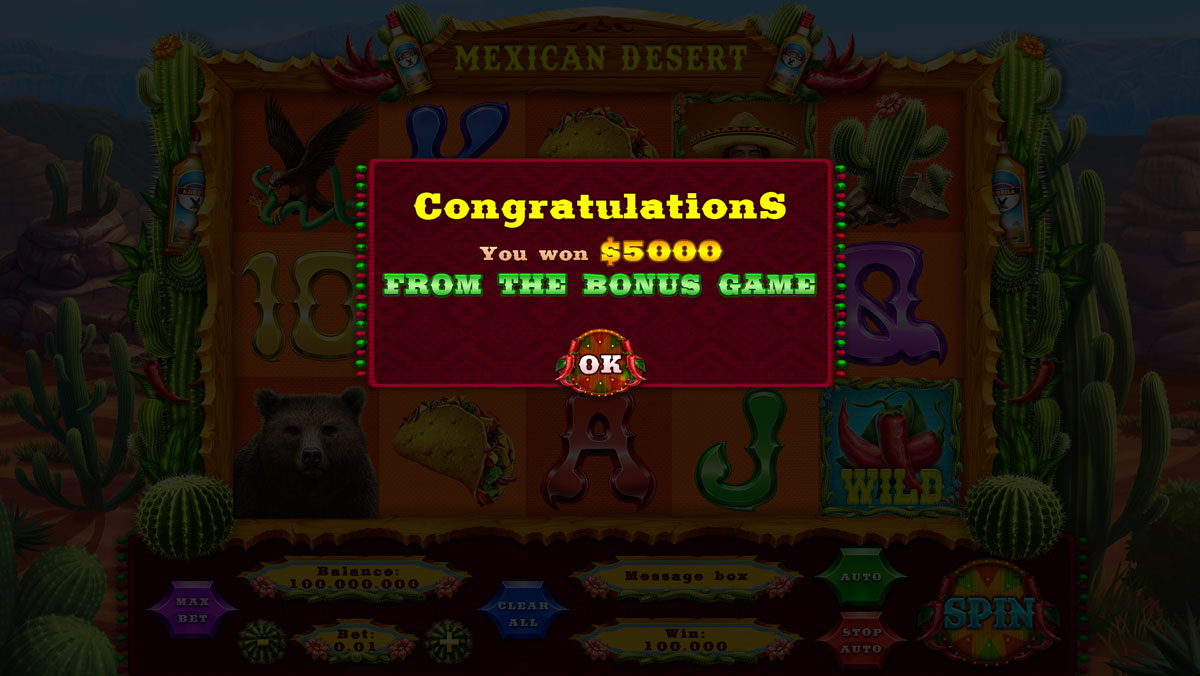 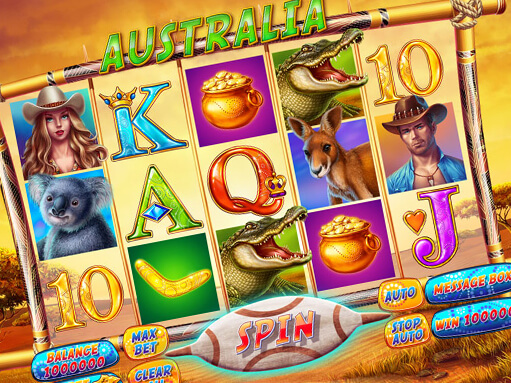 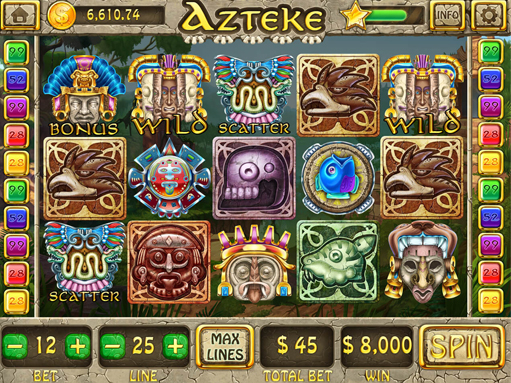 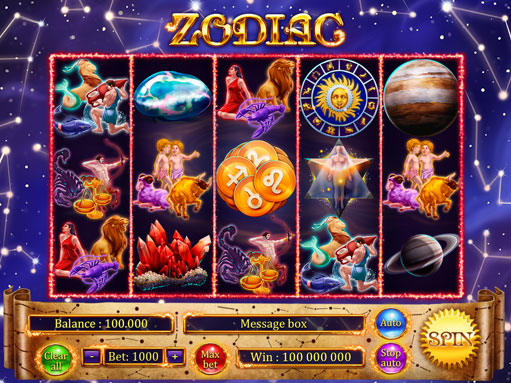