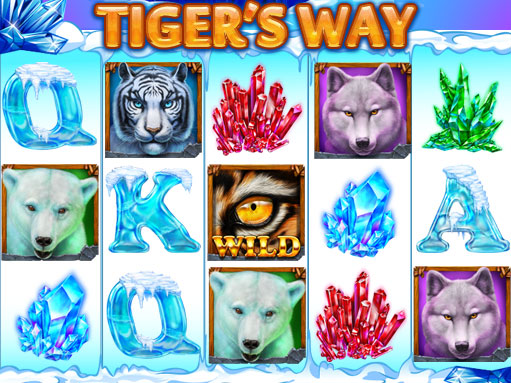 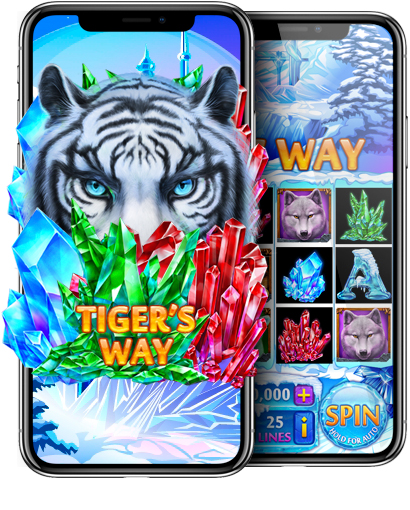 The noble tiger is often used as a symbol of valor, protection, and nobility. And in 2018, it was the white tiger that became the mascot of the Winter Olympic Games. The same white tiger can become a mascot for players in the world of online casinos. Online Slot “Tiger’s way” takes players into the magical world of ice and extraordinary gems. The design is reminiscent of fantasy. In reality, white Bengal tigers live in India, Nepal and Myanmar. But their color is much better suited for camouflage among the ice. Therefore, in the universe of the game, the white Bengal tiger went to the North to demonstrate his strength and endurance among the snow. And this world is already here, it’s ready to take players into its captivating spaces. You just need to open the game on your smartphone. If you are interested in this product, you can purchase it at our store – https://slotopaint.com/product/tigers-way/.

The game reels are designed in a color scheme that harmoniously blends with the general background. The reels frame is made in blue and white shades. In the lower left corner, there is a place for the player’s avatar. The green line shows the progress of the game. In the lower right corner there is a “Spin” button. It is made in the form of a block of ice. 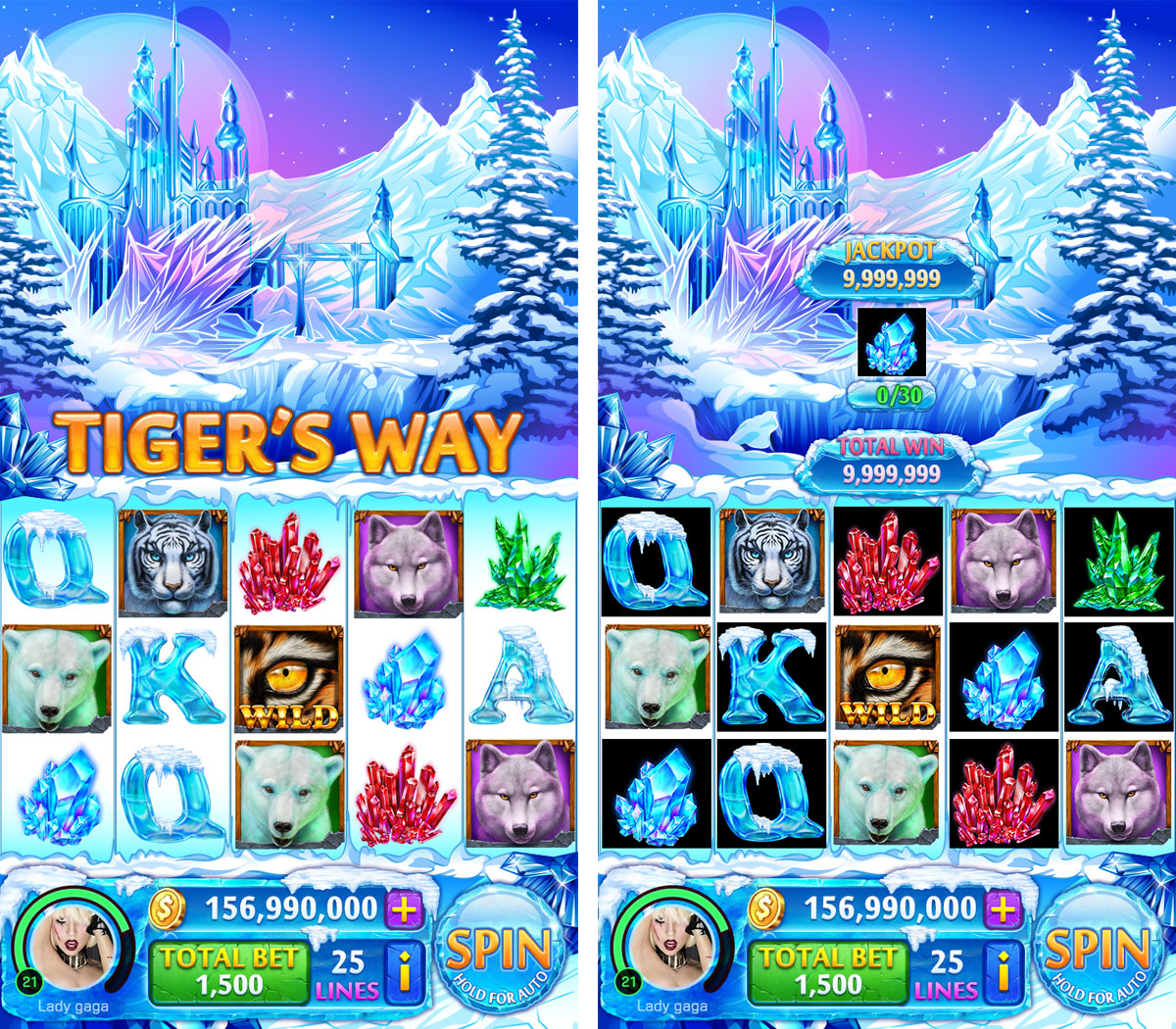 The gaming background perfectly matches the fantasy world presented in the slot. Spectators can see an extraordinary castle, either of ice or of crystal. The towers shimmer in shades of blue and pink in the rays of the Northern Lights. The huge moon is mesmerizing and does not allow you to look away from the screen. Tall spruces stand of the sides, like silent guards. Snow on their branches lies in an even layer. But it seems that now the branch may tremble, the snow is about to crumble from it, and a huge predator will emerge from behind the tree. 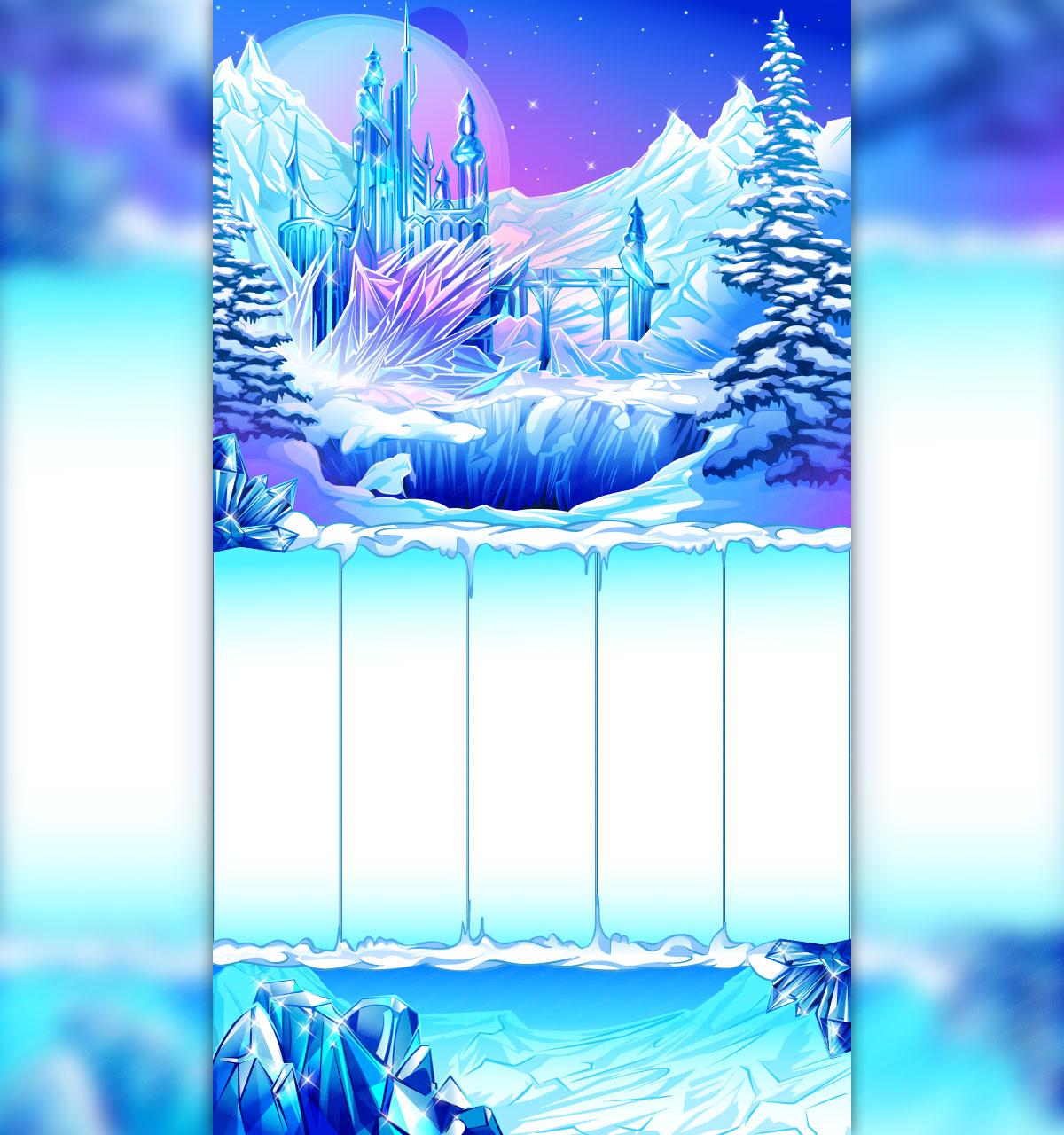 The high symbols depict powerful predators. Look at the white tiger first. In nature, it is a rare mutation of the Bengal tiger. The peculiarity of white tigers is blue eyes. It is such a beast that looks at the players from the screen. With their rare color, these tigers attract special attention and delight.

But the tiger is not the one predator in the slot. Next to him is a polar bear – the largest of all bears. Moreover, it is the second largest land-based predator! Polar bears are listed in the Red Book. As a symbol of greatness and strength, the polar bear often appears in cultural works. For example, the peoples of the north believe that polar bears embody the formidable forces of nature.

Another predator of the North is the polar wolf. The harsh living conditions made the polar wolf unusually hardy. And here he is before us: a handsome beast with thick fur and piercing gaze of amber eyes.

Wild symbol – a tiger’s eye in the usual orange-black color. Recognizable stripes make it clear which animal is lurking on the other side of the screen. All high symbols are decorated in square frames with imitation of wood and stone.

Regular symbols are gems that once again remind of the greatness and mystery of nature. There are sapphires, rubies and emeralds on the screen. All crystals are clean, transparent – these are the stones that are most appreciated. It is possible that these crystals also have magical properties. What if they will bring the players victory?

Royals are classic card symbols. It seems that letters and numbers are made of ice and covered with snow.

The first winnings welcome screen highlights the combination of symbols on the reel. The numbers appear that indicate the points scored.

The screen with the message about bonus coins is designed like a shining ice floe. The text is well read on a blue background. 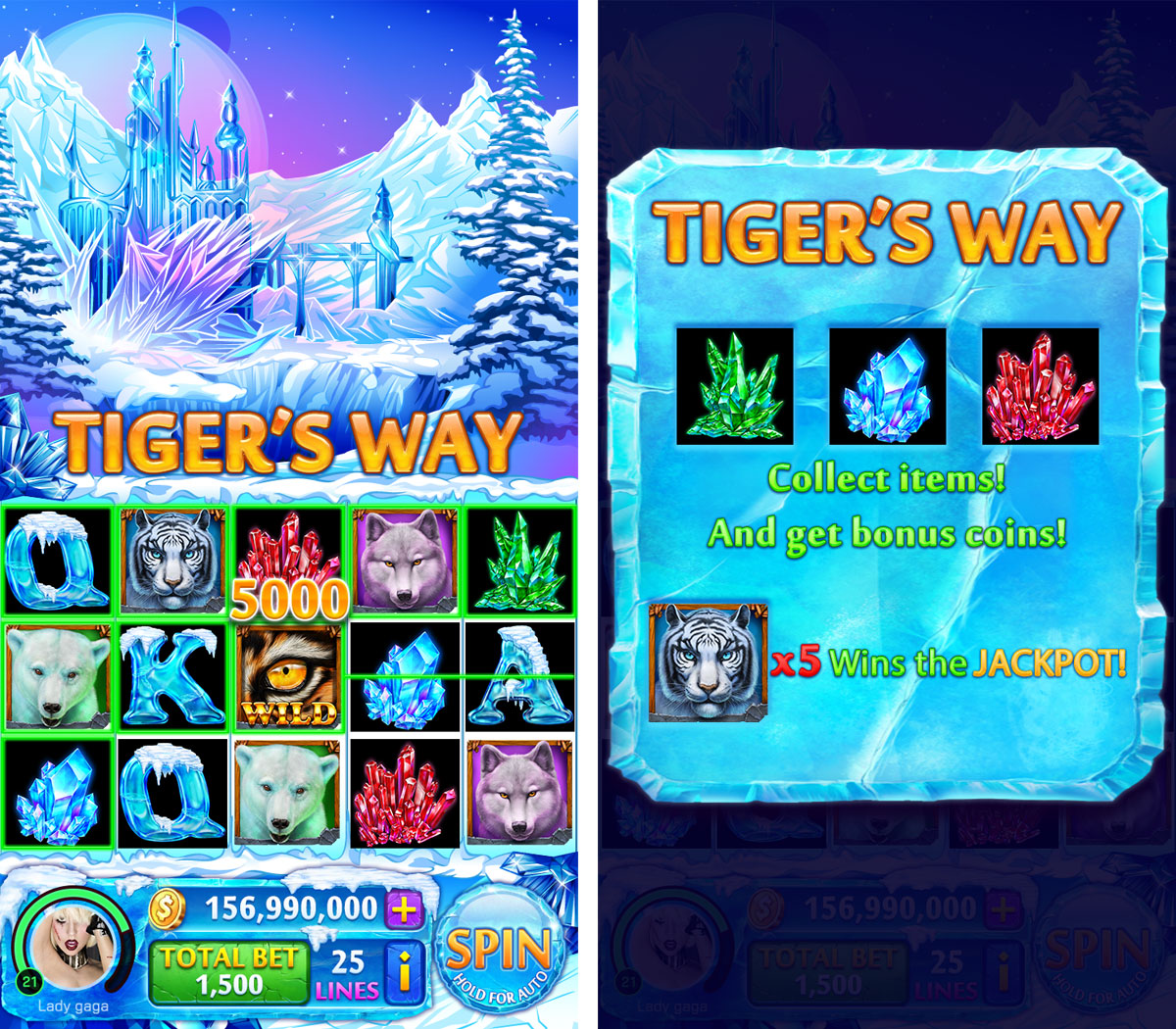 Game reels are darkened on the greeting screens. A text appears with a victory message. The color and size of the text changes depending on the amount of win. 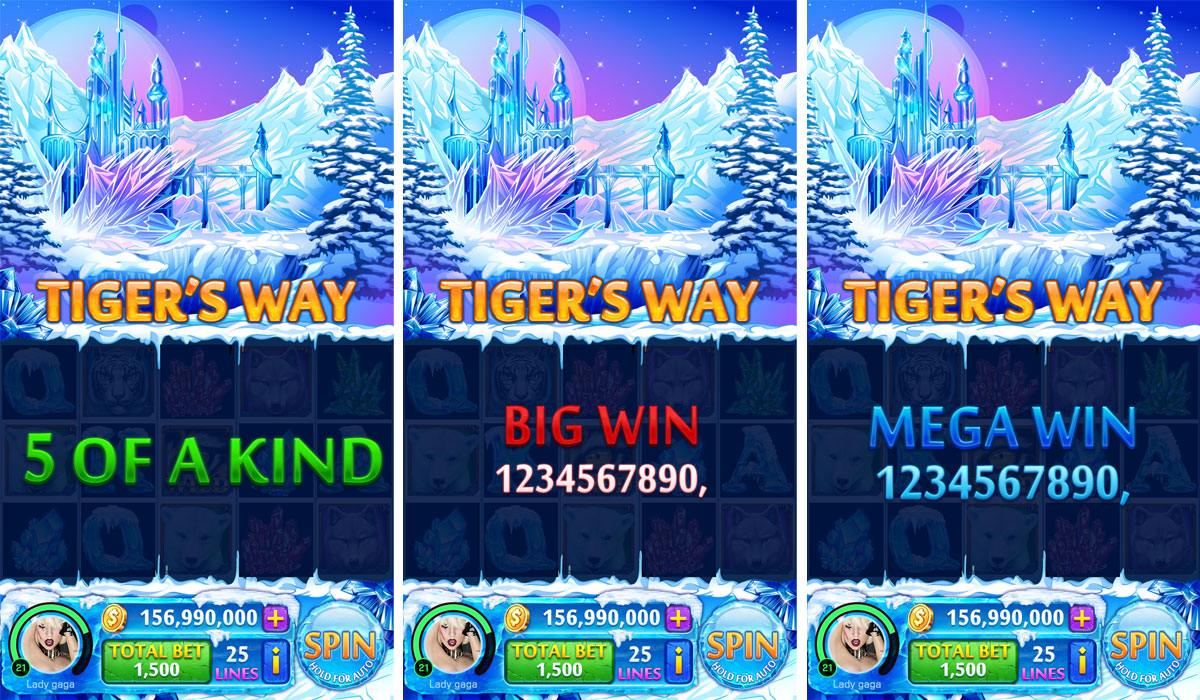 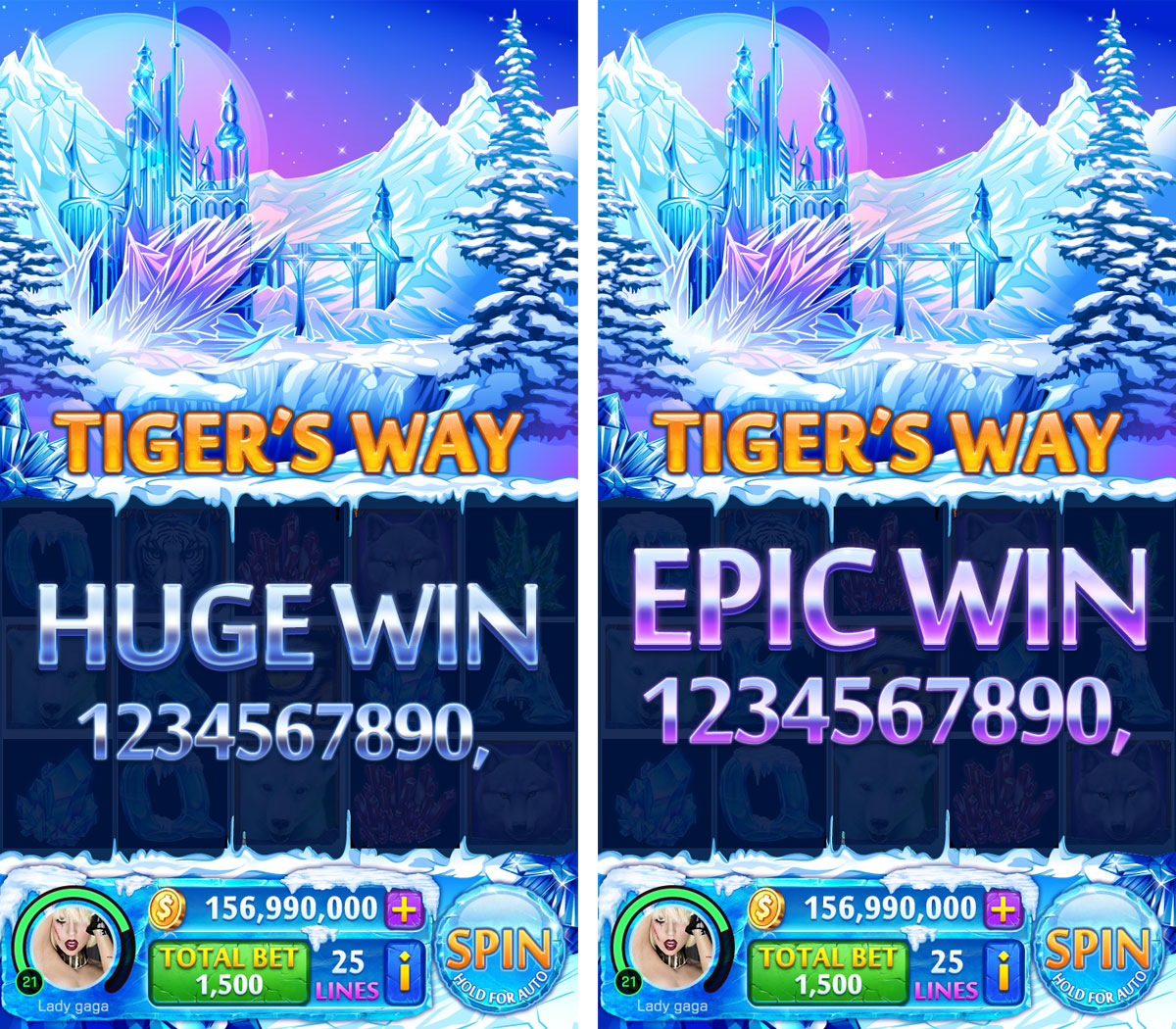 The screens “Quest complete” and “Quest bonus” are made in the form of ice floes. General game background behind them is darkened. 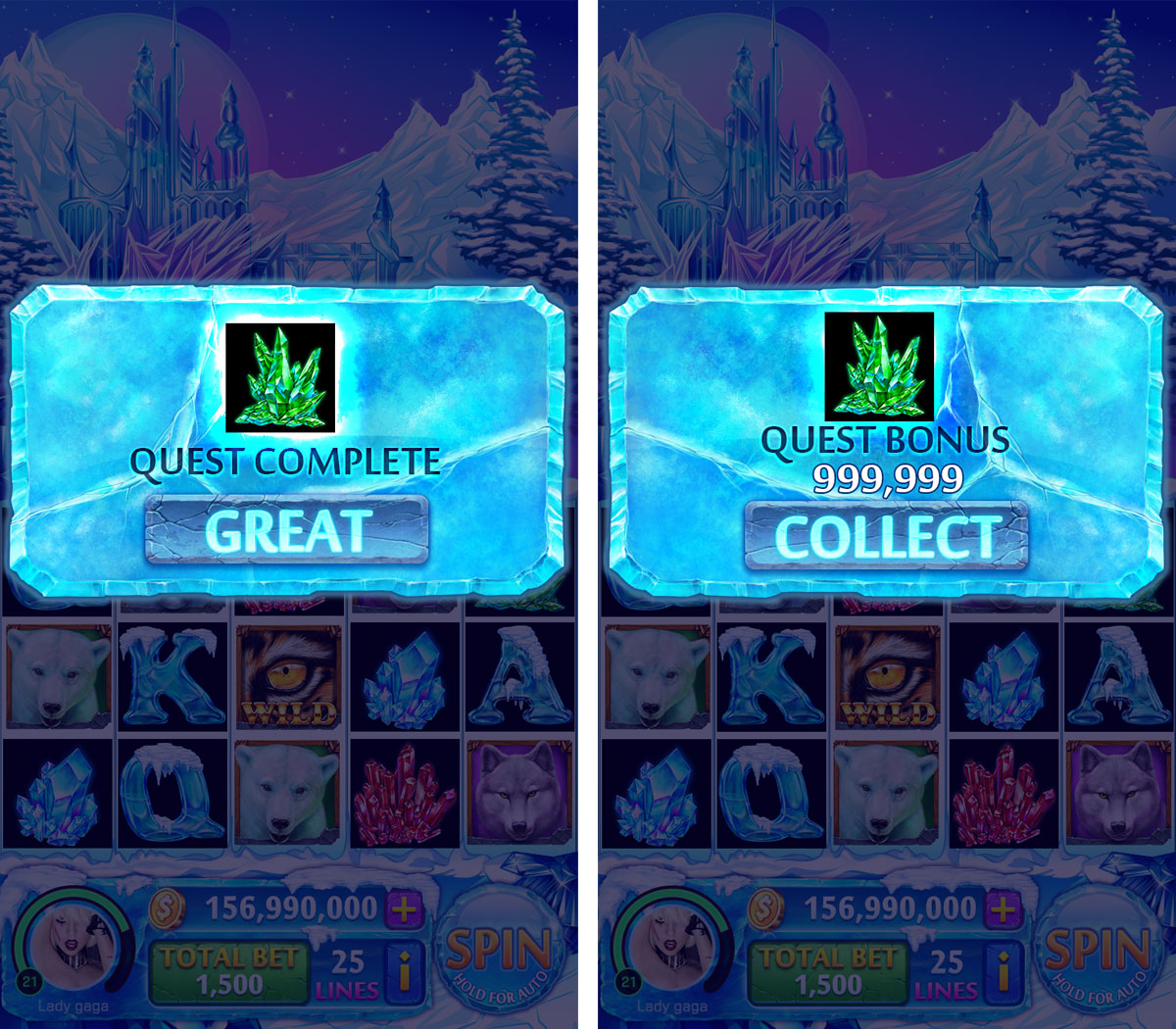 The background is completely darkened when the Jackpot has won. Game screen fills with sparks and a bright large congratulatory inscription appears. 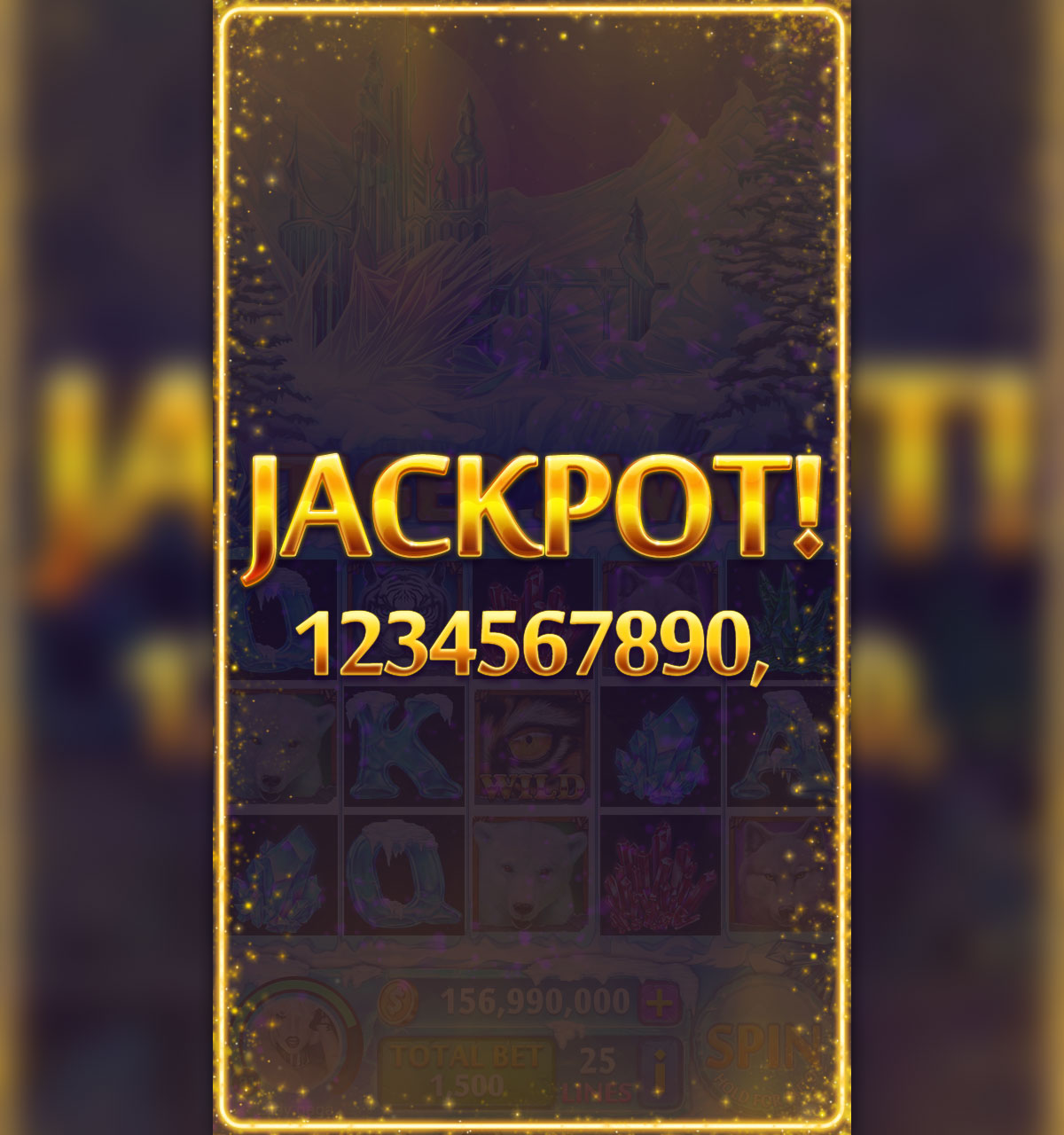 Paytables are similar in design to the game reels. The frame is also shaped like an ice floe and decorated with blue crystals. 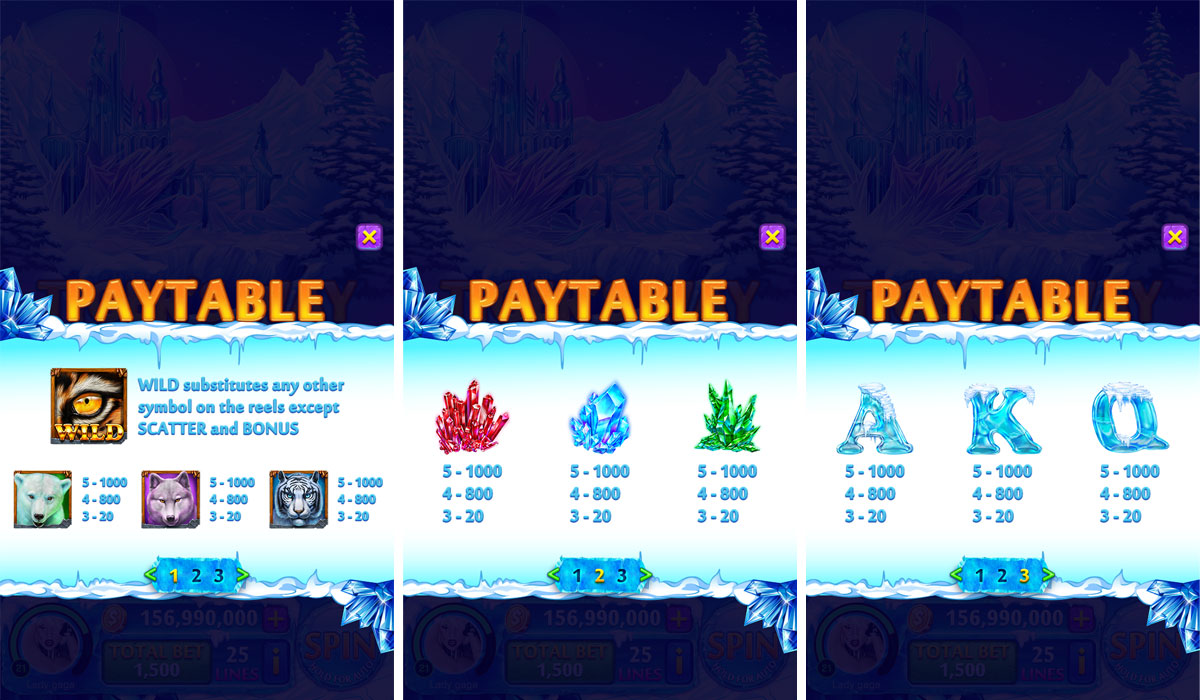 Congratulation screens for bonus games are also placed at a darkened background. The inscriptions are made on the plate that has a form of an ice floe. 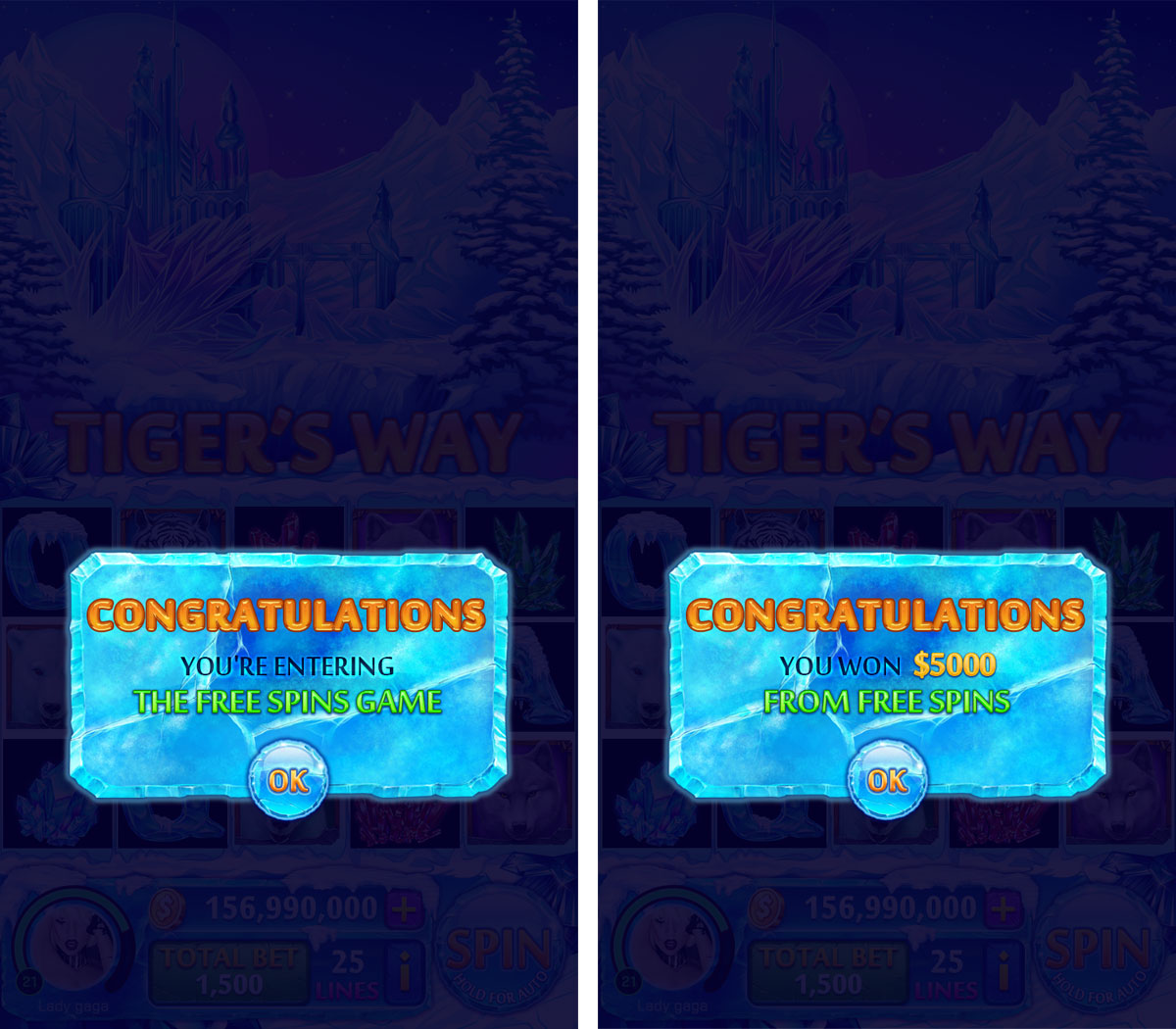 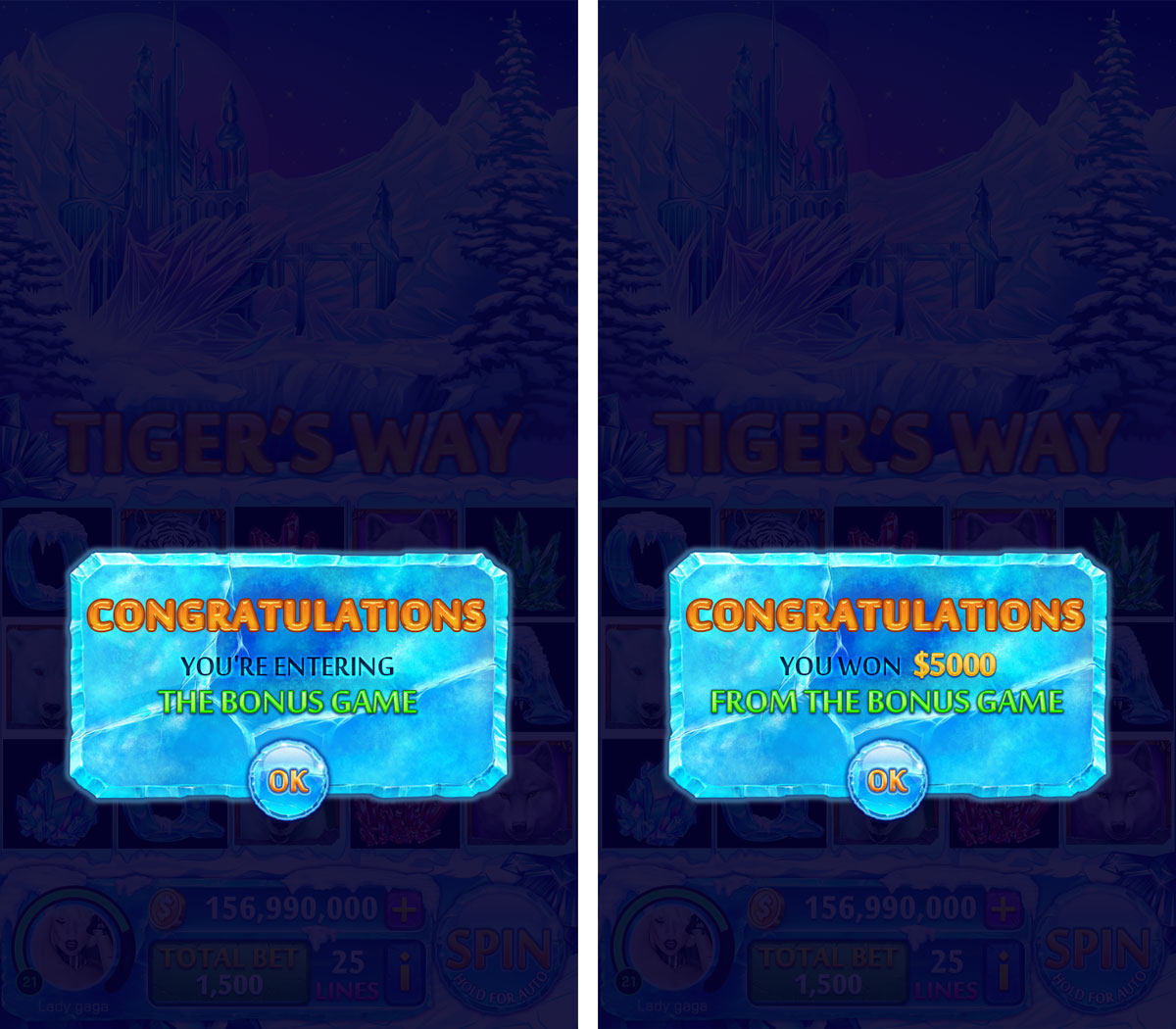 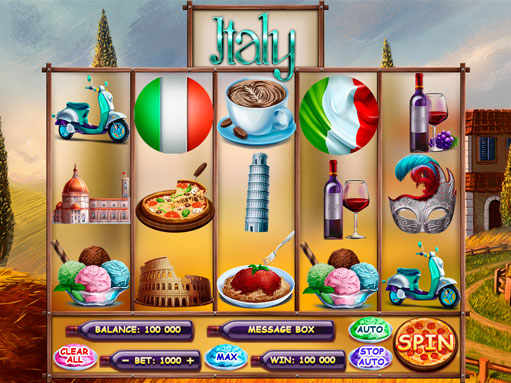 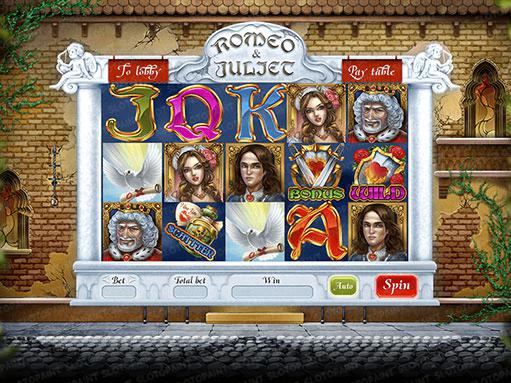 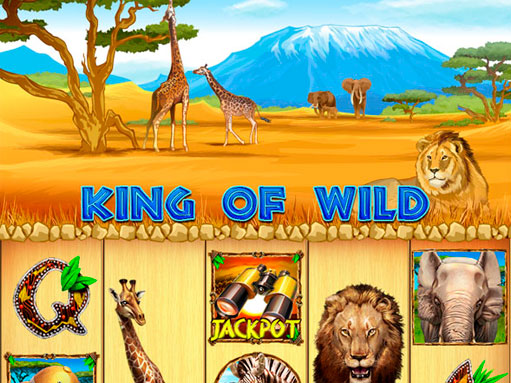