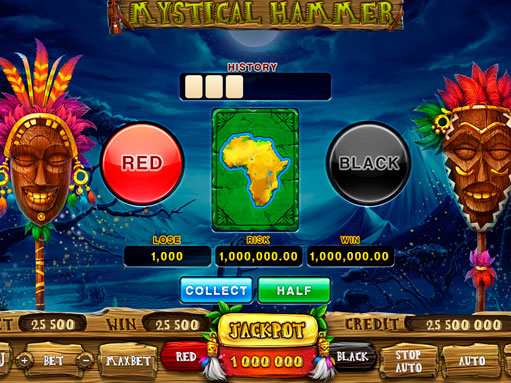 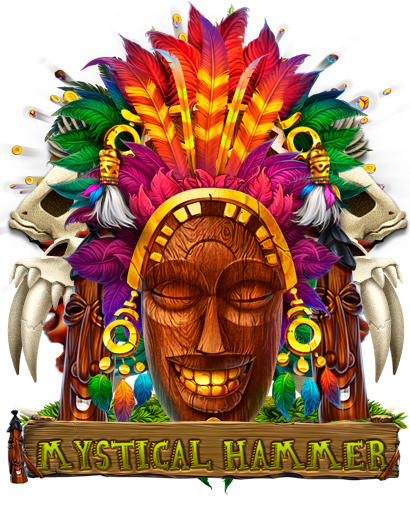 Historically, from the point of view of civilization and culture, Africa is usually divided into the Northern and Southern parts of the continent. Mystical Hammer slot is dedicated to Sub-Saharan Africa. This is a part of Africa where minerals are most concentrated – diamonds and gold. The traditional beliefs of the aborigines and national cultural traditions have also been preserved here. We invite you to take a virtual trip and discover the mysterious ancient continent – Africa. If you are interested in this product, you can purchase it at our store – https://slotopaint.com/product/mystical-hammer/.

Textures of natural materials are used in the design of the game reels. The playing field and panel with control buttons are made in the form of roughly finished wooden surfaces. Individual symbols are places on a background that imitates a stone. A religious mask, brushes with colorful feathers and simple ropes are used as decorative elements. 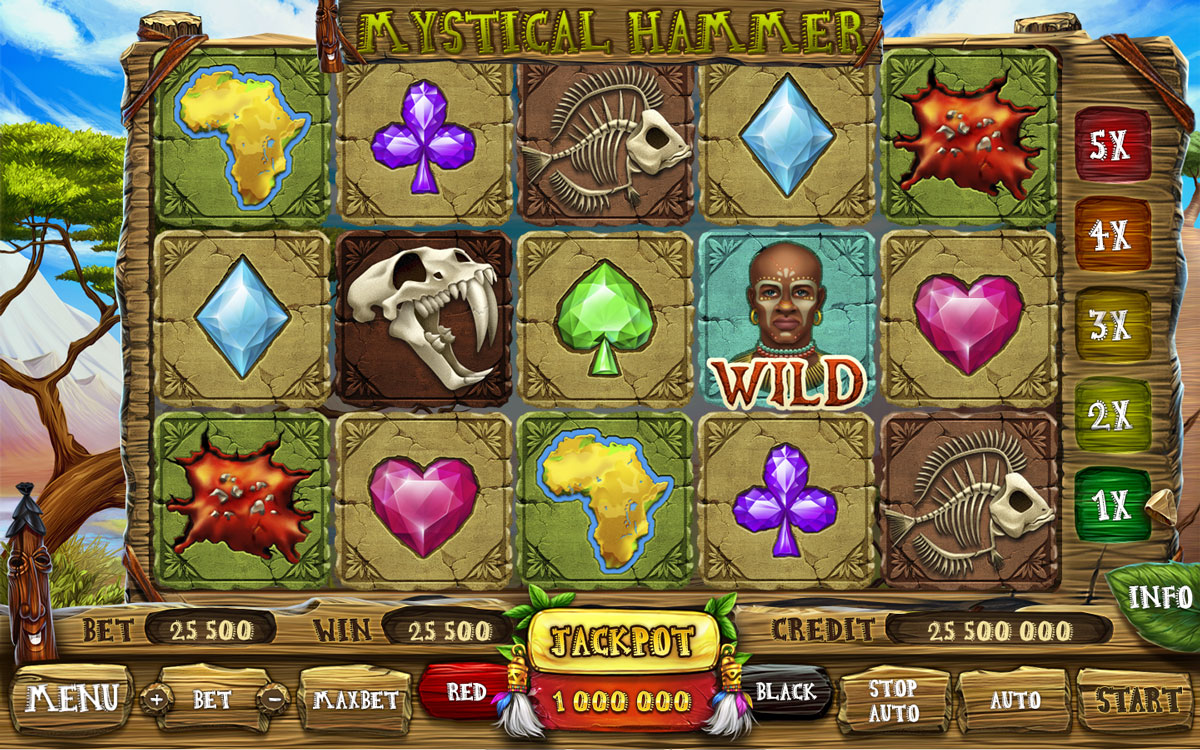 A fragment of the game can be seen on the demo screen. When the symbols are placed on a certain position on the reels, a game character appears – an aboriginal in a traditional costume. He breaks the cells with the symbol with a handmade hammer. Thus, it is clearly shown which symbols are played.

The main character of the slot machine takes an important place in the slot, so let’s take a closer look at him. The only element of aboriginal clothing is a leopard skin loincloth. Everything else is traditional jewelry. Bracelets are visible on the man’s elbows and ankles. On the neck – a necklace with animal teeth. We can conclude that we are faced with a successful hunter or shaman. On his face is a wooden mask painted with bright colors. The head is decorated with large multicolored feathers.

The slot game background reveals a traditional South African landscape for the players. The ground, hot under the sun, was covered with cracks. The grass begins to fade and changes color from green to yellowish. Luscious greenery is still preserved in the shade of spreading baobabs and bottle trees. A ridge of mountains is already visible beyond the river. Rocky peaks rise up to the bright sky. At noon, the animals are not visible: they hide in the shade of trees or their caves. 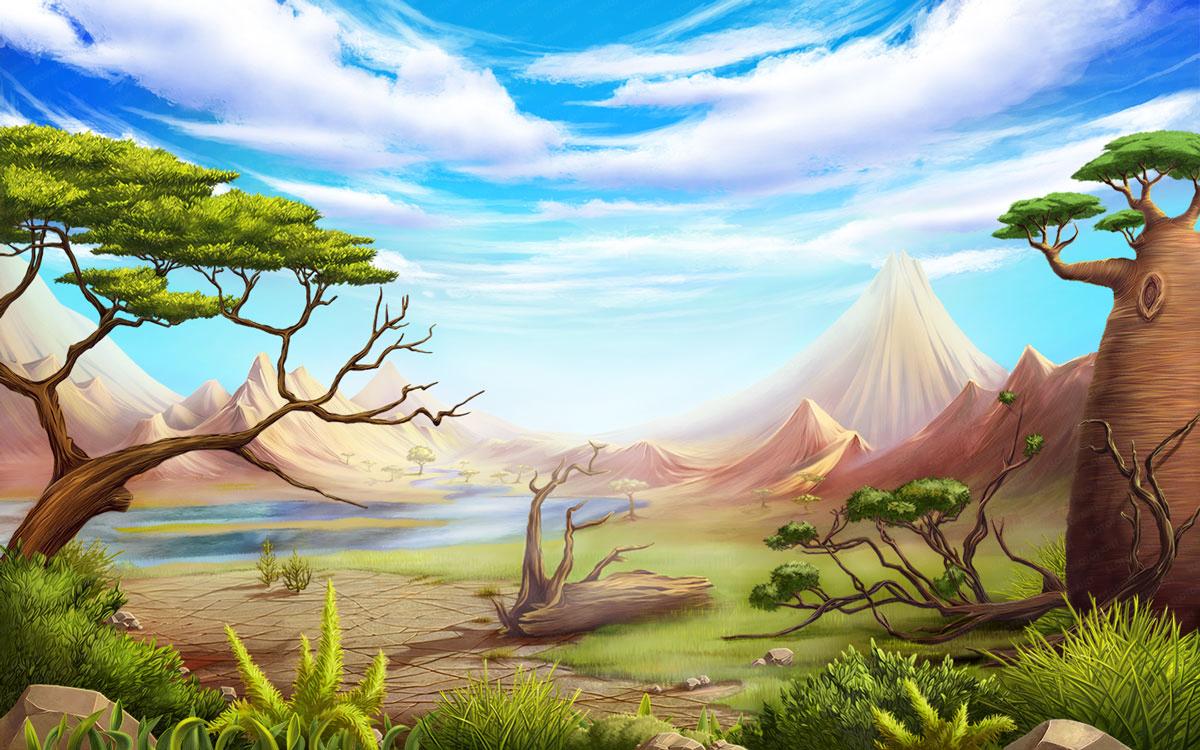 The night version of the game background looks almost mystical. The full moon illuminates the mountains and the silhouettes of trees. The moon is silvery in the moonlight. Fireflies flutter over the bushes and it seems that these are stars descended from the sky. What secrets do these desolate lands hide? Players have to find the answer. 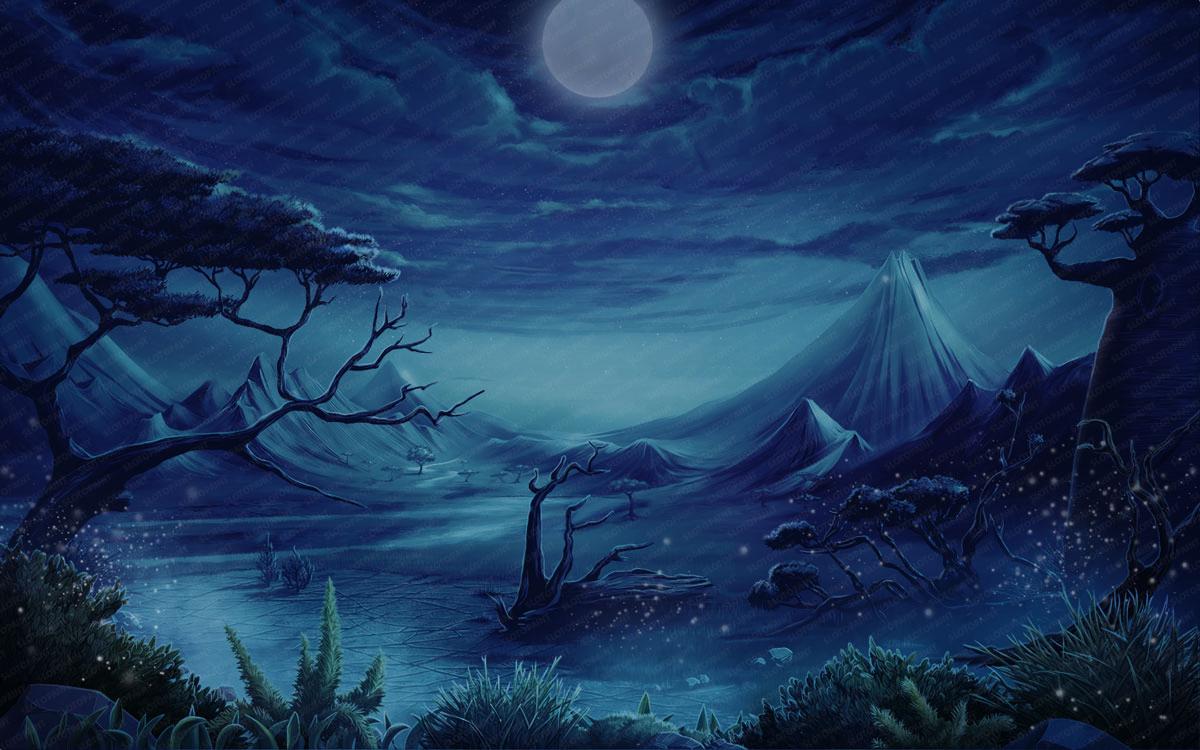 Wild symbol is an image of an aboriginal. Ritual paint is applied to his face. There are large gold earrings in the ears, and on the neck there are two rows of multi-colored beads. Looking at the determined expression on his face, we can tell that he could be a warrior or even a tribal leader.

The next two symbols are fossils that are common in Africa. We see the skull of a large predator and the skeleton of a fish. Over the course of time, these remains merged with the stone. They show how long ago life began on the African continent.

Further two symbols – a contour image of the continent of Africa itself and an image of hot lava. The contour of the mainland is made in yellow. The second symbol is hot lava. The main part of the symbol is made with an imitation of a stone surface. Therefore, the lava in the center of the image looks like it is located in a fault in the earth. Shades from deep red to light orange give the impression of mixing lava layers with different temperatures. You can feel the heat from this symbol.

Four more symbols are depicted in the form of the traditional designation of card suits – diamonds, spades, clubs and hearts. However, each suit looks like a faceted gem. As we have already found out, Africa is famous for its deposits of diamonds and other gems. 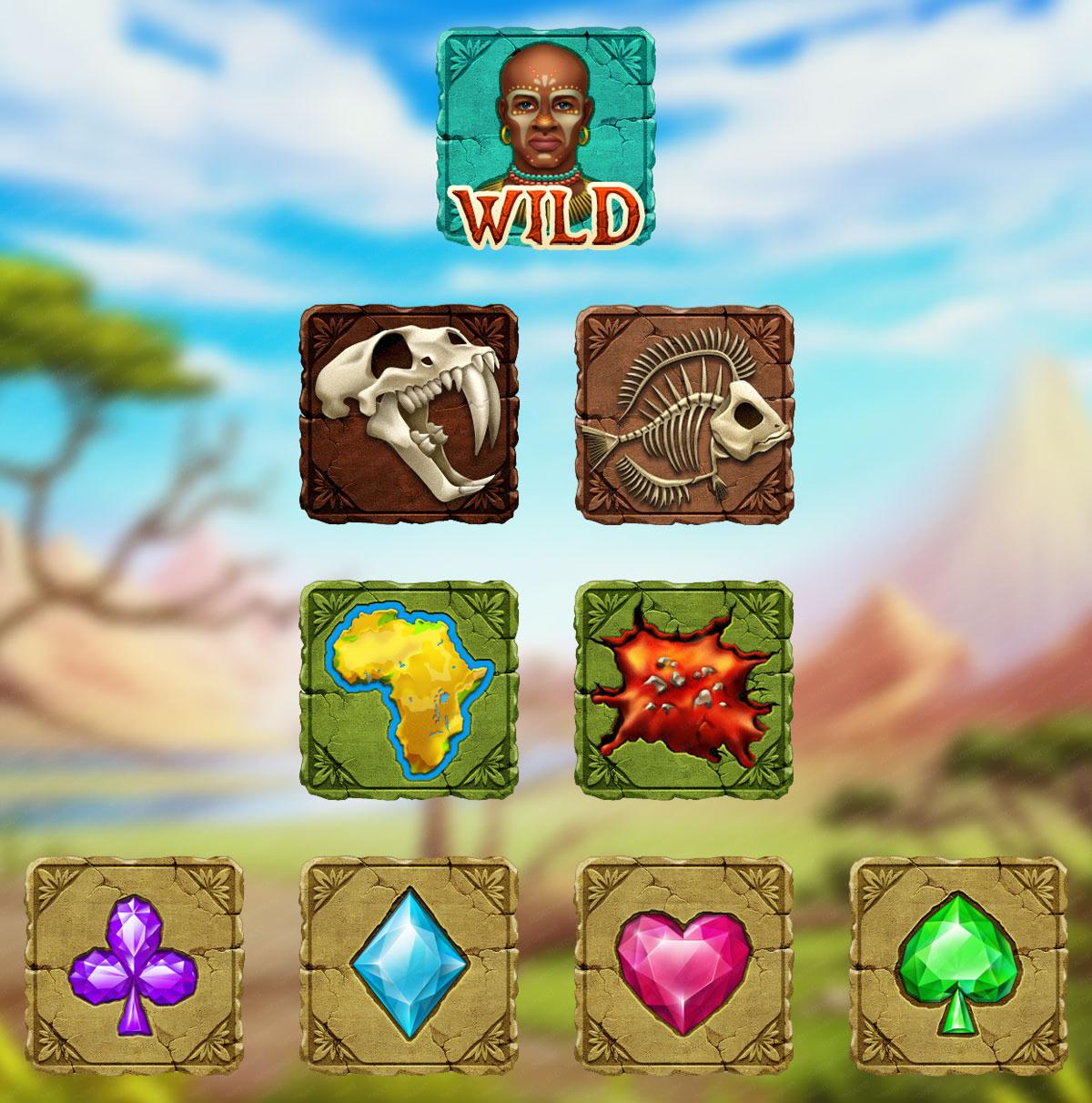 Animated symbols have an interesting effect: for the first moments they look like black and white photographs, but in a few seconds they fill with color and start moving. At the end they seem to explode. Wild symbol animation will be different. This symbol seems to pulsate: it either approaches, then moves away from the players. And only in final it explodes the same way.

In the Risk game, two wooden masks appear in front of the players. One depicts a deity in a female form, and the second in a male. Two buttons – black and red – invite you to make a choice. Players only have to decide which of the buttons will bring them win. 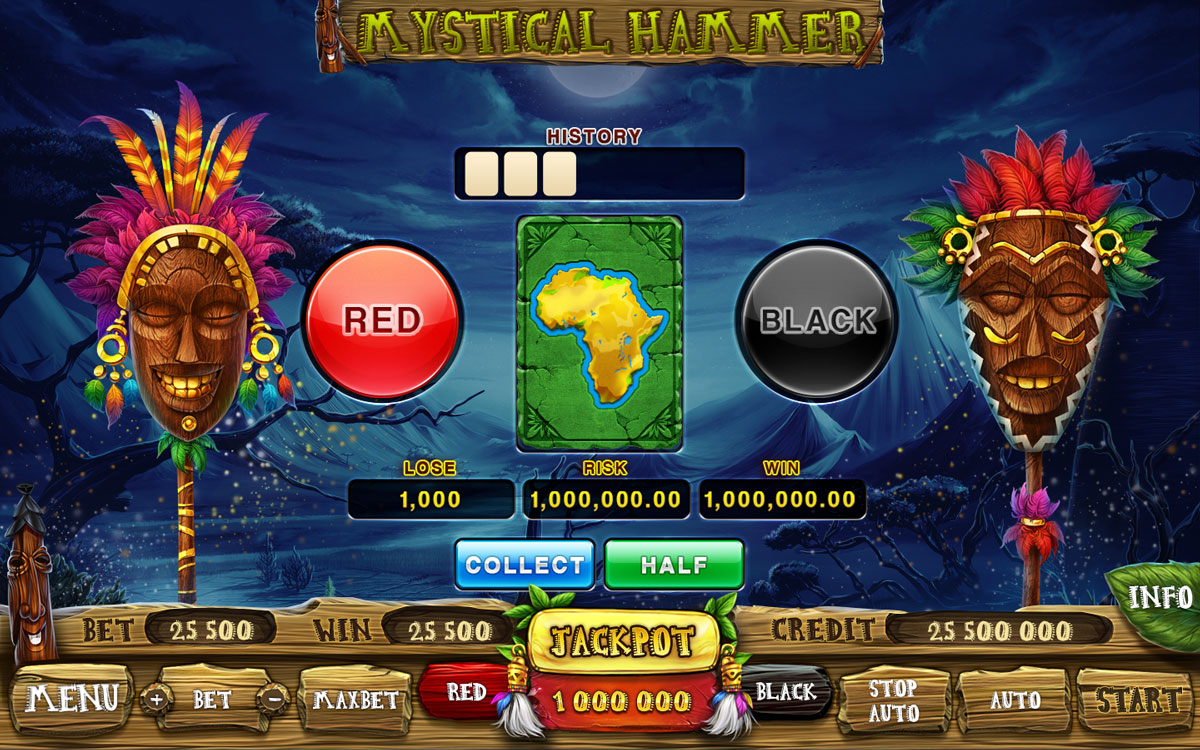 The background for the Paytable design is the already familiar landscape. In the center of the screen is the main character, and around him there are symbols and their win amount. 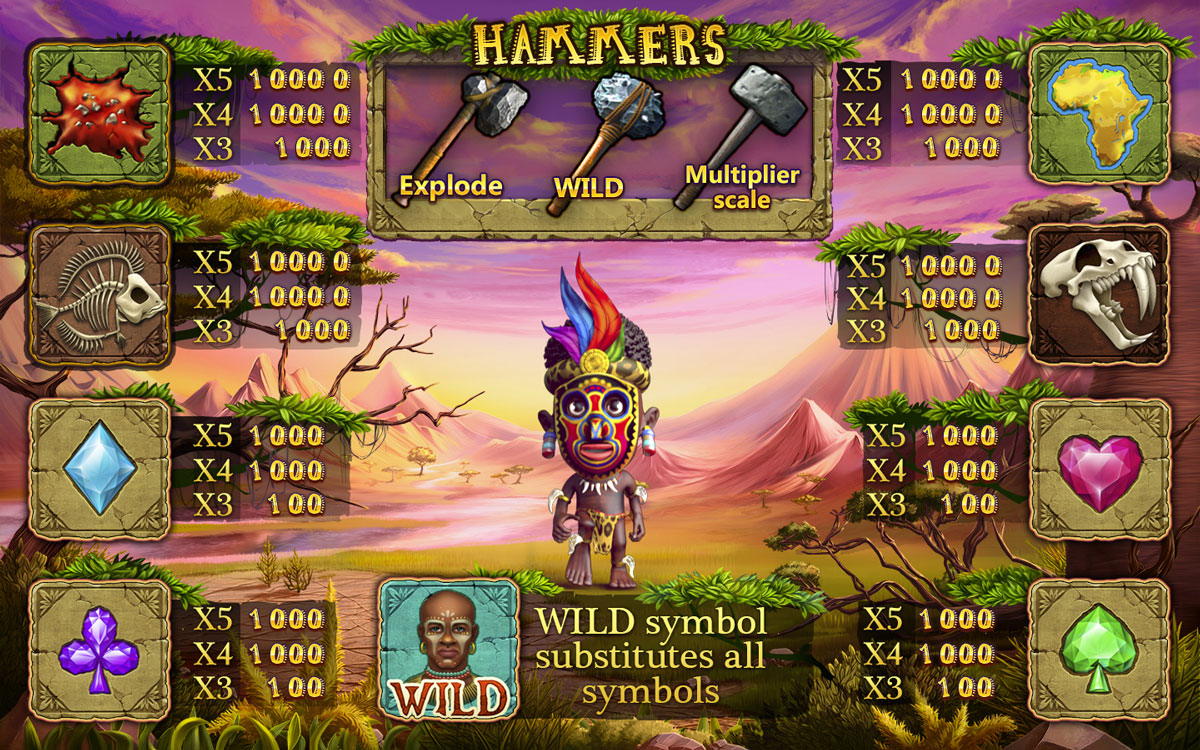 The animated screen in the case of a Big win looks like an explosion in a mine with gold and gems. Gold coins and diamonds are flying from under a huge stone. The perfect demonstration of wealth!

Screens with messages about Bonus games or Free spins are made in the form of a wooden, primitively processed plate. The Ok button in the form of a gold bar reminds of one of the treasures of the African continent. 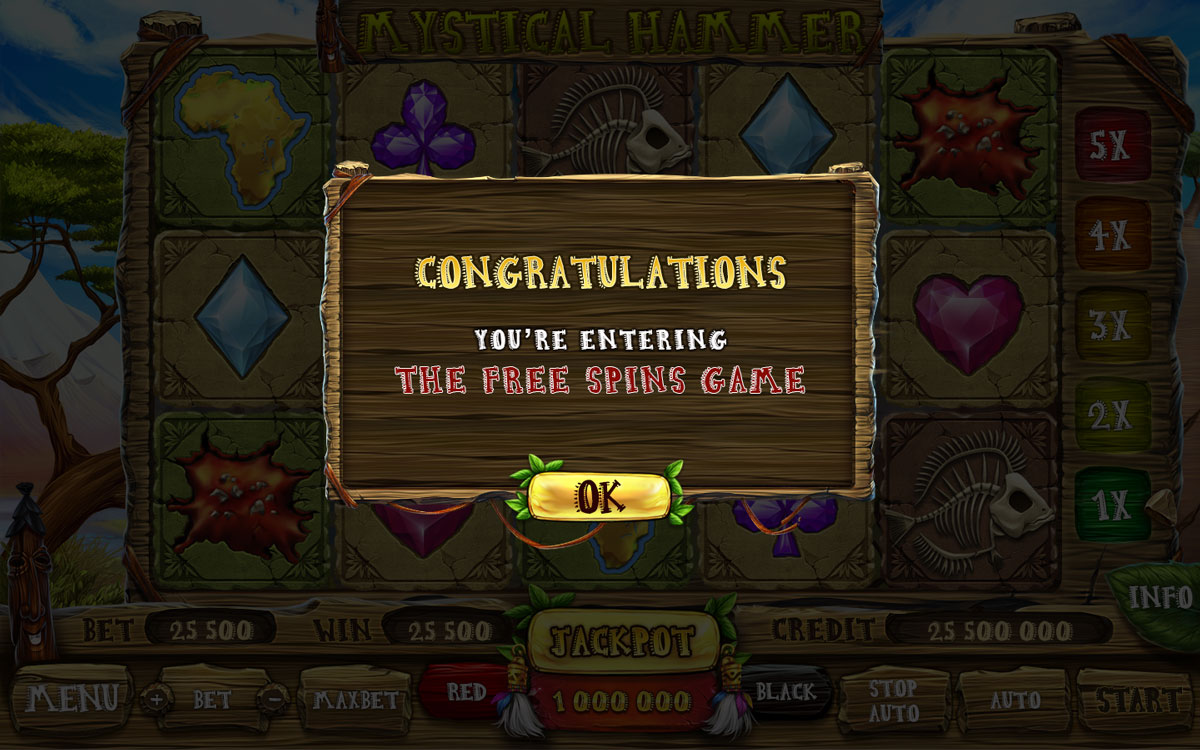 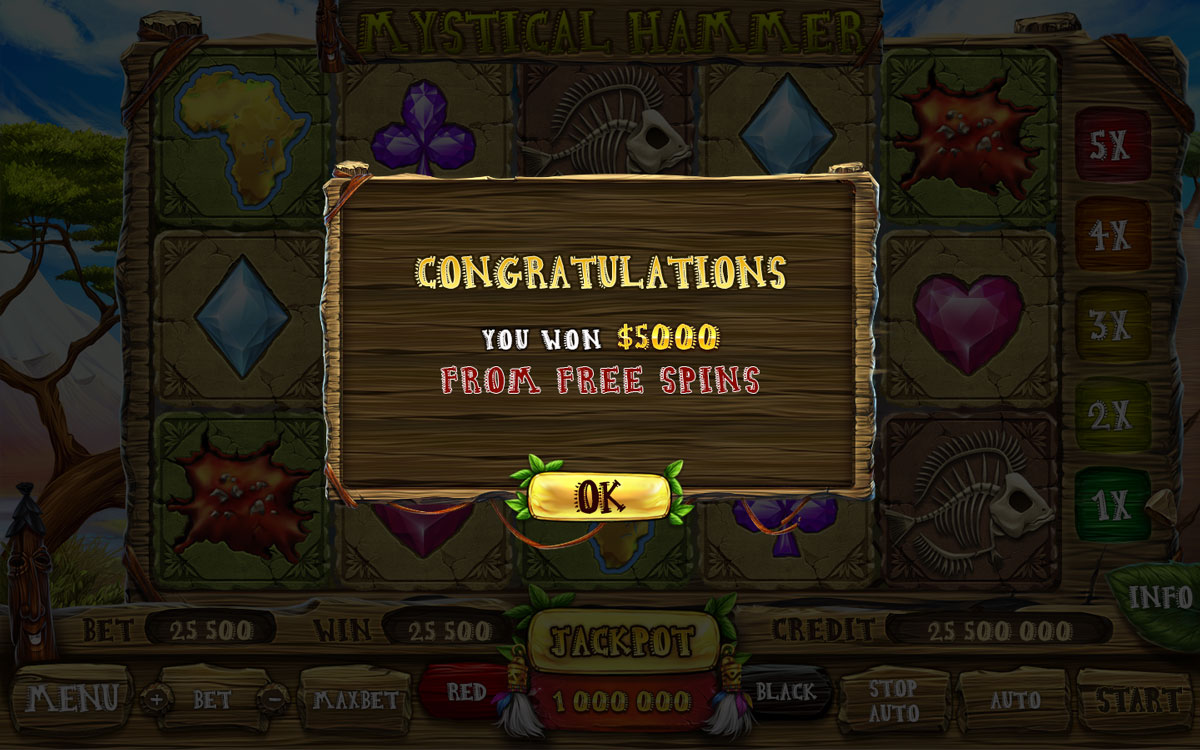 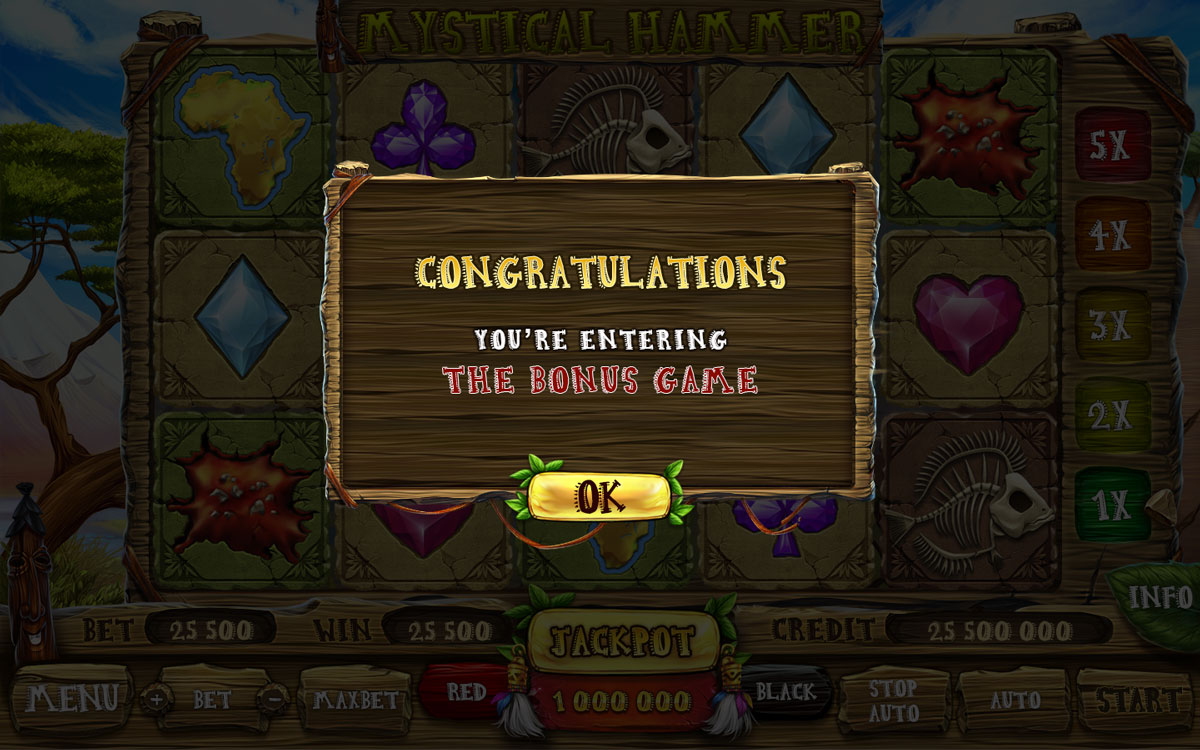 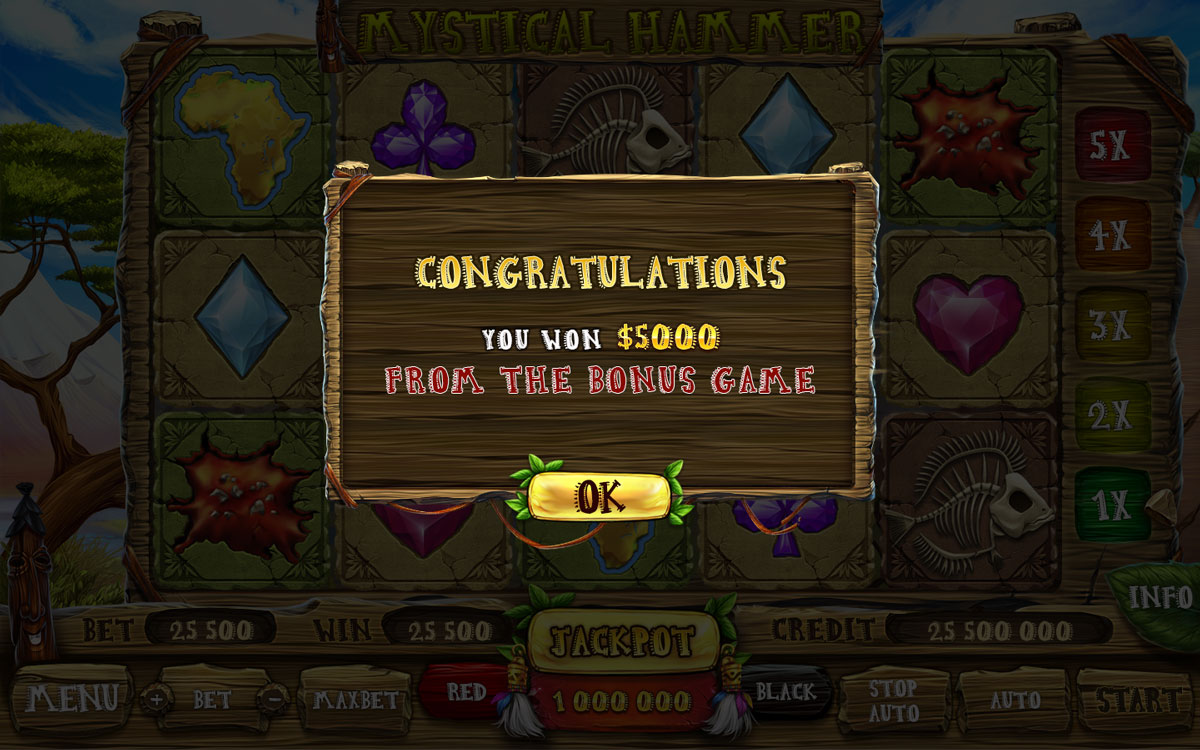 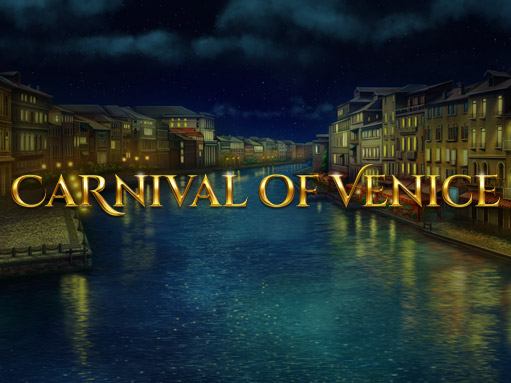 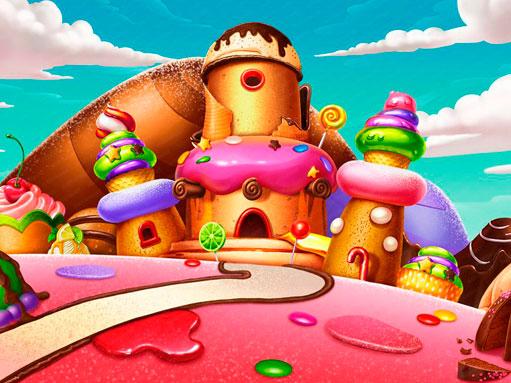 Slot machine for SALE – “The Cave of the Fallen”