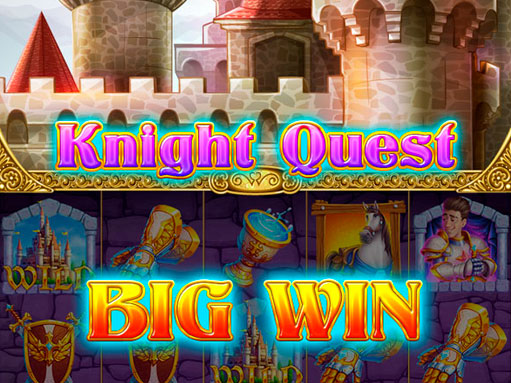 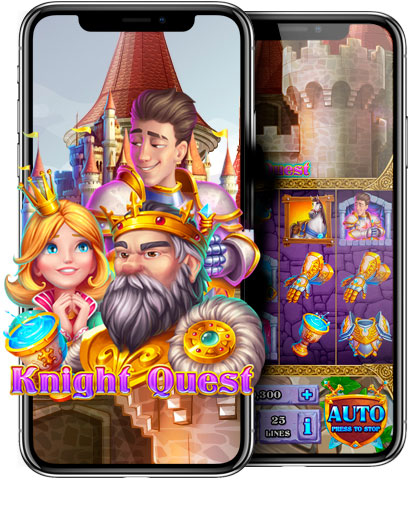 The slot machine offers an interesting set of symbols that reveal the theme of chivalry. The slot machine field is represented by 5 reels, which, are located in the castle dungeon. Above the playing field you can see tall brick towers are majestically located, directed to the heavens, which only emphasizes the atmosphere of ancient legends and romantic stories – a mixture of reality and fiction. On the control panel, under the reels, it is possible to control the state of the game: starting the spinning of the reels, setting the amount of the bet and lines, the total balance of the player. The amount of winnings, if the prize symbols are successfully dropped, will appear in the upper half of the screen, engraved in gold on stones, which is even more mesmerizing with its grandeur and a successful combination of elements of various architectural solutions. If you are interested in this product, you can purchase it at our store – https://slotopaint.com/product/knight-quest/. 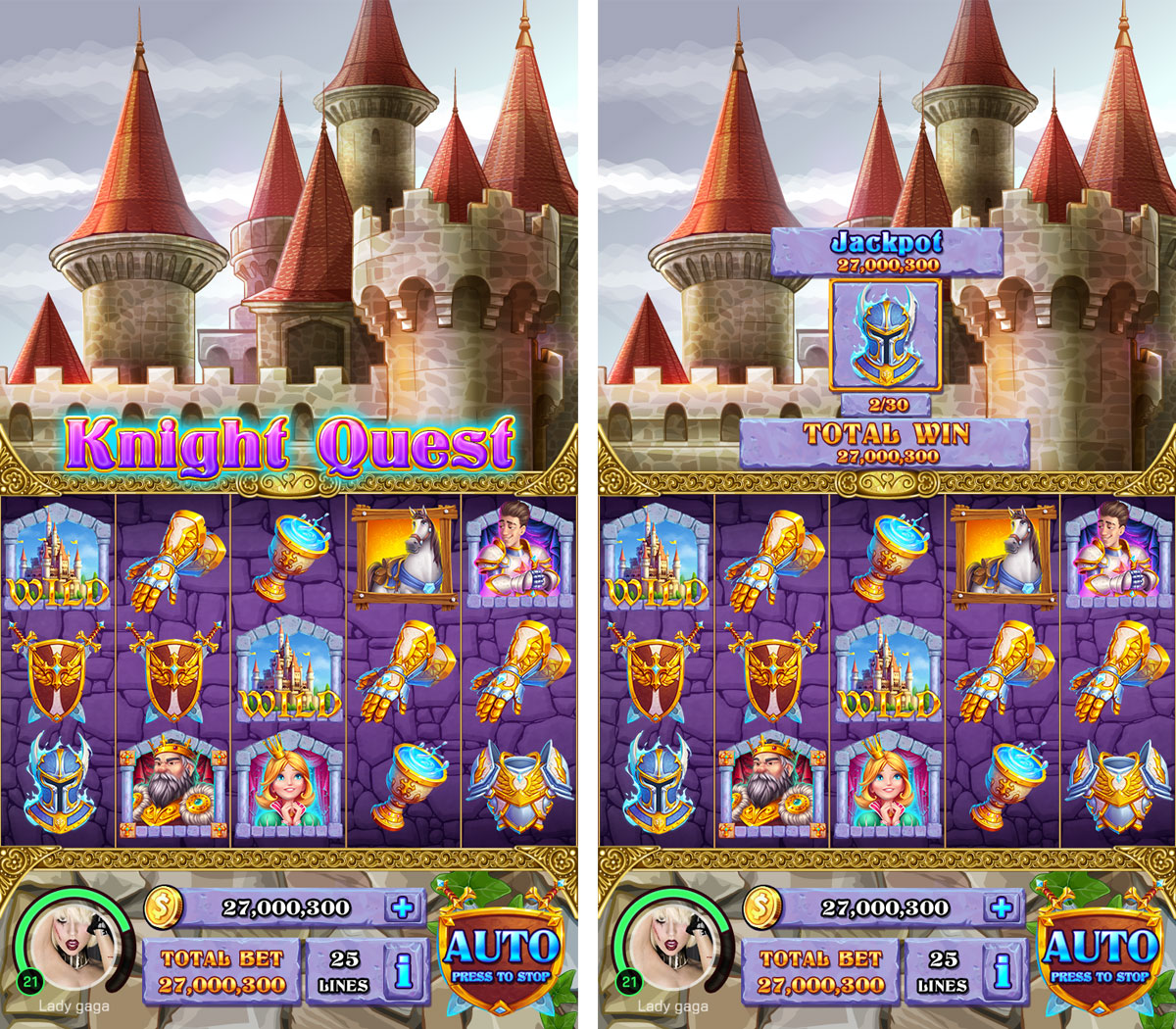 The main background is a castle, which almost perfectly corresponds to the idea of how a real knight’s fortress should look like. Such a typical palace is a stern and at the same time romantic stone mass. Majesties add to the silhouette of the castle high brick towers. They are the embodiment of ancient legends, stories and mysticism, that they just in a second transfer the player to the past, and the player is already plunging headlong into medieval battles. 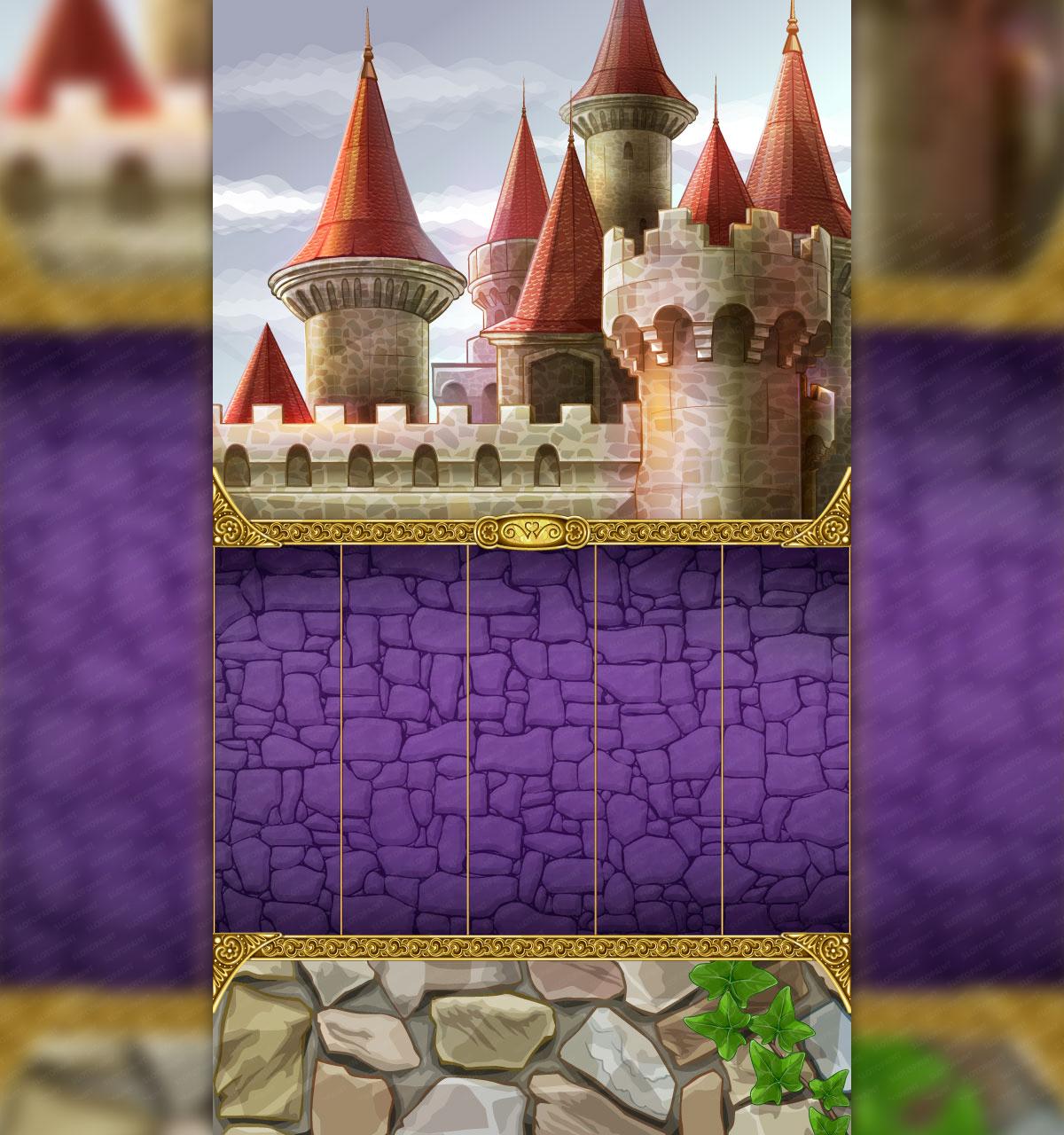 A fabulously beautiful castle, with fluttering flags and majestically towering towers, acts as “Wild” symbol, which will help in drawing up prize combinations. Something mystical, mysterious is present in any castle. Almost each could be or can become the scene of a fairy tale, an ancient legend or a romantic story about love, treachery, the victory of good over evil. One of the main elements is also the image of the king – stern, domineering and unshakable.

A knight must be present in the symbols – in shining armor, confident in himself and his strength. What fairy tale can do without a princess? So our charming, gentle fairytale beauty is hiding in the castle window. 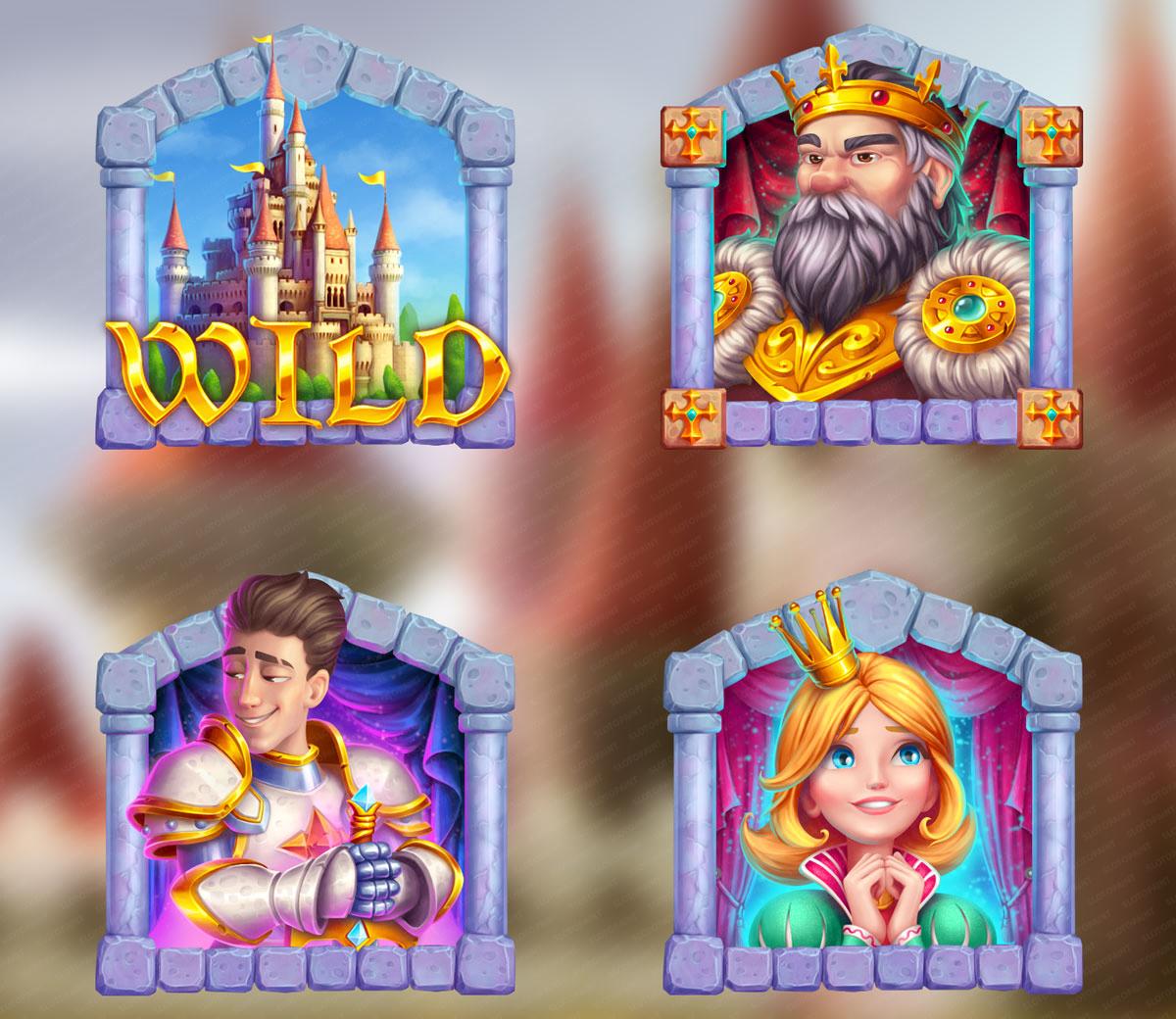 The area of weapons and armor is surrounded by romantic legends. Any warrior needs armor. Let’s try to get them. A powerful chestpiece that protects against any arrows. Golden gloves that will help you win any victory; unprecedented helmet; and the shield reliably protects against enemy attacks. Stamina recovers more slowly due to heavy armor, but with a glass of water, you can restore not only strength, but also wealth. And most importantly, it is difficult to imagine a knight without his faithful horse. 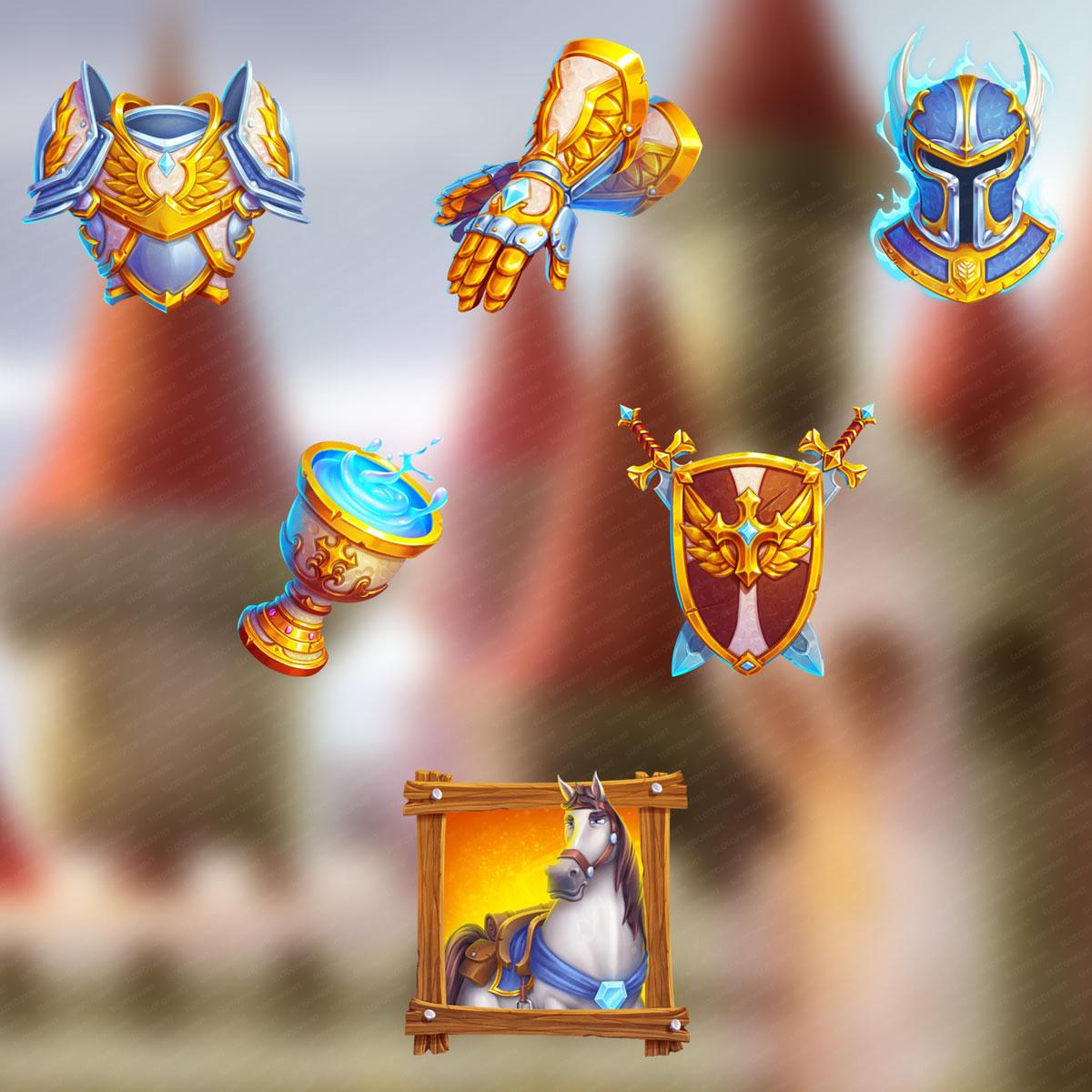 The main task of the quest is to collect all the requisites of the warrior’s equipment on the “battlefield”: a helmet glowing with blue fire; decorated with gold, warlike armor; valor-encrusted gloves. Here future warriors will be able to test their valor. Today we have a “Knight’s Tournament” and the most famous and noble gentlemen from noble families have come for it, they all want to try their hand, show their agility, ingenuity and their knowledge. You, the best knights, have been selected to undergo a secret and deadly rite of passage, during which your body and spirit will be tested for strength. At the same time, 5 kings can simultaneously gather in the castle, which will bring not only the glory and the hand of the princess, but also the jackpot. 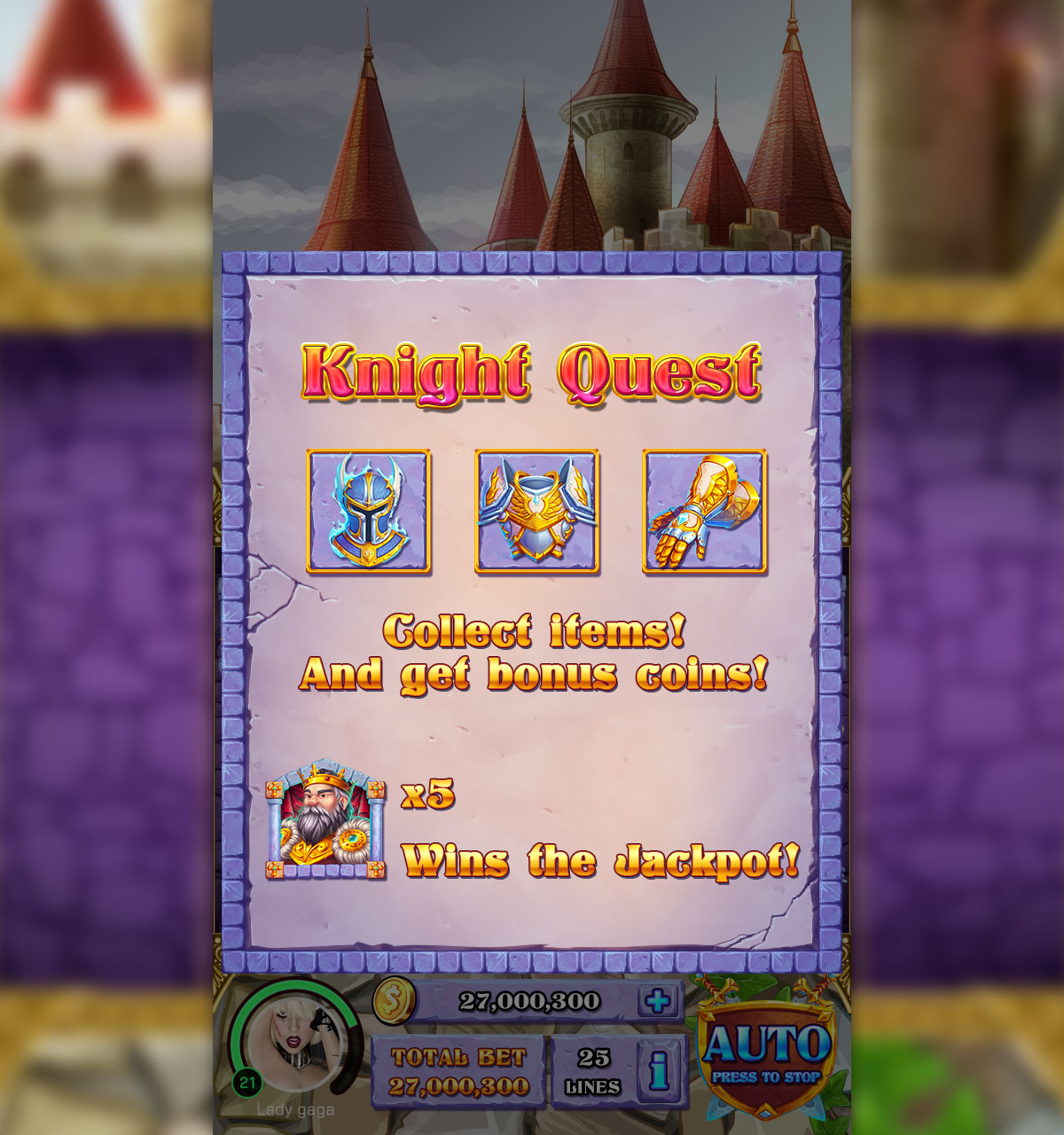 The combination of knightly props will lead the player to the final winning situation. Stone slabs, with notification of the current state and the amount of the tournament match, can take us hundreds of years ago. Thanks to this, you are immersed in the world of the game and do not notice how the reels are scrolling over and over again. 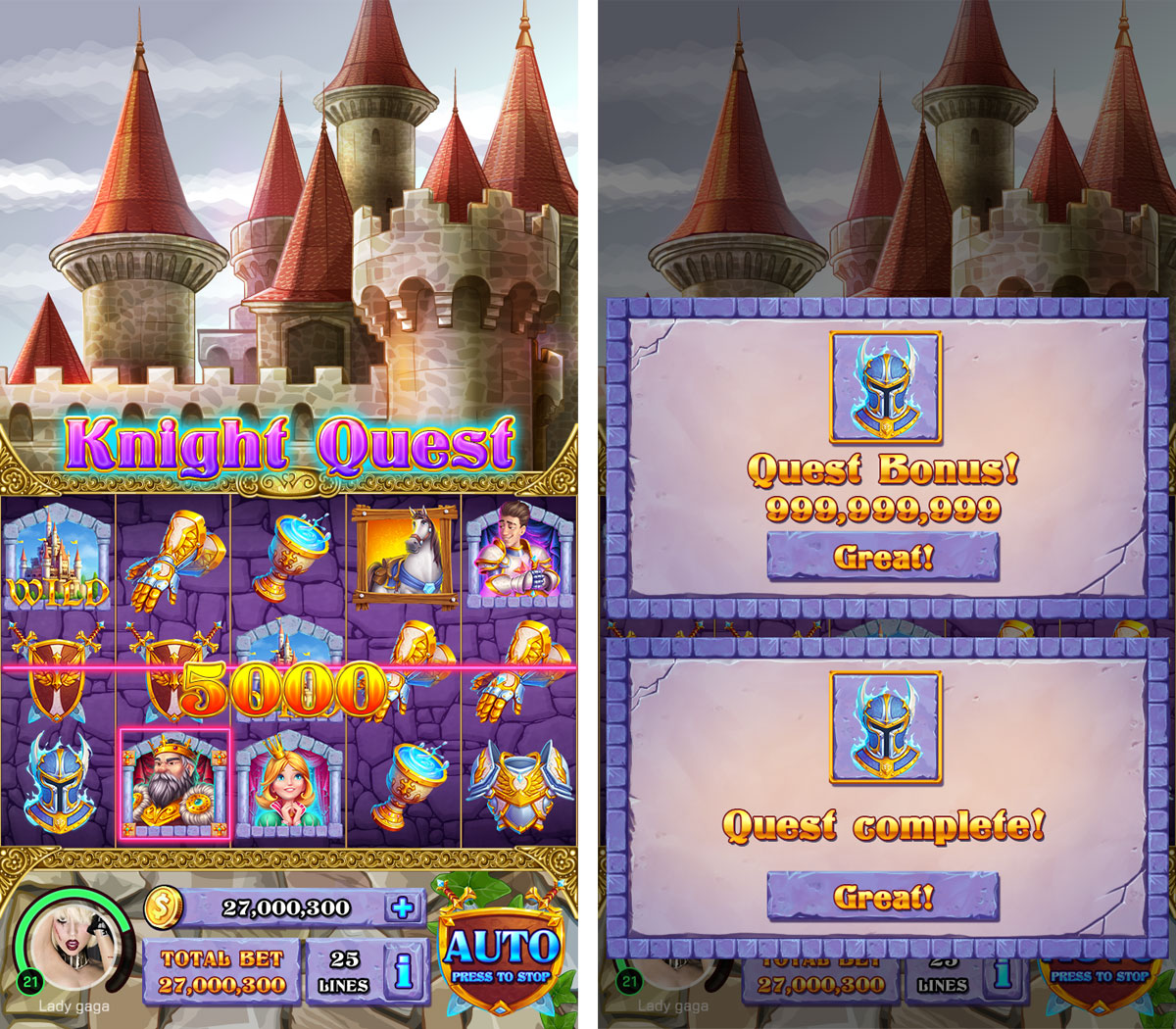 The types and amounts of winning are carved out of fire. Like only a knight’s forged sword, they are painted in fiery colors. As far as the power of the fire can change the color of the flame, the amount of payments changes with the same hot temperature. The higher the win, the hotter and brighter the message on the screen and in the heart! This hot flame can no longer be extinguished. It bewitches, attracts and calls! One has only to see him once… 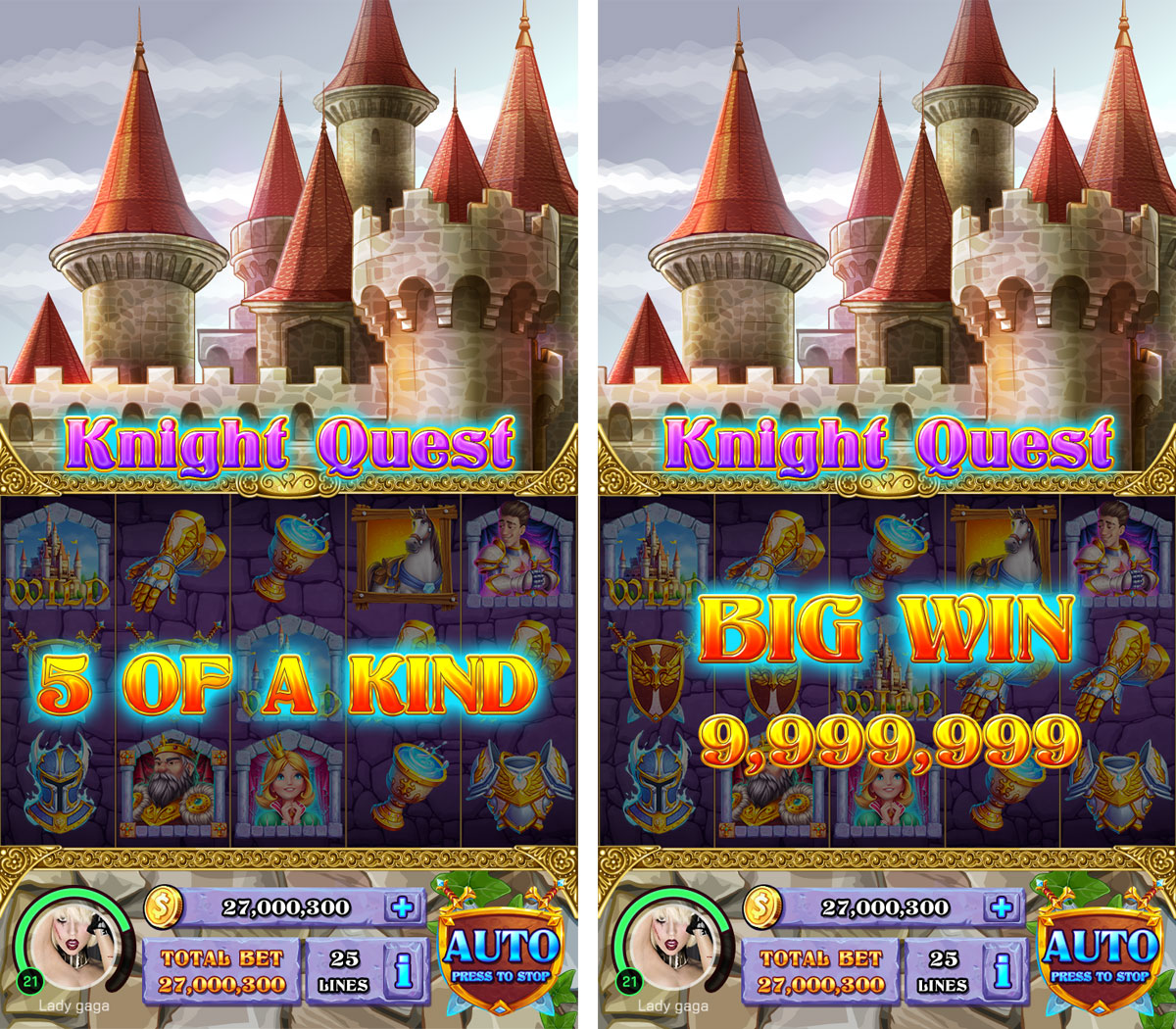 Having reached the climax of the jackpot game, the slot surrenders and showered the player with gold coins that are poured from heaven. But do not forget about the composure and prudence inherent in every warrior. It is worth to smile and further rush into battle, because the knights do not stop! 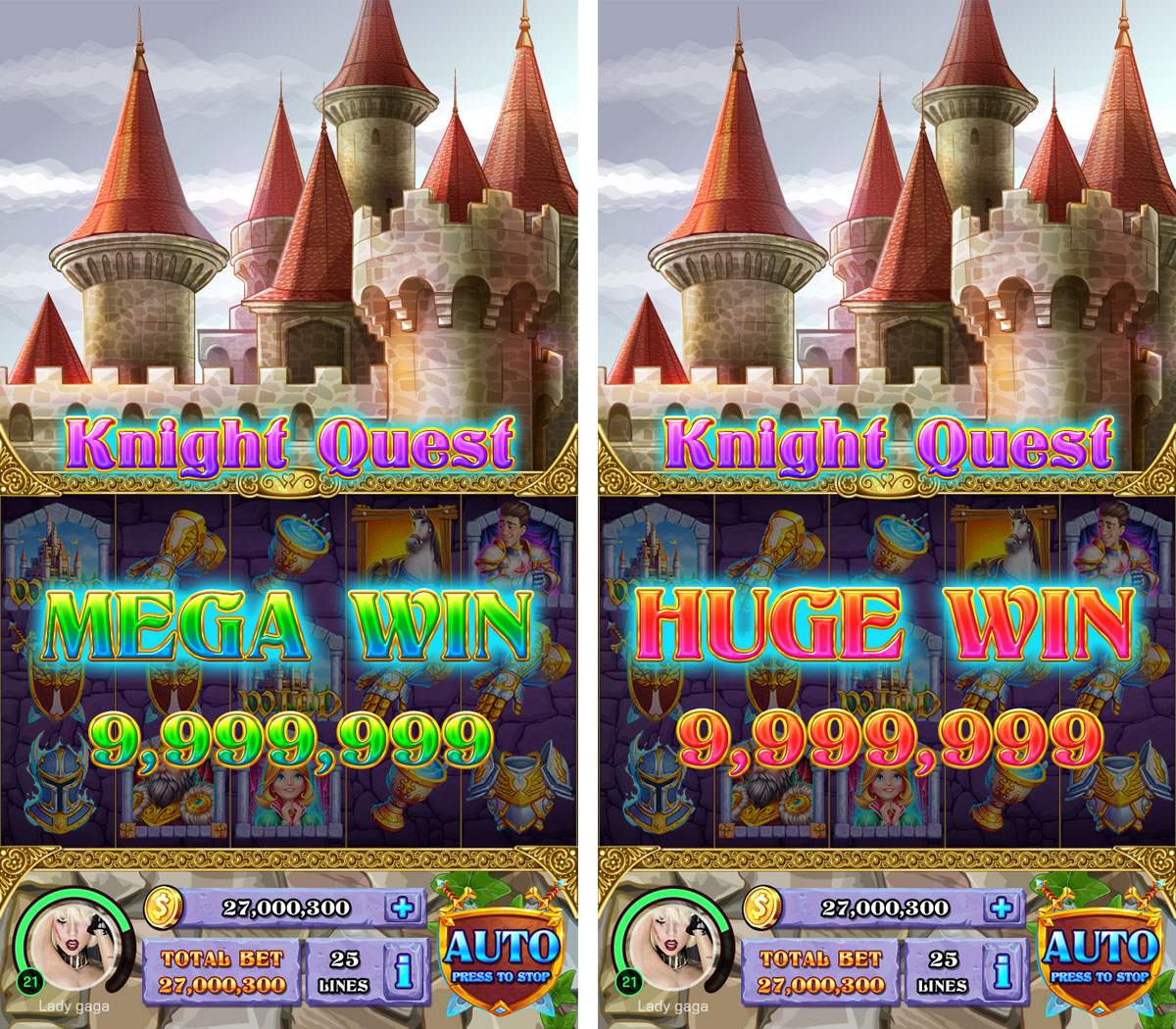 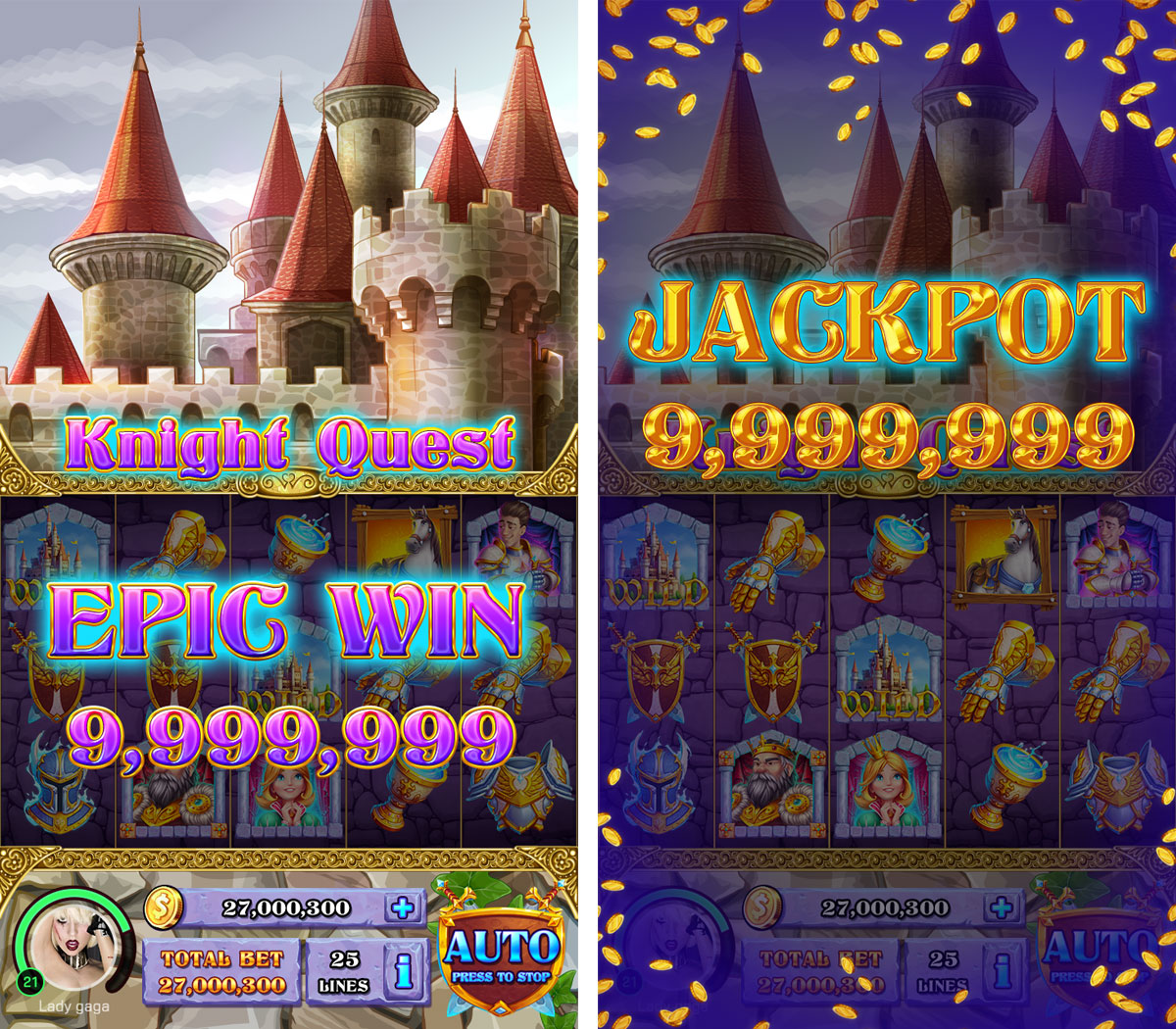 Detailed information can be found in the “Pay table” section, where you can see possible winnings and combinations. For convenience, it is split into three pages by relevance. In the first place are high-paying symbols with corresponding coefficients, respectively, the rest of the icons are located in proportion to their decreasing size of payments. From this beautiful chronicle, players will learn how to go through the training of a future knight and how to properly besiege and defend the castle. 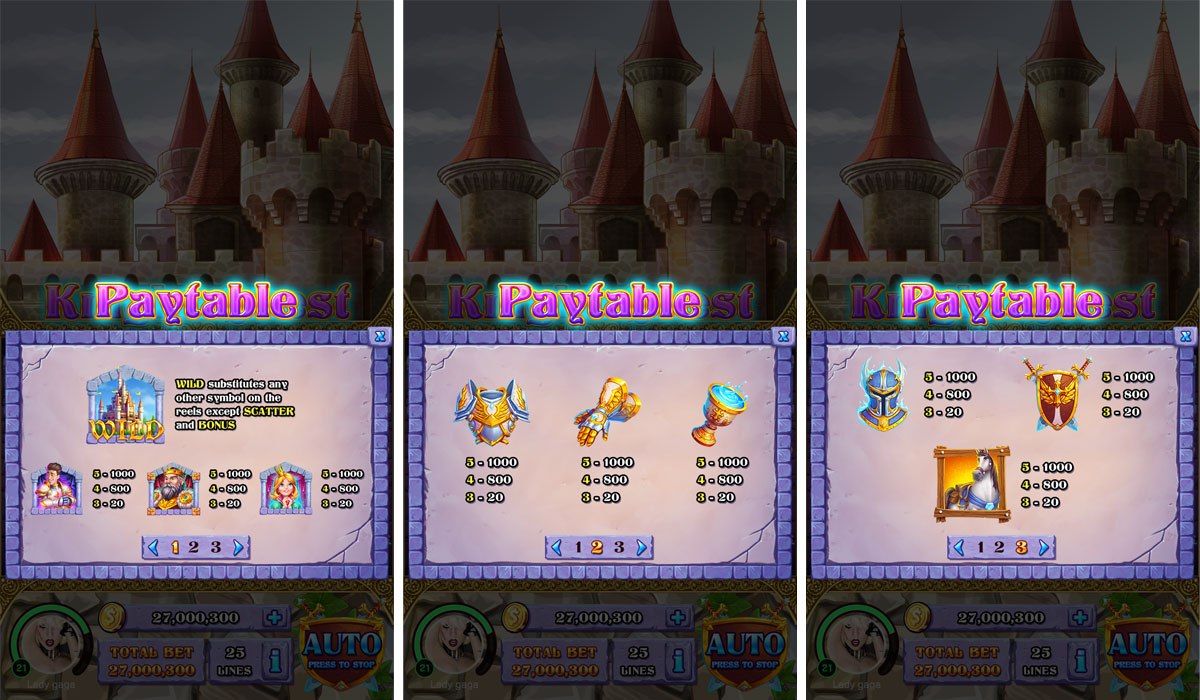 What could be better than going into battle without spending a single gold. But thanks to “Free spins”, our quest will be able to give the knight all the necessary attributes to conquer his goals and conquer the heart of a beautiful princess, one has only to win the necessary elements. In any tournament there are losses and wins … It is worth applying the maximum amount of perseverance and strength so that a huge amount of gold coins showered your monitor screen. But the knights are, first of all, a story of bravery and nobility. Pure stories of brave and benevolent warriors! 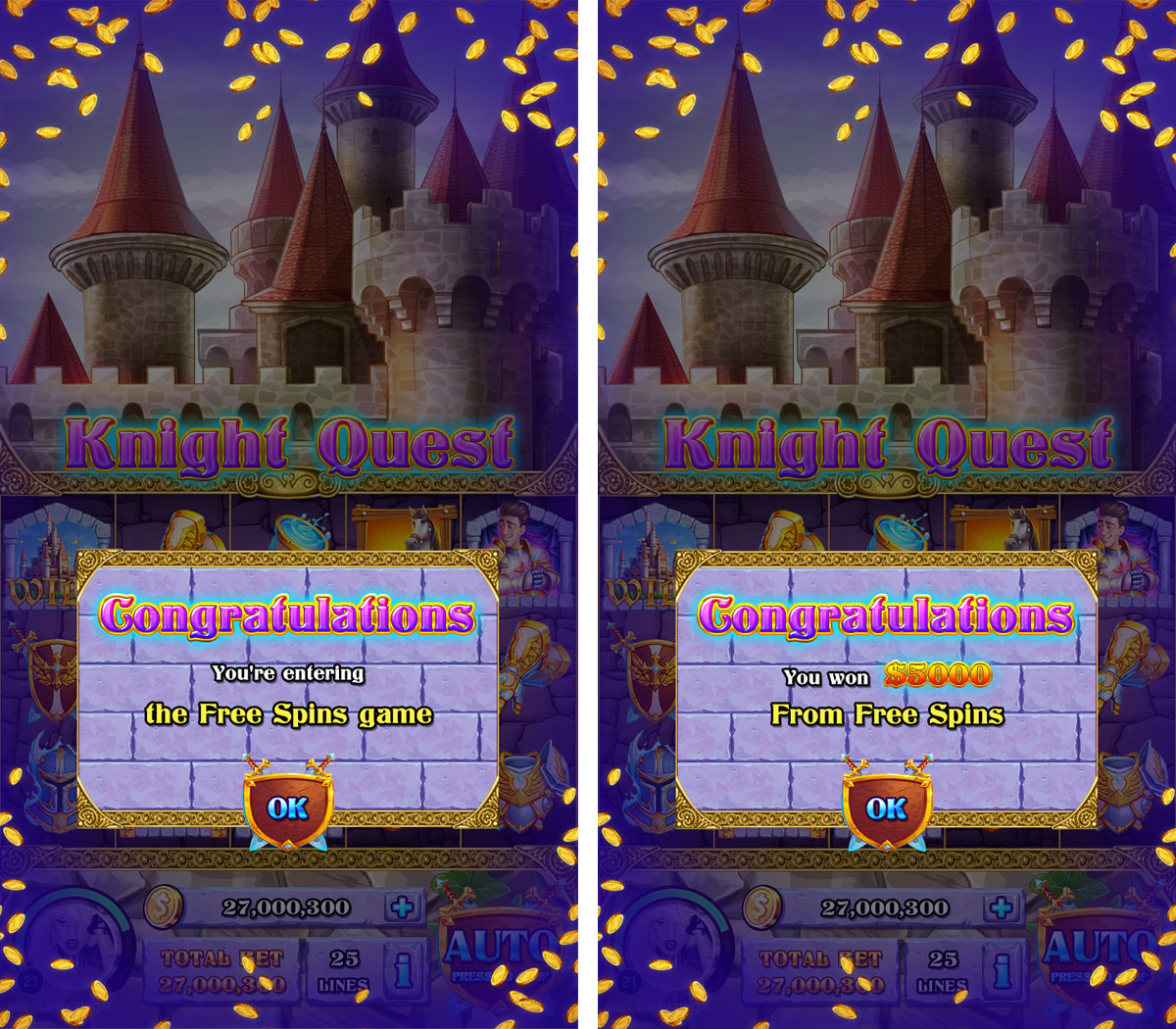 The bonus mode will help you get close to making your dreams come true. Knights constantly find themselves in some kind of stories and adventures – sometimes funny, sometimes dangerous. Everyone believes that the days of the knights are long gone, that virtues and nobility have sunk into oblivion. The value of a knight is his dignity and honor. It’s worth the risk to prove your worth! 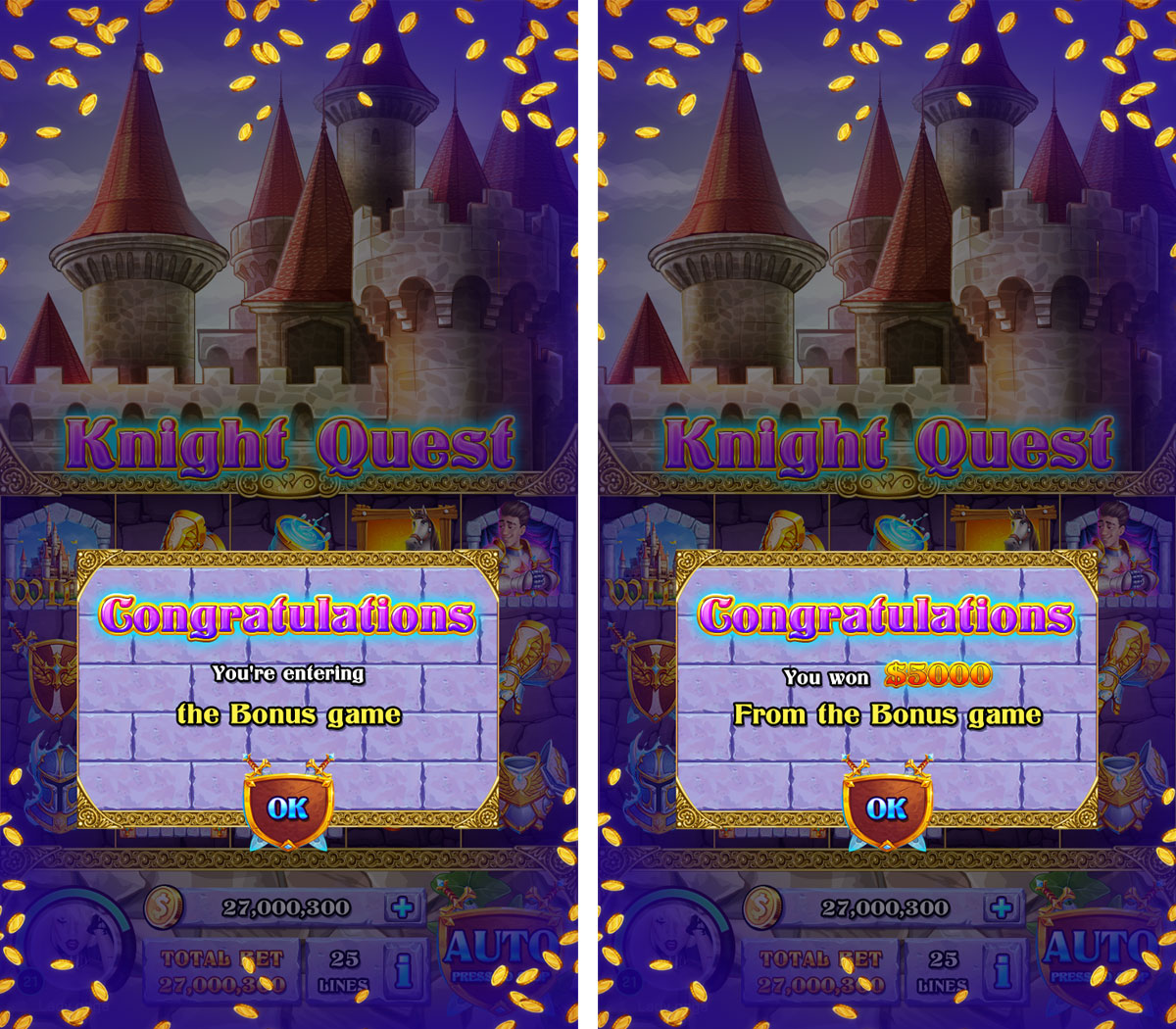 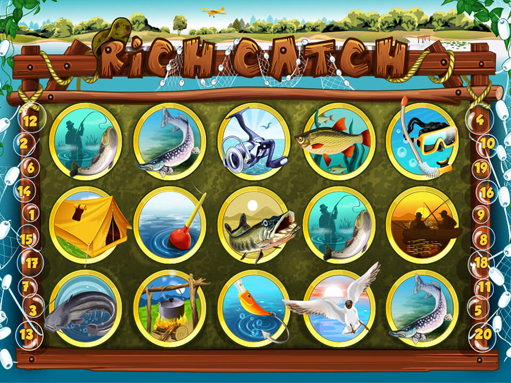 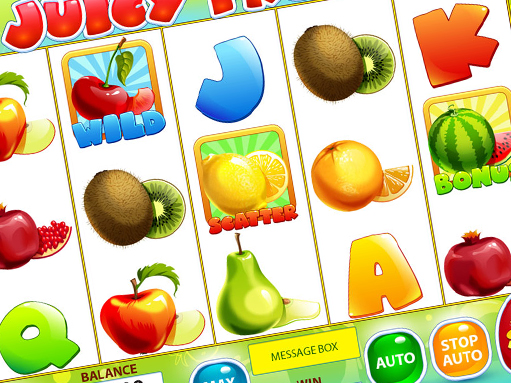