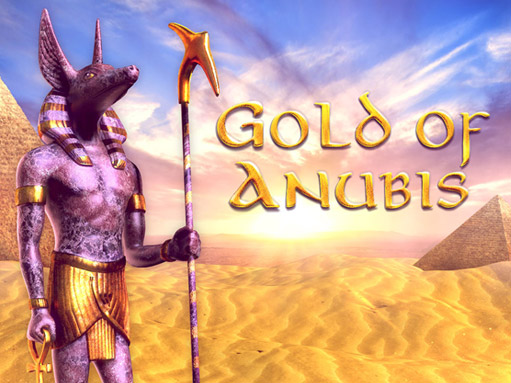 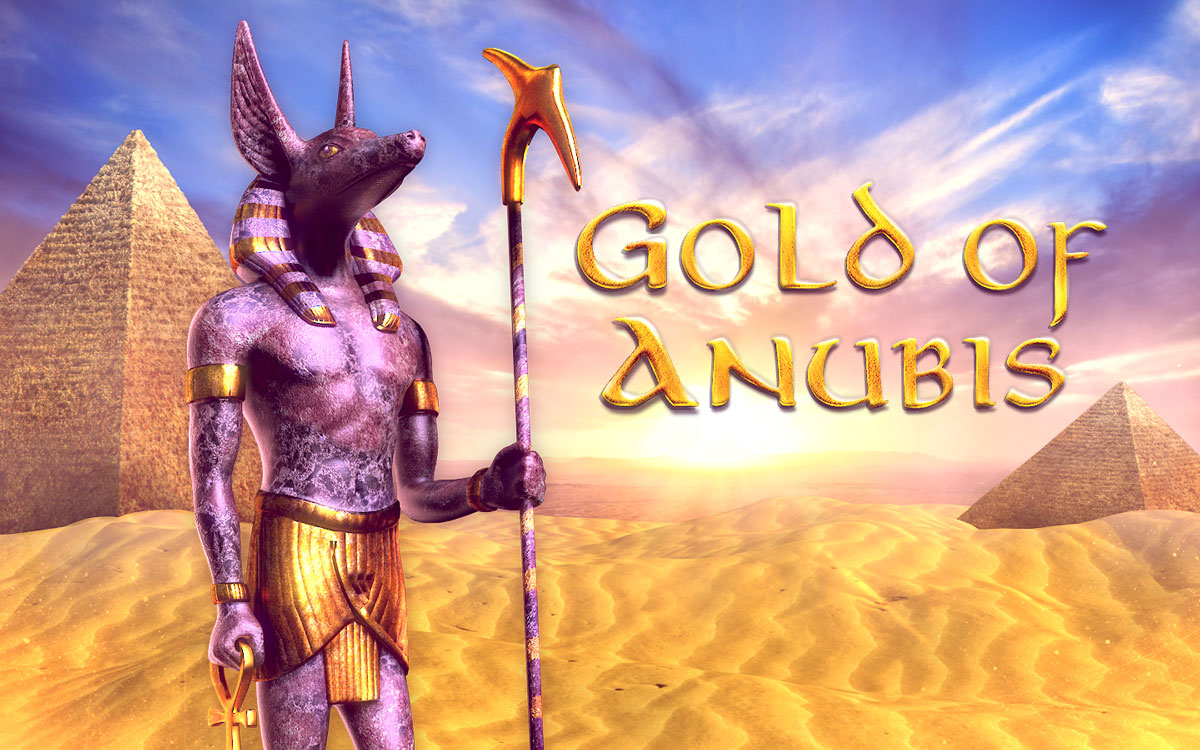 What do we know about Egypt when we talk about it? The first thing that comes to mind is the well-known wonders of the world – the Egyptian pyramids and the Sphinx. What do we know about history? For some, Egypt begins with the history of the relationship between Julius Caesar and Cleopatra, someone has heard a lot about the beautiful Nefertiti, and someone is very knowledgeable about ancient Egypt. For example, God Anubis, mentioned in the title of our slot Gold of Anubis. This is the ancient Egyptian God of funeral rituals and mummification, “the guardian of the scales” at the trial of Osiris in the kingdom of the dead, an expert on medicinal herbs. It is he who accompanies the dead to the afterlife and determines their posthumous fate, weighing their hearts during the trial. If you are interested in this product, you can purchase it at our store – https://slotopaint.com/product/gold-of-anubis/.

The first image (above) that we see on the screen at the very beginning of the loading is the splash screen. In front of us is the god Anubis with a scepter, he is drawn in a golden-purple color, near which we can see the name of the slot  – “Gold of Anubis” It is in beautiful bright gold letters. On the background, on the left and right, you can see the Egyptian pyramids among the sands of the Egyptian desert, and even further beyond the horizon, there is a brightly shining sun, whose rays diverge over the endless cloudy blue sky and over the golden desert.

The game reel is visually divided into five vertical columns of three symbols each. The symbols shown on the reels are of the highest, main and lowest categories. The name of the slot is placed at the top of the reels, and made in beautiful gold volumetric letters. The background is brick, with an abundance of symbols on them. Two Egyptian statues are on the sides. At the bottom of the reel there is a control panel, in rectangular colored frames: balance, messages, winnings; green and red buttons for auto and stop auto, there are also buttons for bets, clear and maximum bet. At the bottom right of the control panel there is a visually bulging blue large SPIN button with a dotted border around it, in blue-orange colors. The SPIN lettering is made in three-dimensional gold letters: 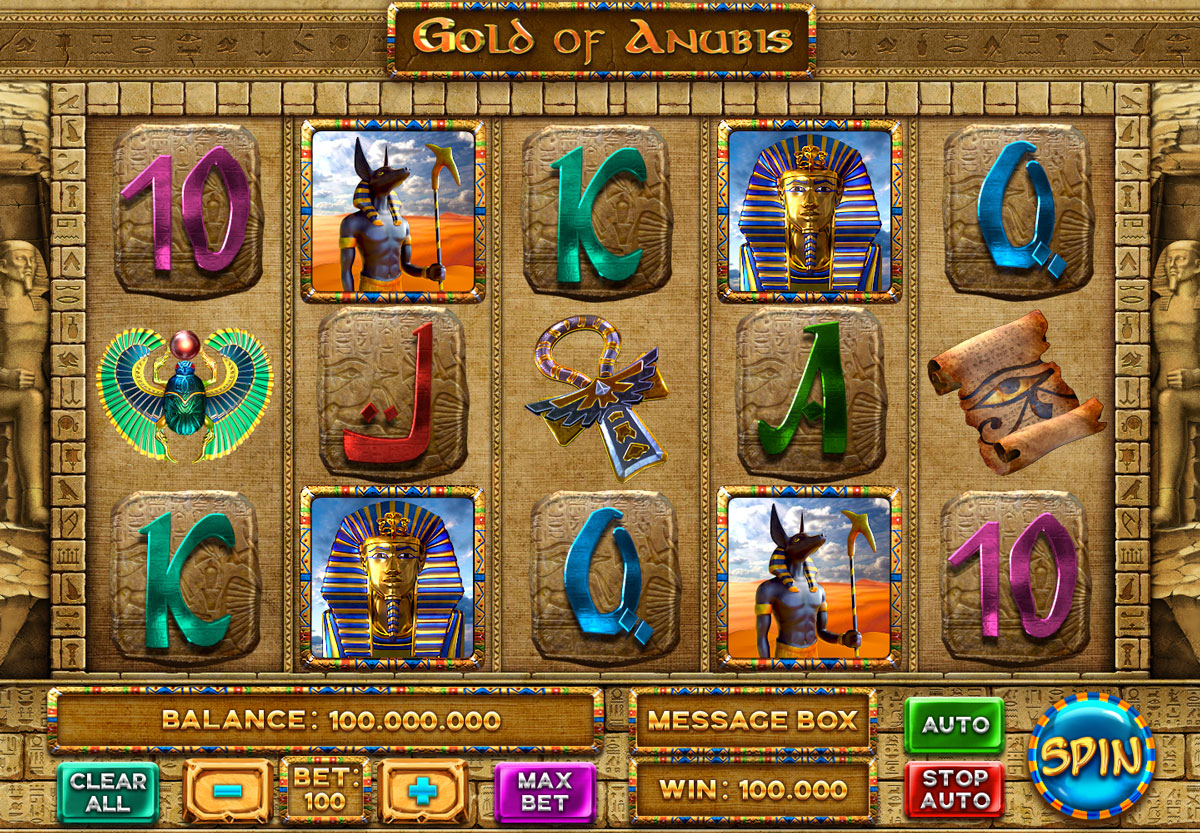 This is the background of the Gold of Anubis slot game. It is presented in the form of a brick wall. The bricks are old, yellow-gray-green in color, with an abundance of chips and irregularities around the perimeter, which indicates a pronounced shade of time on them. Each brick has many different symbols and designations, which is typical for the time of the past eras. 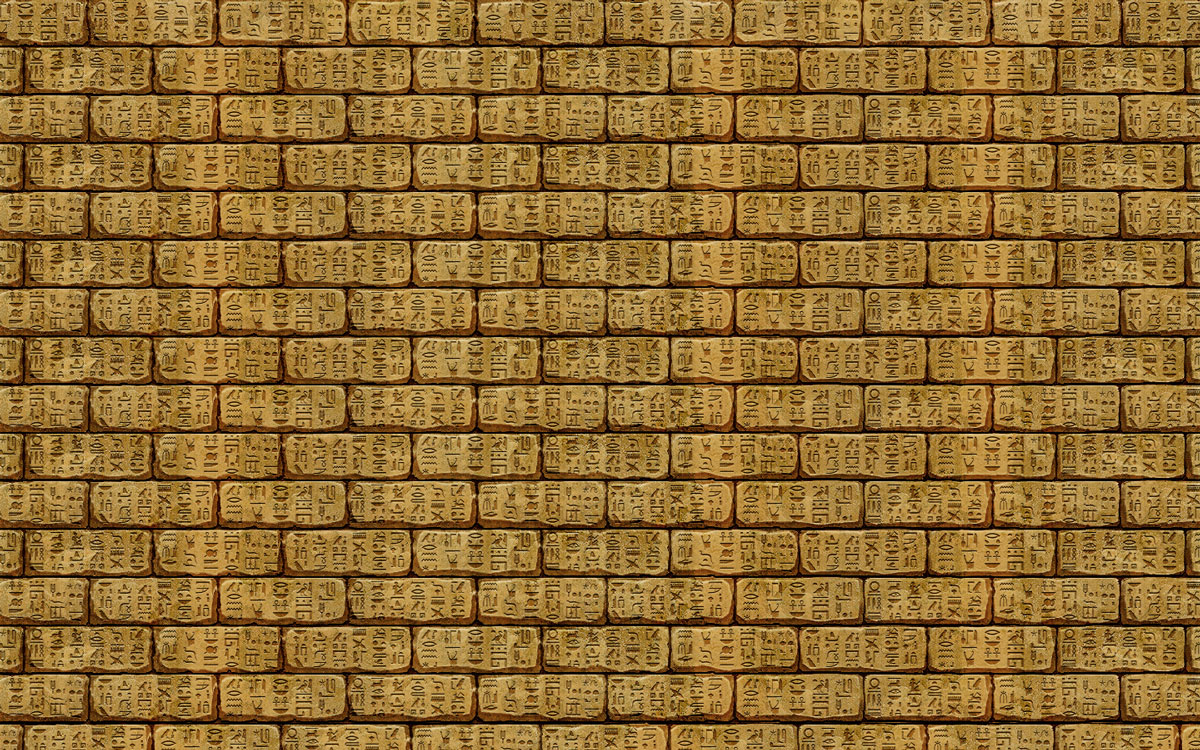 The next screen is the symbols of our slot. They are presented in three horizontal rows of two, three and five symbols, respectively. The upper row – two symbols of the highest category, where in colored square frames with his own unique background – the god Anubis against the sky and the desert in blue and yellow colors, and next to the Egyptian Sphinx in blue and gold colors, made of metal against the blue sky. The second row is the symbols of the main category. Here are two elements of the symbols – the scarab beetle and the Ankh cross, made of gold and precious stones of blue-yellow-green colors with a shade of purple and pink. There is also an ancient papyrus with uneven edges, with a large ornament applied to the eye of Horus in a yellow-black color. The third row is alphanumeric symbols related to the Arabic alphabet. Each of them is presented on a kind of stone plate with a certain embossing on them. The letters and the number 10 are bright, colored, shiny and somewhat voluminous with a symbolic imprint on them. 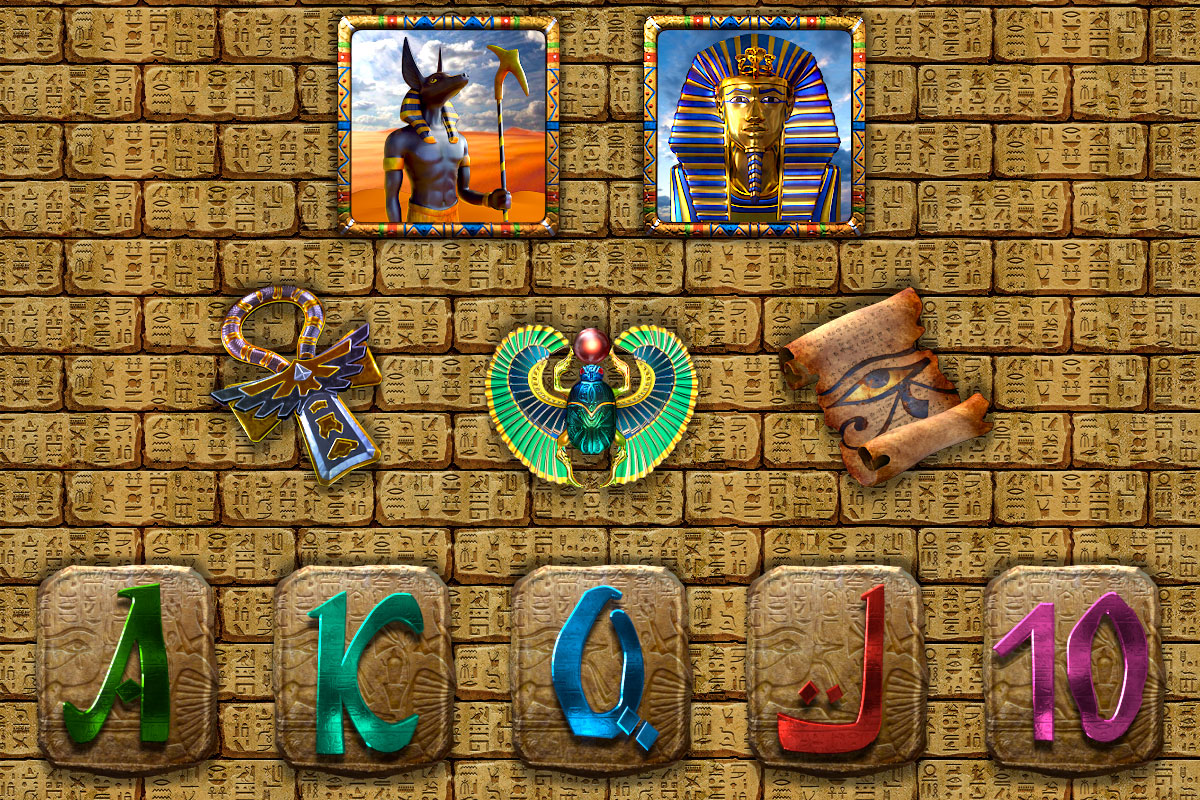 Below is the animation of symbols of all categories. Each symbol has a specific movement. Symbols of the highest category. For the animation of the first symbol, both the main element and its background are involved, where the Egyptian pyramids appear in motion. Second – the Sphinx dynamically rotates around its axis, illuminated with gold and approaching as much as possible in motion. The next row – symbols of the middle category, the first two symbols – a beetle and a cross – spin diagonally and vertically, significantly illuminated by gold, and the scarab flaps its wings and a fire-red ball rotates at the same time. The papyrus also rotates on a roll rhythmically, opening up periodically.

Here is a game field with a different green-brown plank background with chains and whips on the sides, made of metal from gold. In the middle is a papyrus with a touch of time on it and an abundance of abrasions, roughness and torn tanks. At the top we see the inscription History in small letters and under it a rectangular cell with a light gray place for the cards. In the center is a colored playing card with the image of a scarab. On the sides of it are two large buttons Red and Black. Below are three cells with a digital value and an inscription above them – Lose, Risk, Win. Below are two buttons of blue and green color Collect and Half. This is a Risk game. It offers the player to increase his winnings by guessing the color of the card suit. Only 7 attempts are given. The winnings are doubled with each attempt. At any time, you can take away the winnings in full, or take only a part and continue playing for the rest. Or you can play for all the money to the rest and end up losing, well, or catch your luck and hit a big jackpot. The familiar control panel is placed below the papyrus. 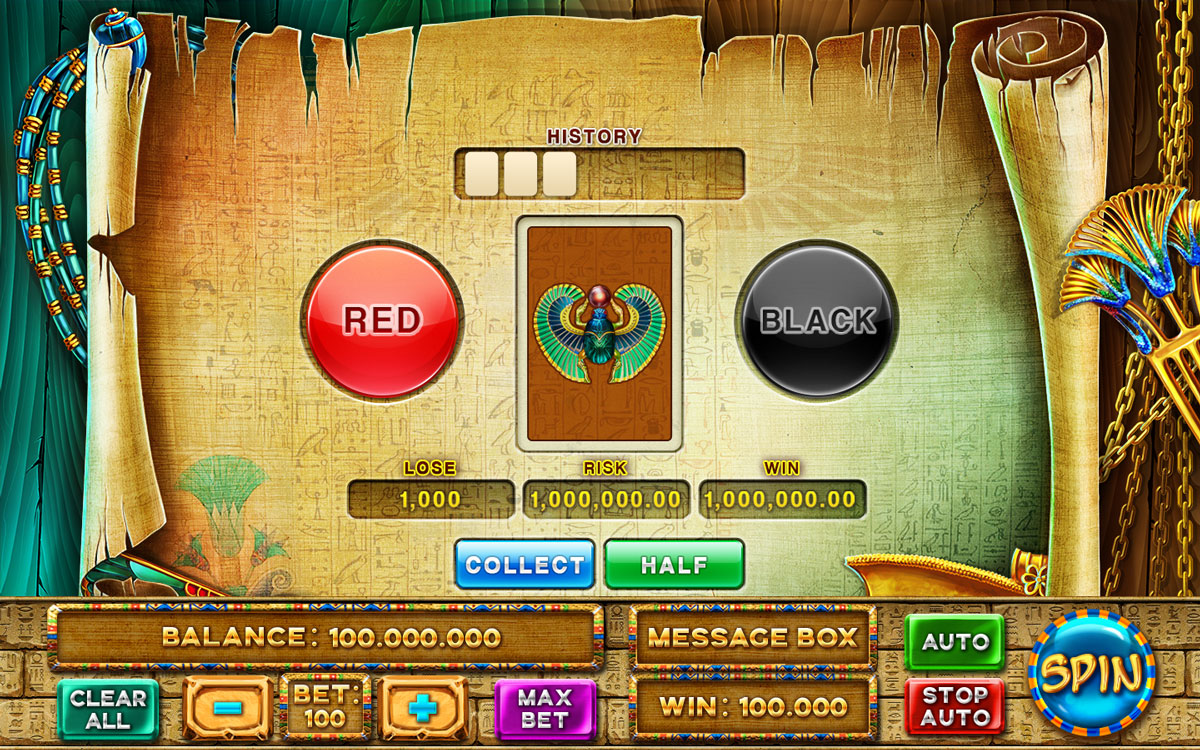 The next screen is the Paytable, with the number of win symbols and the amount of payments for each combination. These are symbols of all categories, which are presented on the background of the stone Sphinx with clear time signs on it, the yellow desert and the blue sky. On the sides of the screen there are stone elements with statues and stones, with signs and symbols applied on them. In the middle of the screen, at the top, there is an inscription in volumetric gold letters “Gold of Anubis”. The screen is visually divided into three columns with numerical values next to each symbol, presented in a rectangular stone somewhat cracked frame. In the center there is a rectangular high frame, divided into two unequal parts, where at the top there is a papyrus with the quantitative and numerical value of the win, and below is an explanation with symbol thumbnails that the bonus line is activated when the symbols below appear. 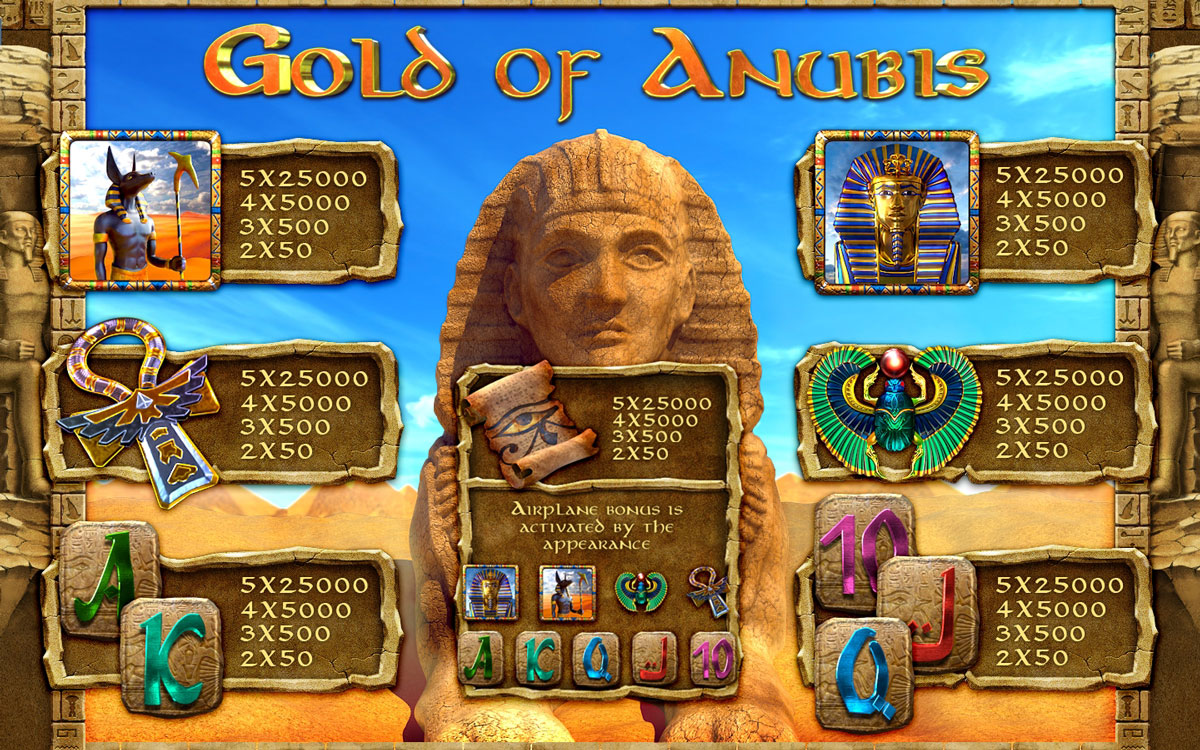 Big Win pop-up. It is presented on the darkened background of our main screen. In the middle there is an inscription BIG WIN in large volumetric letters of gold color. The amount of the winnings in gold numbers is placed below, on a rectangular stone cracked plate. 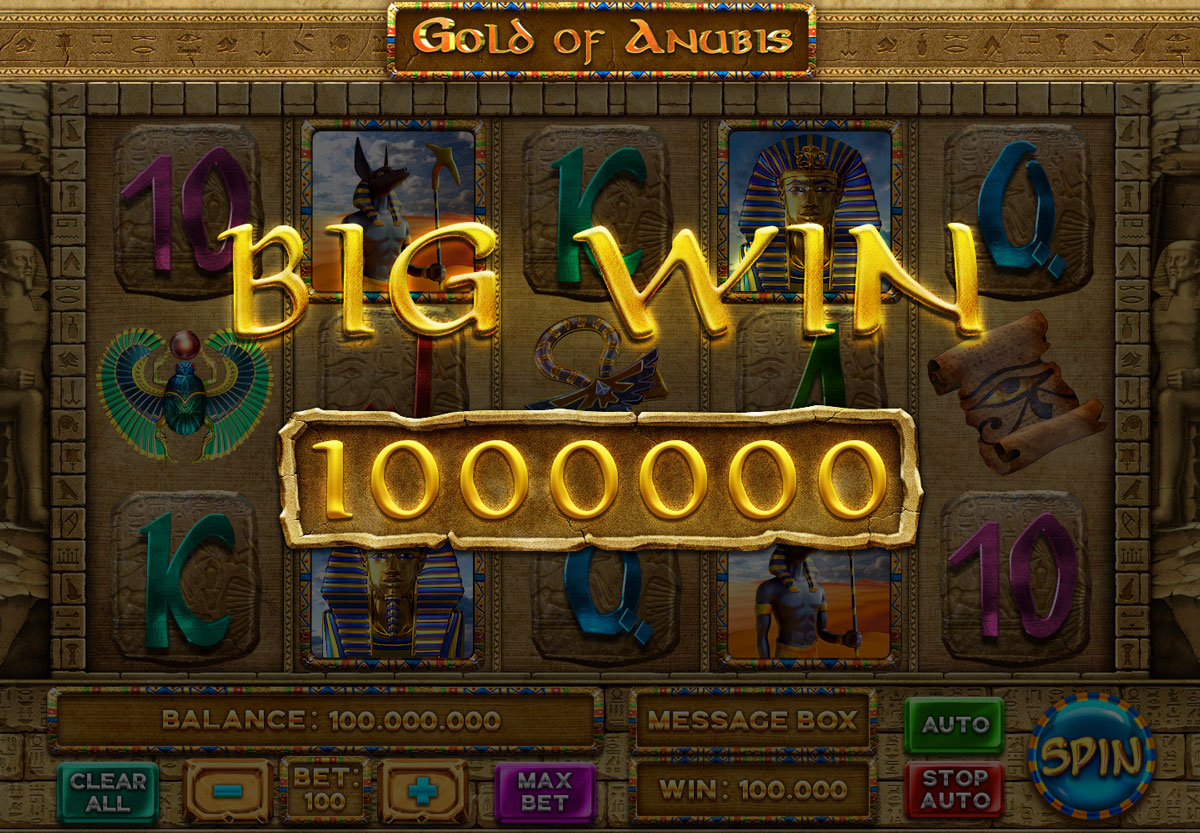 Very bright cool Big Win animation. On the background of the screen of the game reel, a powerful sand vortex appears literally out of nowhere, creating the widest vortex column. Then the inscription Big Win appears in large volumetric gold letters, and the amount of the win. Then the vortex scatters in different directions across the screen.

Our main reel screen with a gold slot inscription at the top. In the middle in large volumetric golden letters and numbers in three rows – “you have got 10 free spins” and even lower – Bonus-symbol, and next to it, in a square stone somewhat cracked cell, the Bonus symbol for these Free spin games will be displayed. 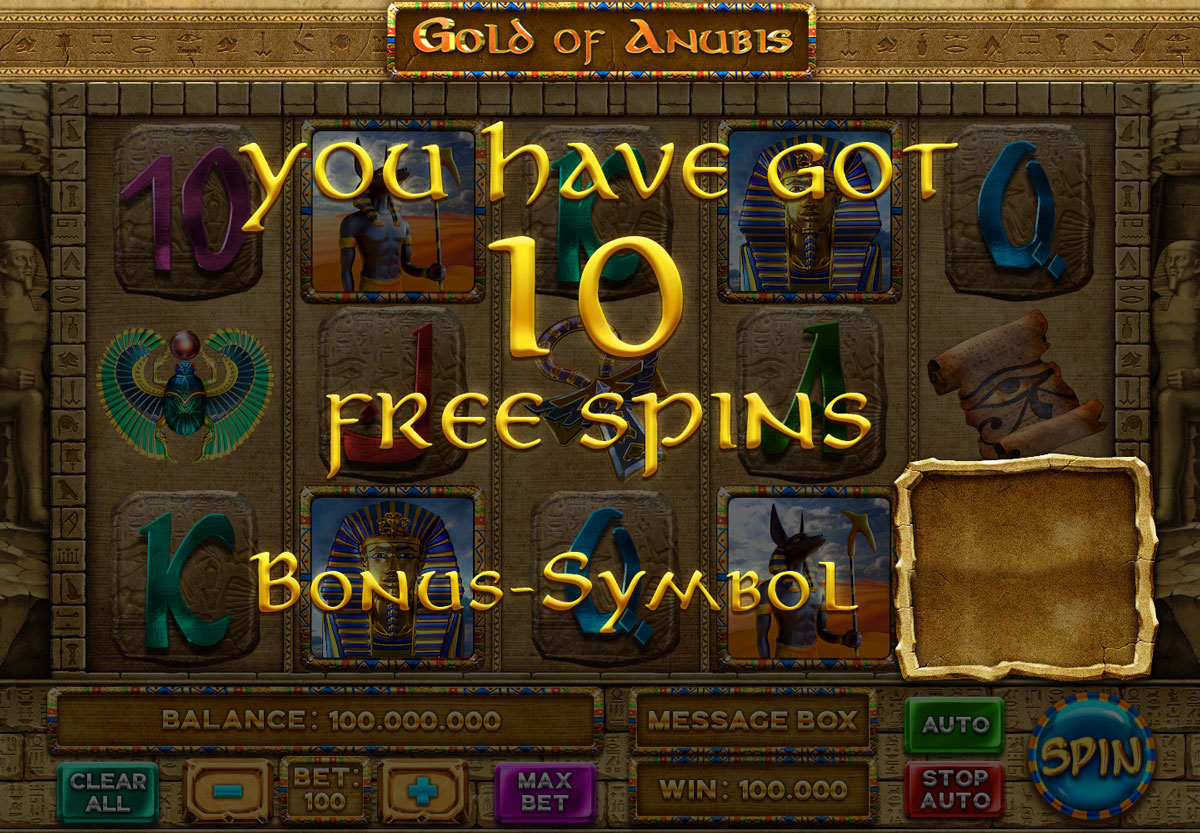 A congratulatory window on the background of the main reel, indicating that you are in the free spins game. In the center there is a papyrus with twisted sides with a bright pronounced shade of time on it and slightly prominent inscriptions and symbols on it. In the middle at the top there is a congratulatory inscription in gold letters – “Congratulations”, below – in small print in black letters – “you’re entering”, and even below – in bright green letters in a larger font – “The free spins game”. At the very bottom of the papyrus, the already familiar volumetric blue OK button in gold letters and orange-blue edging. 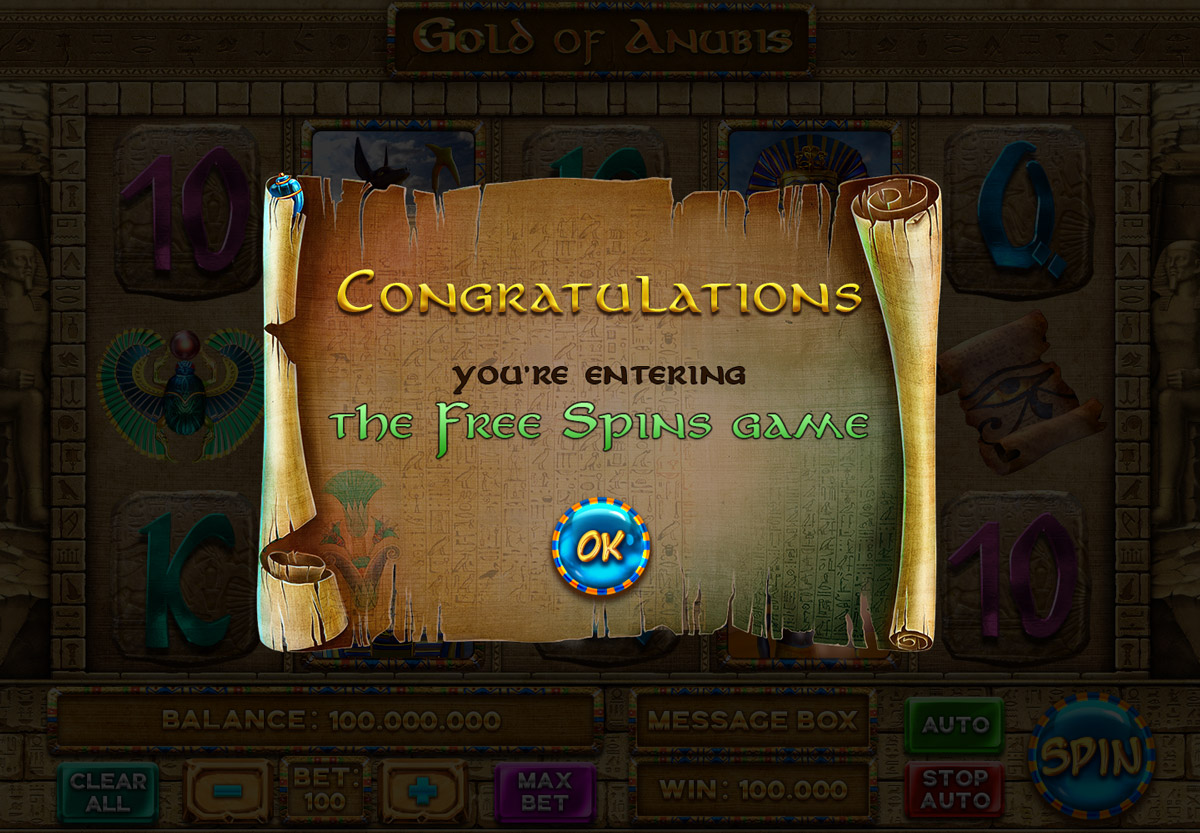 The second congratulatory pop-up, presented on the background of our reel, shows the amount of winnings from the free spins game. Window in the form of an old papyrus. In the middle at the top there is a congratulatory inscription – “Сongratulations” in gold letters. Below in smaller font in black letters – “you won” and next to the amount of winning. Even lower in green letters – “From Free Spins”. At the very bottom of the papyrus, the already familiar voluminous blue OK button in gold letters and orange-blue edging. 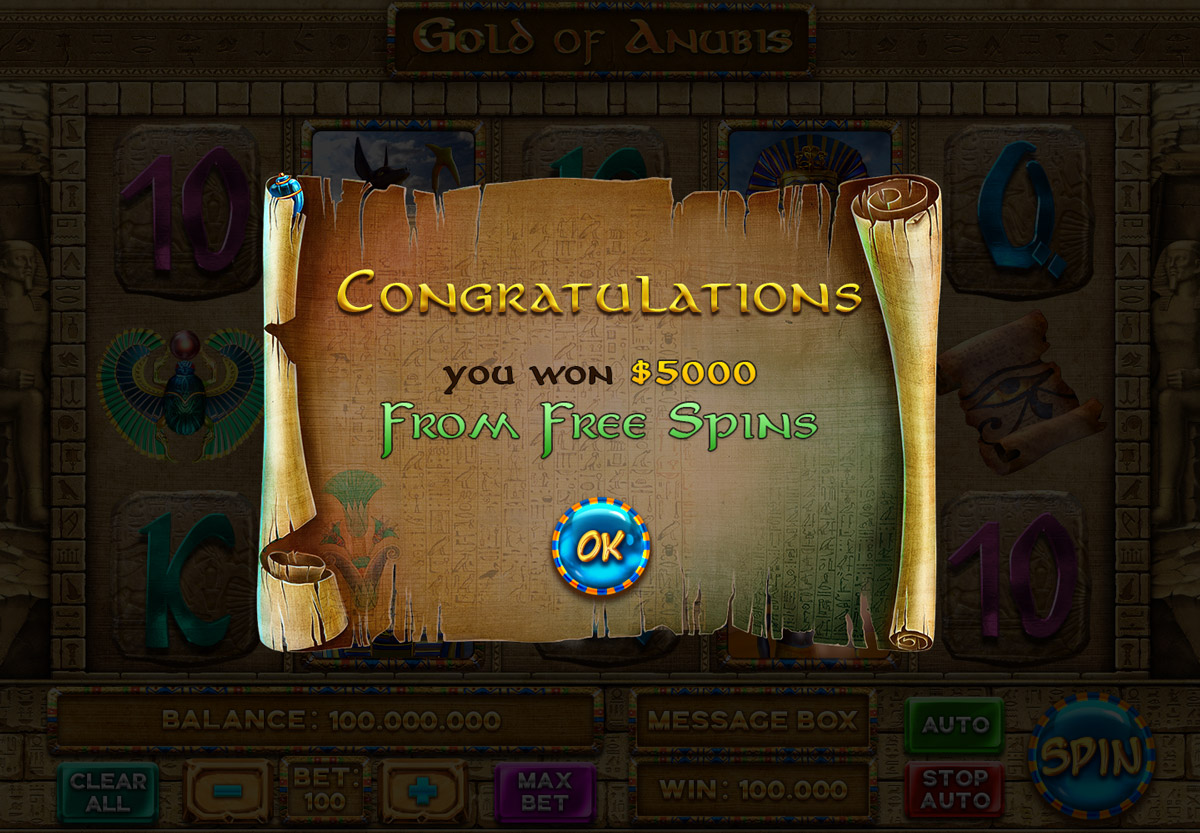 The third pop-up on the background of the main reel informs that the bonus game is starting. Papyrus in the center. In the middle at the top there is a congratulatory inscription in gold letters – “Congratulations”. Below, in small print in black letters – “you’re entering”, and even below, in bright green letters in a larger font – “The Bonus game”. At the very bottom of the papyrus, there is blue OK button in gold letters and orange and blue edging. 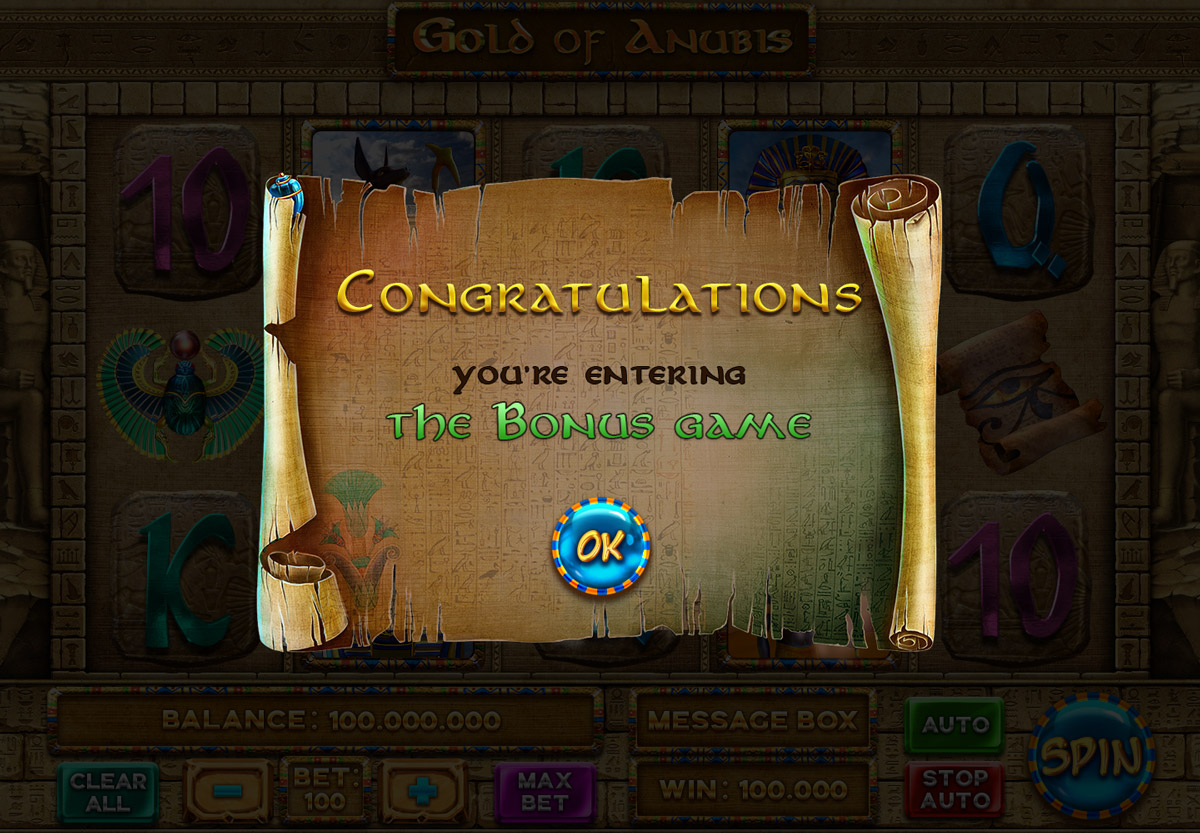 The last congratulatory pop-up informs about the amount of the winnings from the bonus game. The window is in the form of an old papyrus. In the middle at the top there is a congratulatory inscription – “Congratulations” in gold letters. Below in smaller font in black letters – “you won” and next to the amount of winning. Even lower in green letters – “From the Bonus game”. At the very bottom of the papyrus, there is a three-dimensional round OK button in blue with gold letters and an orange-blue border. 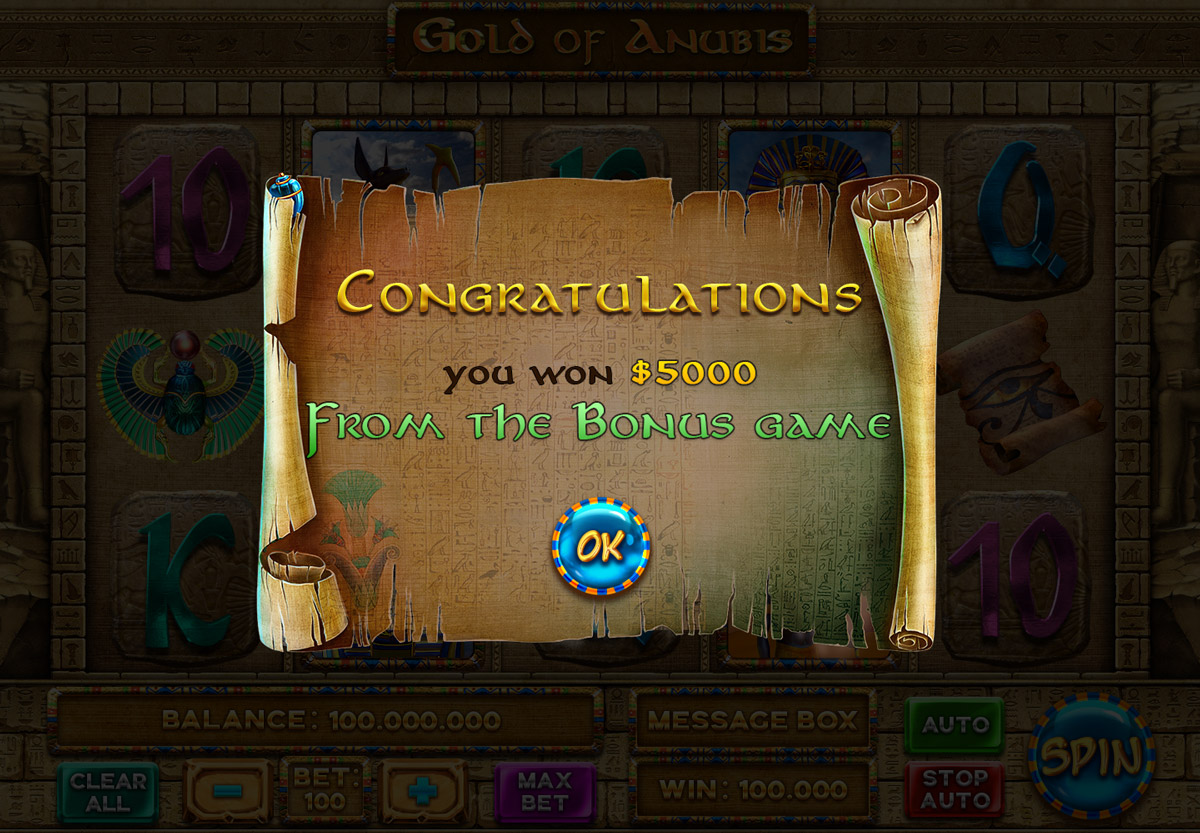 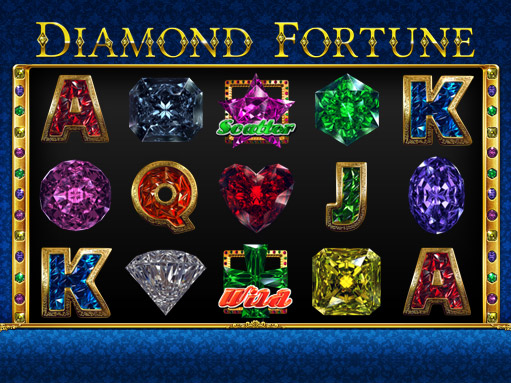 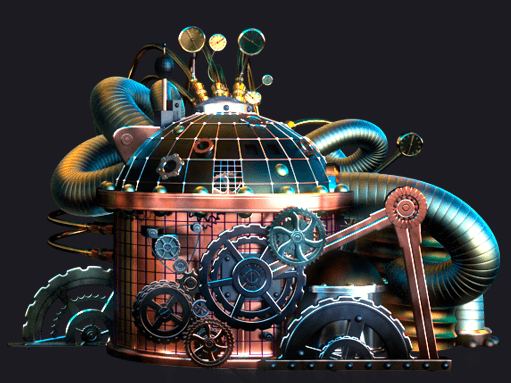 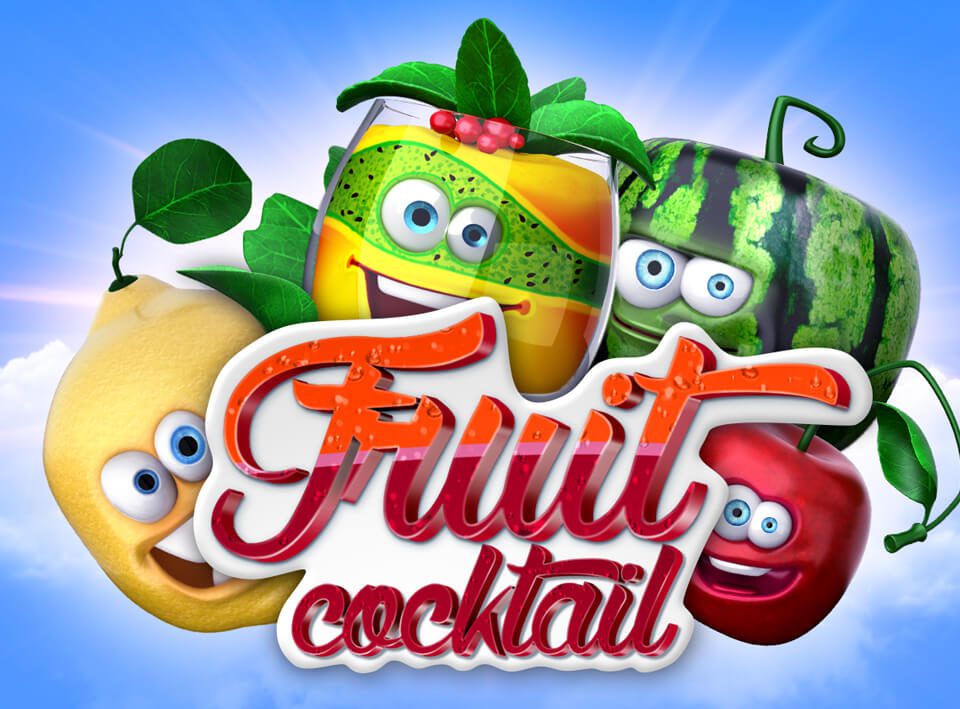 The second life of slot machines, that are old as eternity