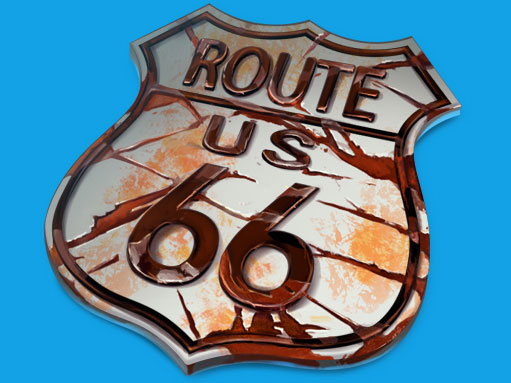 Each of us knows the feeling when, due fear, we want to freeze and don’t move. In moments of such a fright, it seems that the heart in the chest is beating too loudly and is about to betray you. But once emotions calm down, we breathe a sigh of relief and sharper feel the charm of life. Is that the reason, why we are so pleased to watch horror films?

The Scarecrow slot is a mystical horror that has been embodied in the game. It would seem that what’s wrong with the track that leads to an abandoned farm? But the combination of elements and their graphic implementation create an incomparable horror movie atmosphere. Raven seems to want to warn of a possible danger. Or is he himself a danger? Unknown – this is what players associate an empty farm with a lone weather vane and a terrible scarecrow. And, of course, we want to start the game as soon as possible in order to solve the mystery of the black raven. Scarecrow is more than a game. Here is a whole story about a traveler who turned onto the wrong way. The road led the traveler to a mysterious place that requires endurance from him and, of course, good luck. The game UI is fully consistent with the theme of the game. The gloomy swamp green hue of the reels best complements the eerie symbols. The crimson-red background creates tension and causes to contract in anticipation of a sudden turn. 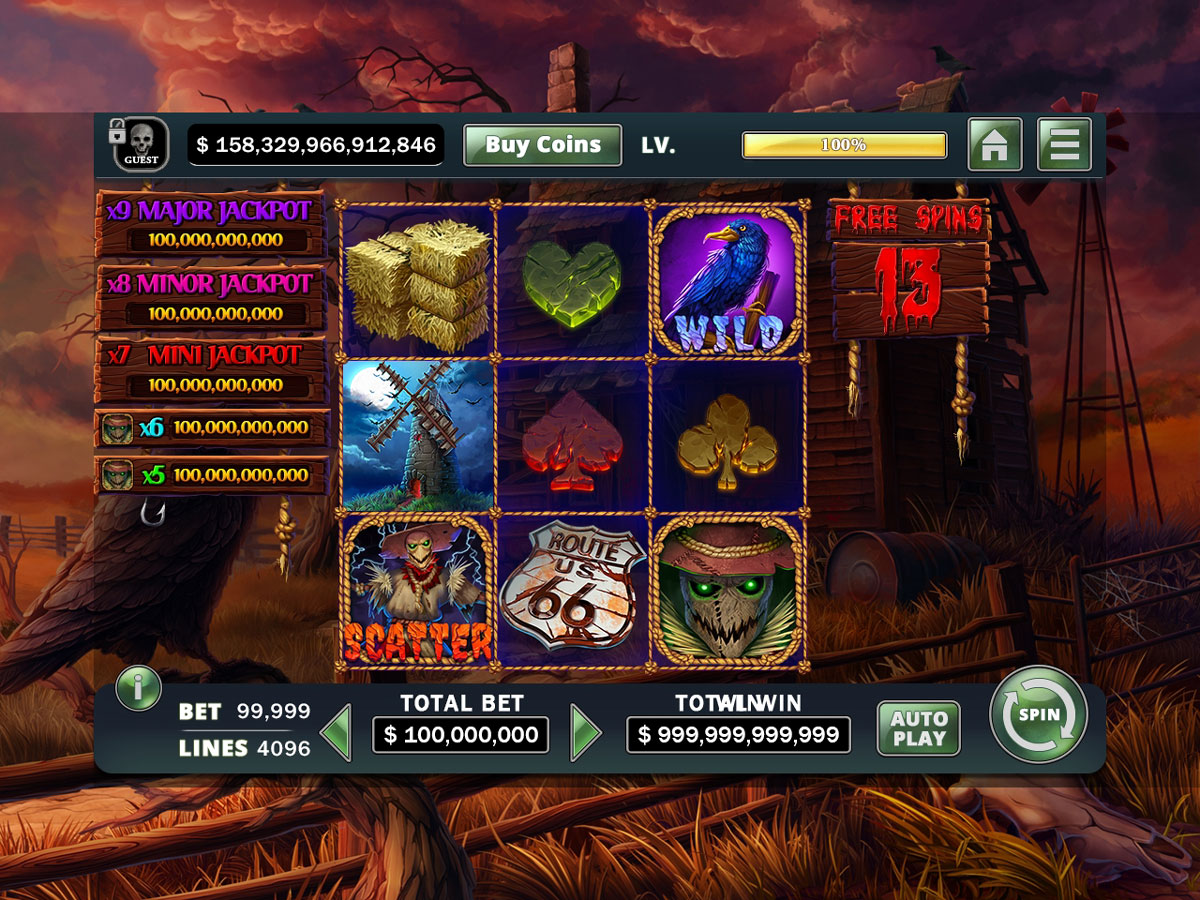 Even a black/white sketch of the gaming background evokes a feeling of emptiness and oblivion. Definitely dilapidated house, the inverted barrel and the skull of a bull near the hedge leave no doubt: the farm has long been abandoned. The only living creatures seem to be a raven on a fence and its relatives on a bare tree. 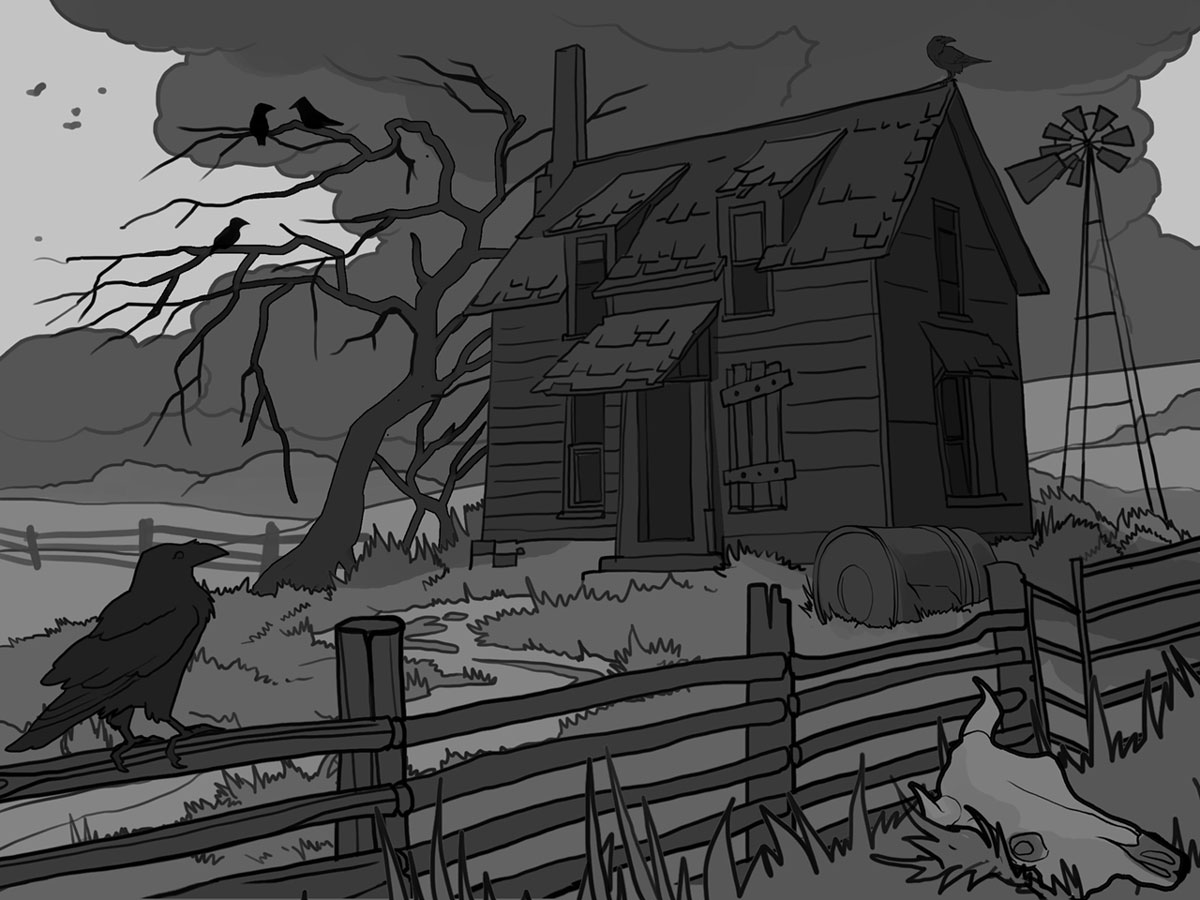 A colored sketch of the background reveals new details to the viewer. The roof is collapsing, roof tiles are pouring from it. Tall grass is a sure sign that the house has long been empty and no one is visiting here. Only a narrow winding path doesn’t cover. It is as if beckons the lost travelers to look into this mysterious hut. 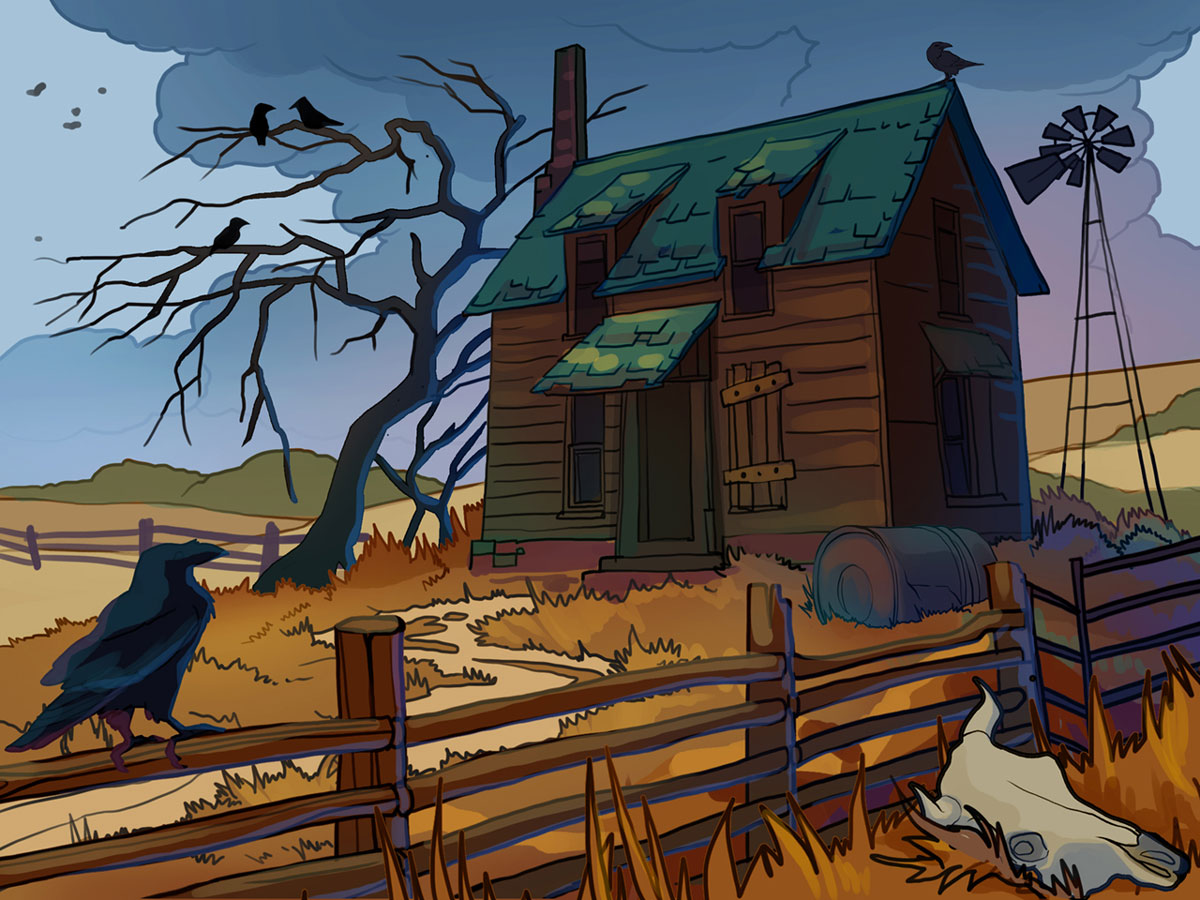 Frightening details appeared on the detailed game background: a gallows on a dry tree and a rag doll. From the sight of an ax and red spots goosebumps run. Is it really blood? Maybe still paint? But the prints on the doorway and boarded up window leave no room for doubts. Here you definitely have to be careful! 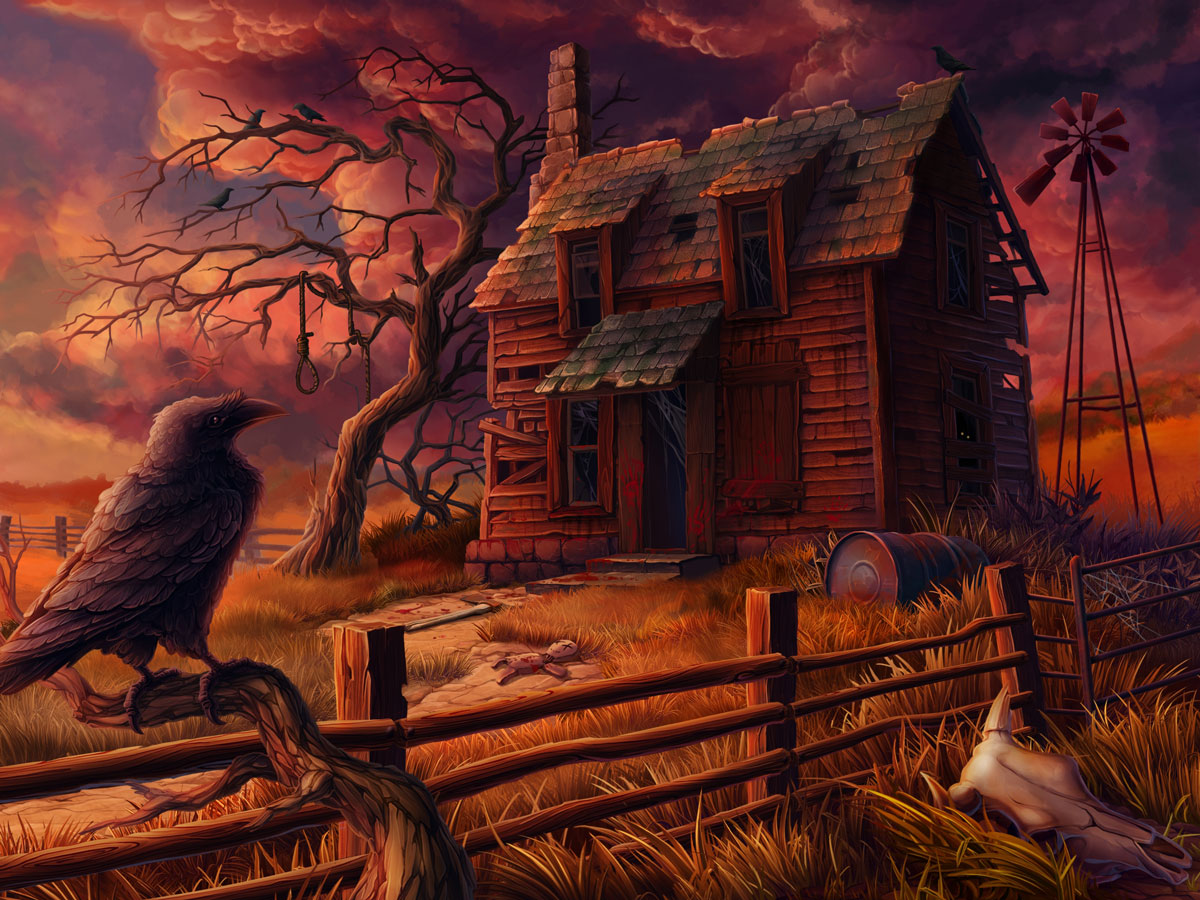 The night version of the background looks no less frightening. The clouds hide the moon and its light will not help the traveler. But an abandoned house, on the contrary, seems to come to life. Red light streams from doors and surviving windows. And the question arises: who lit it? During the day, the house looked completely abandoned. 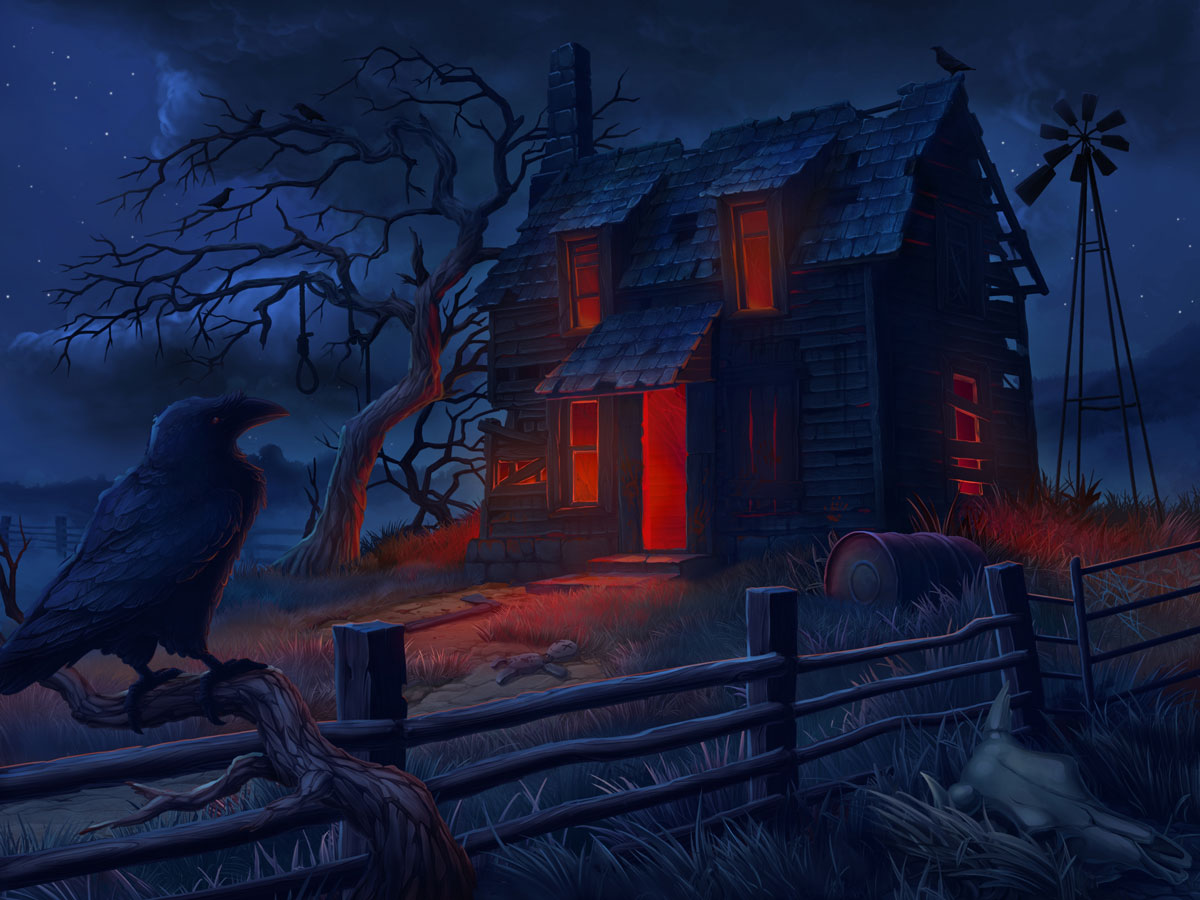 Sketches of high symbols give a hint: we see a raven and a scarecrow on them. Do they manage the life of an abandoned farm?

High symbols in color masterfully reveal the characters of the heroes of the lot. The scarecrow flashes its eyes fiercely. The large image shows that the keeper of the farm is not at all happy with the guests.

Scatter symbol also depicts a scarecrow. But there are more details: lightnings sparkle behind him, and a loop of a gallows hangs on his neck instead of a tie. And the question is, what left red marks on his clothes?

Wild symbol is a raven. He is depicted in profile, so the bird looks even more predatory. The yellow eye sparkles, and a beak curved like a vulture’s beak is ready to pierce fresh flesh.

Regular symbols sketches are additional details of the story. The road icon sends players to the film “Wrong Turn.” It becomes clear that everything that happened, began with the road that led to the abandoned house. Mill and haystacks are recognizable farm attributes. Only the mill looks very dilapidated.

Colored symbols fill the story with new shades. The route icon is all cracked. It is evident that he is not the first year luring gullible travelers to make a fatal turn. A frightening red light is pouring from the mill. The artist did not accidentally depict the mill against the background of the night sky: a flock of bats circles above its blades, whose time begins with the arrival of darkness. Haystacks at first glance look harmless. But anyone can hide behind them! And the question remains, who stacked the hay in stacks if the farm looks empty?

Low symbols – card suits. On the sketches of the symbols, damage is visible, either from the knife, or from the axe.

Colored symbols show that light appears at the site of the deepest damage. It looks very mystical! Each suit is depicted in its color – green, red, blue and yellow.

Animated symbols add game dynamics. Lightnings sparkle behind the scarecrow, he waves his hands ominously. It seems that he is about to jump off his pole! On a large image of a scarecrow, his eyes shine brightly. And the face that is approaching, makes you move away from the screen. But at the same time, the light of these green eyes mesmerizes and beckons. A raven in a silent cry opens its beak. Imagination immediately adds a piercing sound. The reddish light from the mill door flows unevenly. It is either brighter or dimmer, as if a fire is burning inside. The web on dilapidated blades sways with each movement, and the blades themselves resemble a skeleton – they are so destroyed. Haystacks move, as if someone is now jumping out of them. On the road icon ominous red “66” lights up.

In the animated version, Low symbols pulsate to the beat with a fast heartbeat. 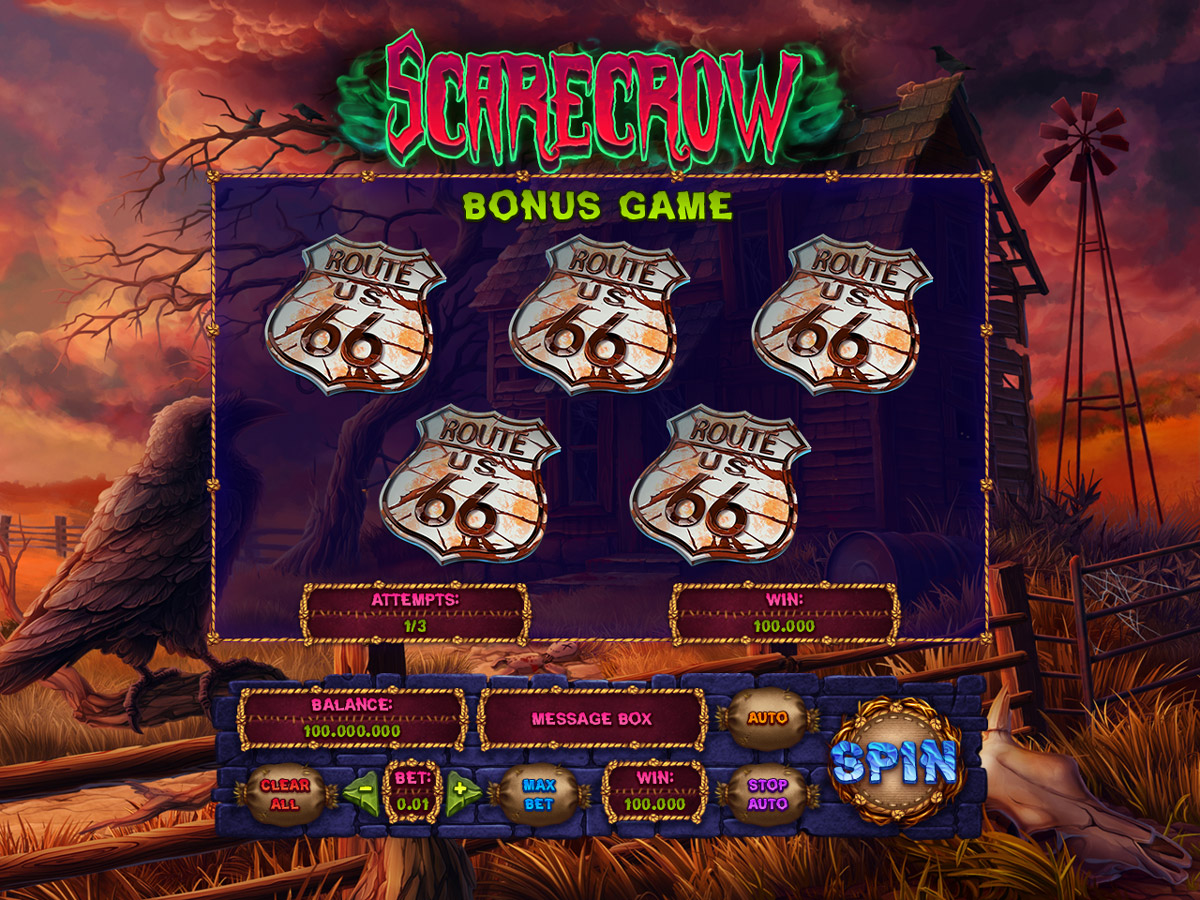 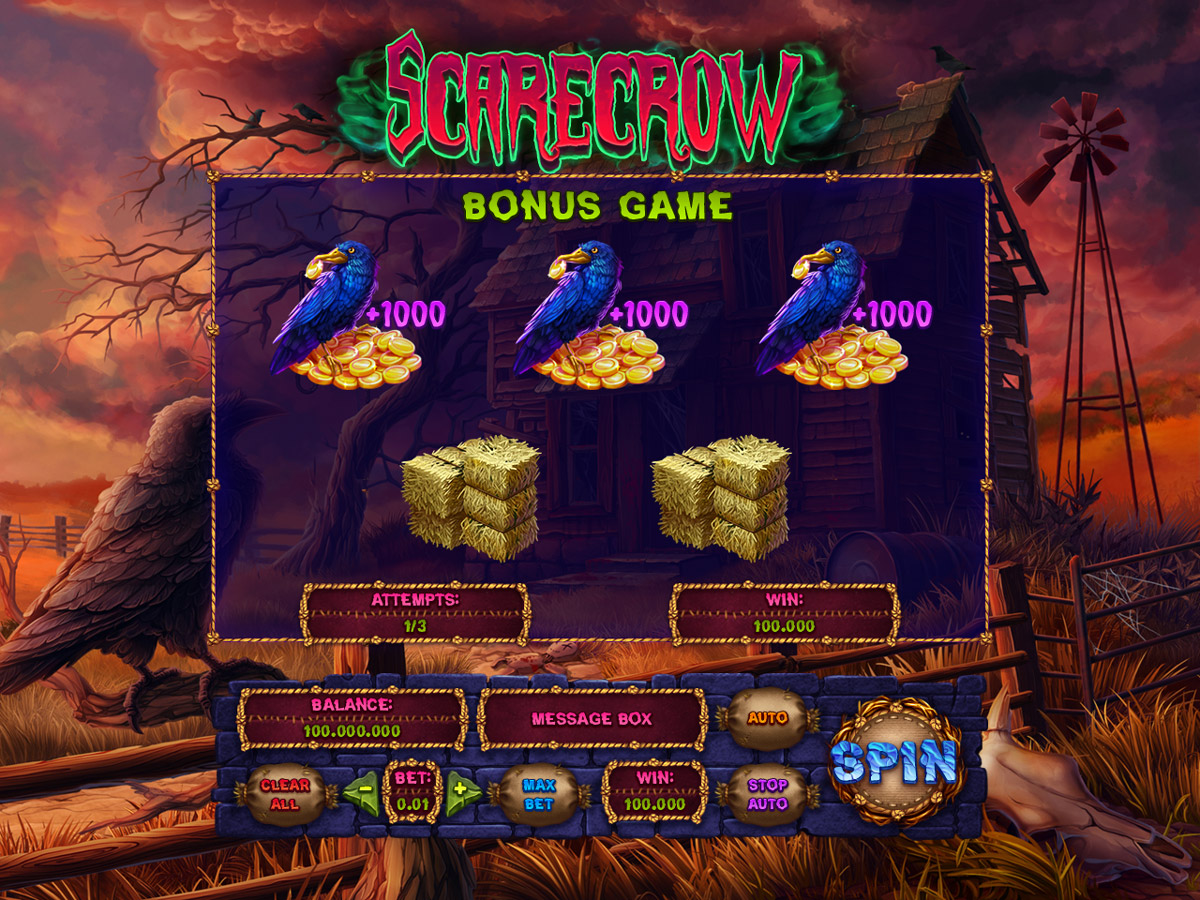 The first version of the congratulatory screen is a wooden shield on the background of the main image of the farm. There could be an inscription “Welcome”, but not too hospitable marks from the shots are visible in the corner. Scarlet hat and gloves complement the shield and revolver. 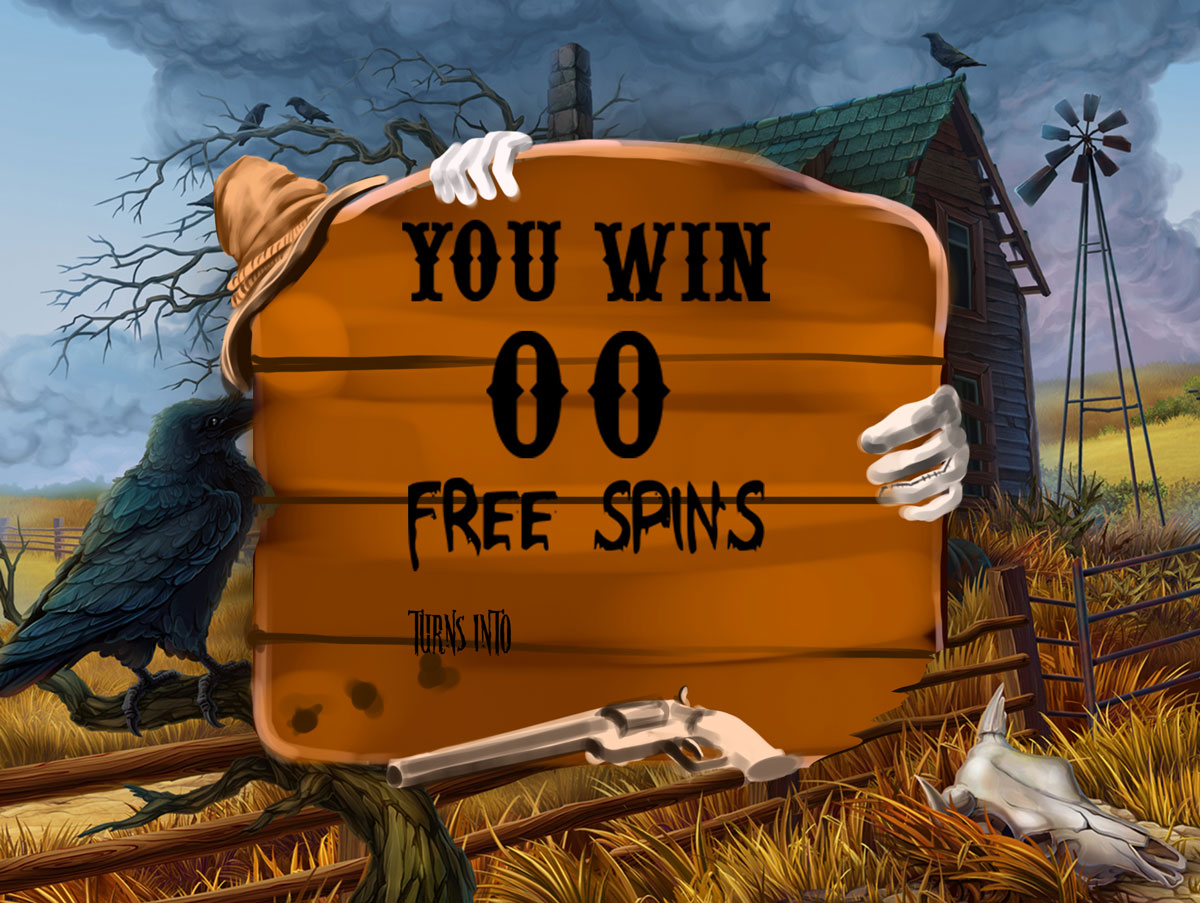 In the second version of the congratulatory screen, the emphasis is no longer on the background, but on the inscriptions themselves. The atmosphere of the game is supported by the red color of the text and portraits of the scarecrow with a completely unkind expression on its face. 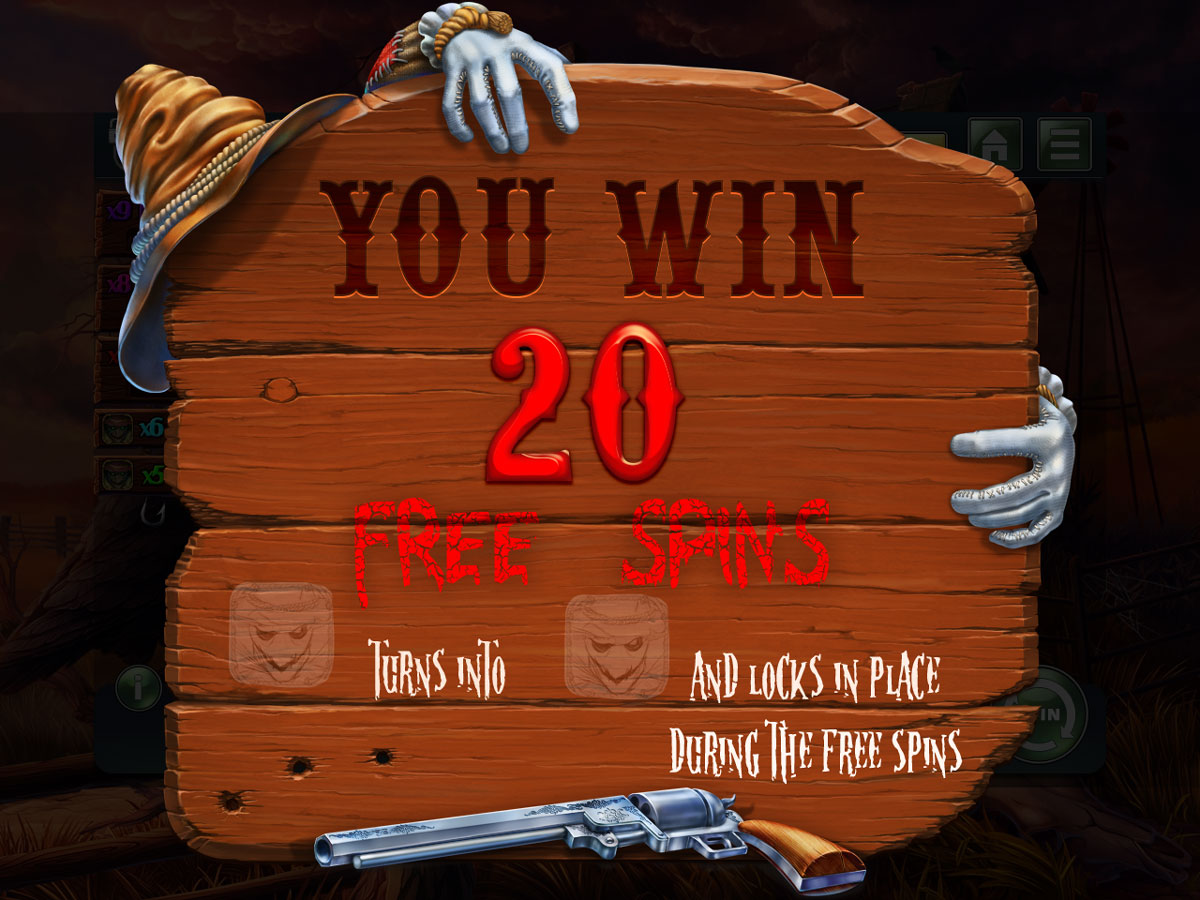 The third version of the congratulatory screen is the familiar shield. It is held in detailed drawn gloves in scarecrow hands. It’s a little creepy when finger joints are visible under the gloves. Are these gloves stuffed with straw? Or was the scarecrow once a man? 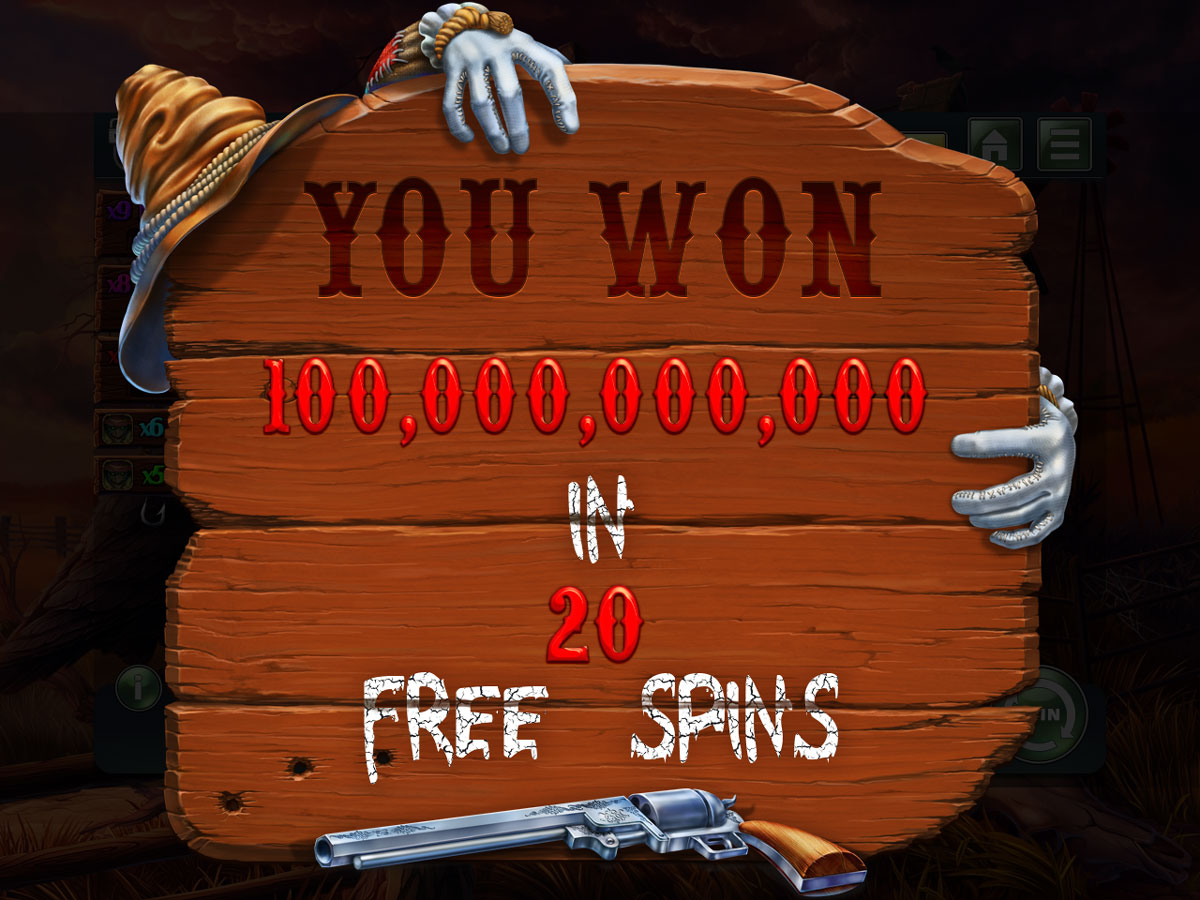 The thumbnail of the Big win greeting screen provides another hint. A severed hand in shackles hints that they could have used uninvited guests for a scarecrow. The key and the unlocked lock are a symbol of the fact that the inhabitants of the farm capture travelers. 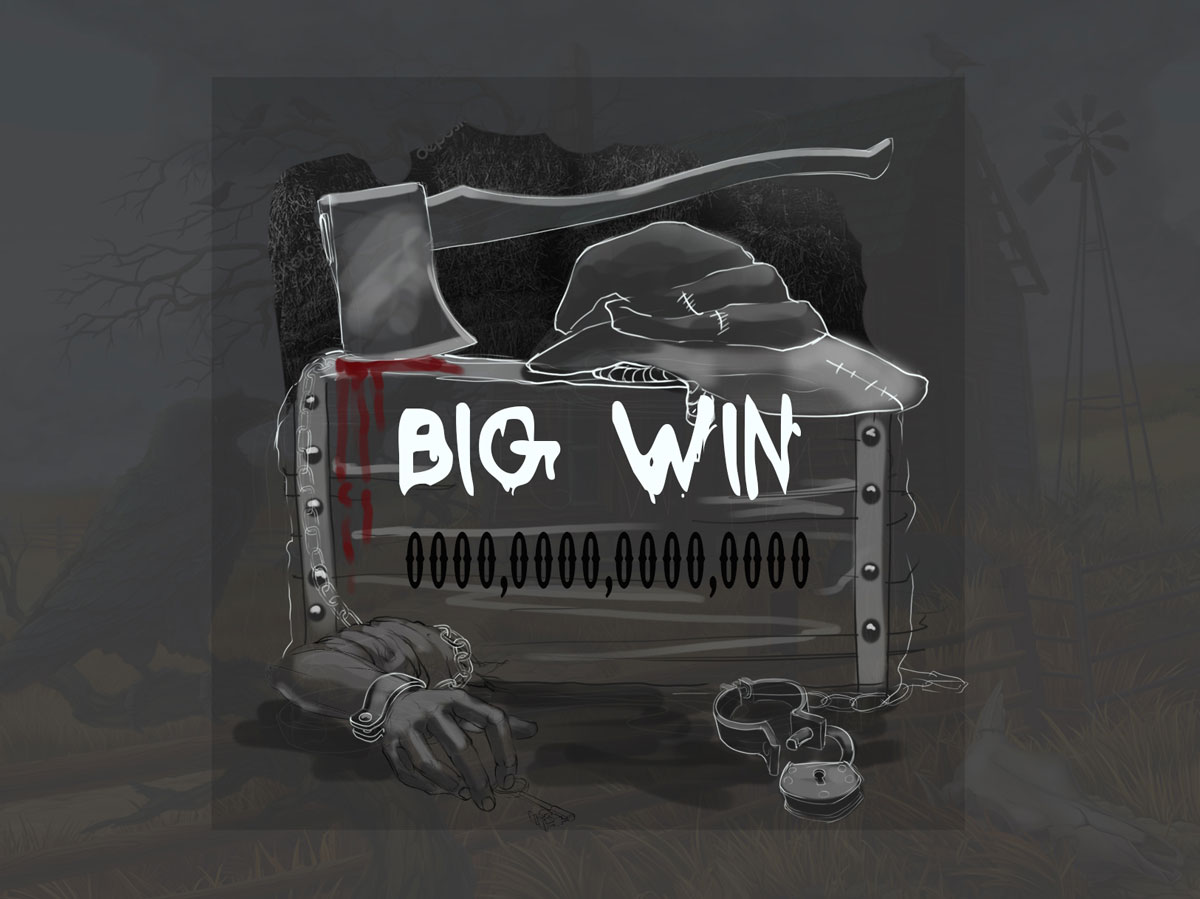 The detailed color screen of the big win shows that the action takes place at night. The inscription Big win glows with blue moonlight. It seems that a hand in a bloodied shirt belongs to a man who is getting out of the ground. 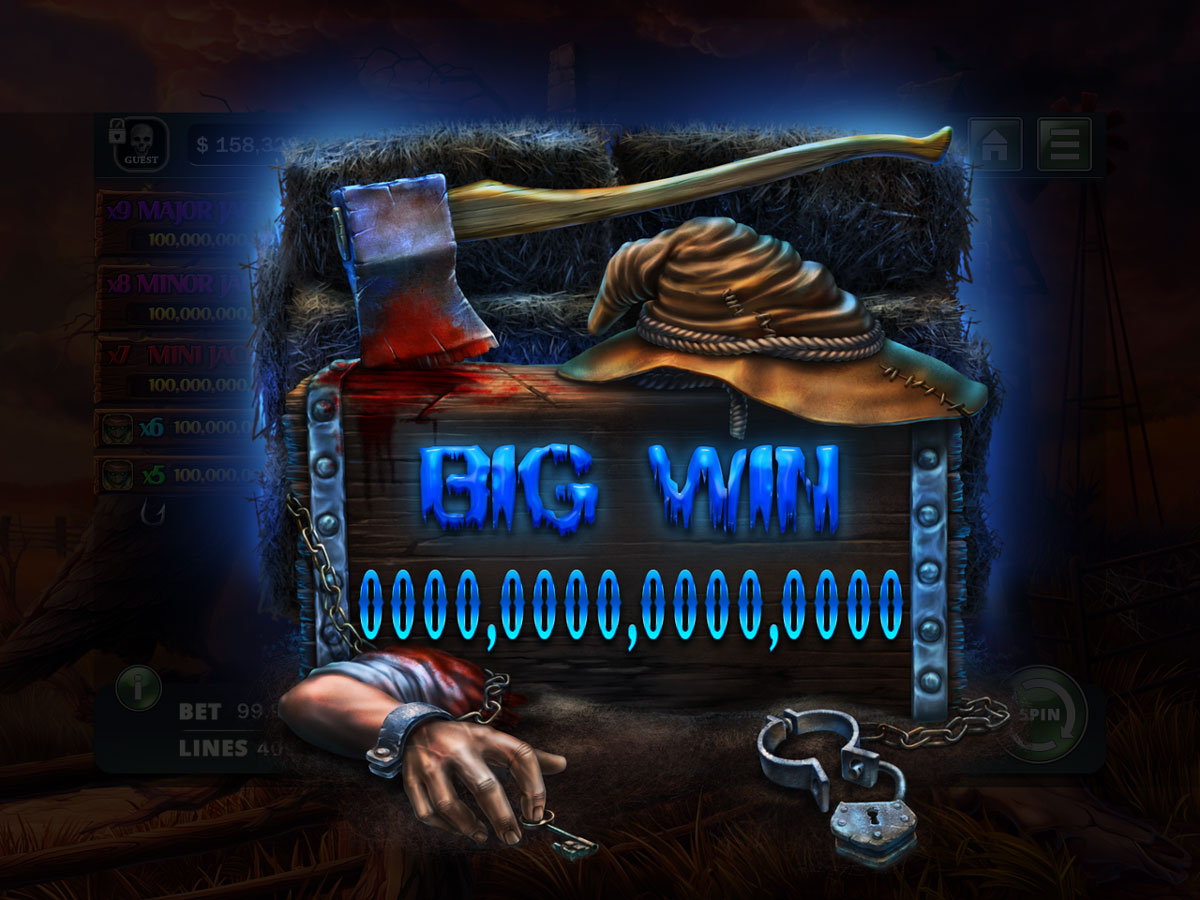 The sketch of Mega win screen has a different character. A conspiracy scarecrow puts a finger to his lips and encourages players to keep a secret. And now the player already feels not just a witness, but a participant in what is happening on the screen. 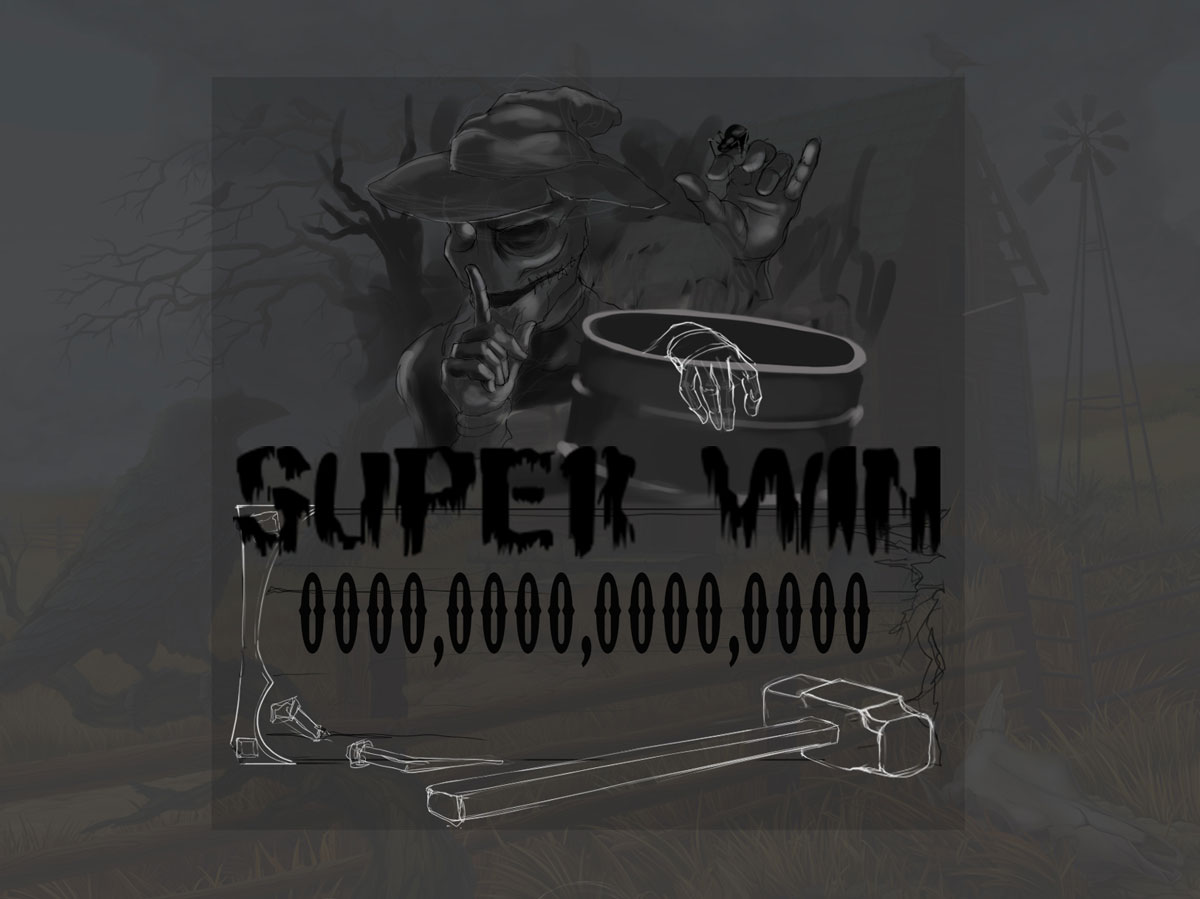 At the color version, Mega Win glows acid green. Perhaps, in the barrel from which the victim’s hand sticks out, just acid. There is no ax on this screen. Instead, a hammer appears. And this tool looks no less frightening. 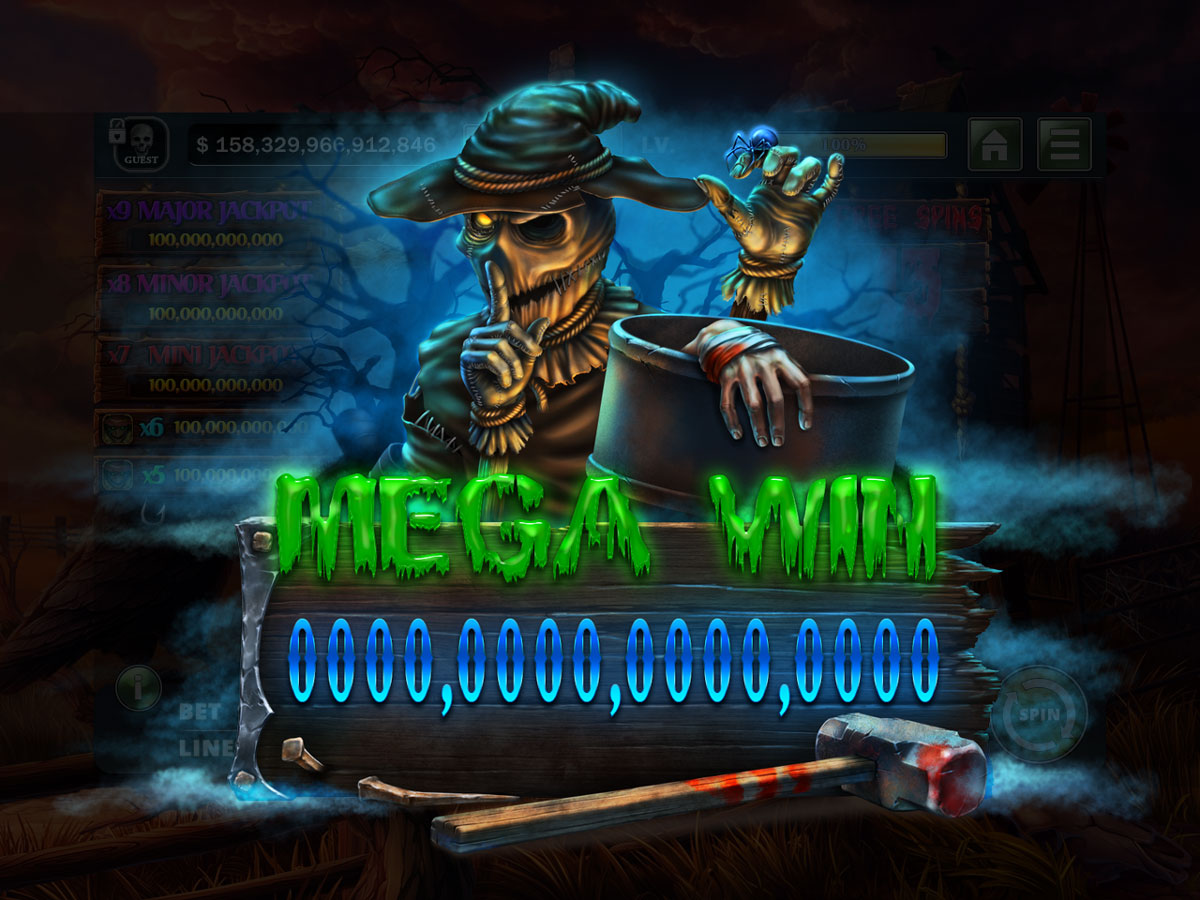 The Super Win screen sketch shows us the main inhabitant of the farm, a scarecrow, in the most terrible way. Without a hat, with a bare head and a scythe in his hands, the scarecrow resembles death. And in its most nightmare manifestation. 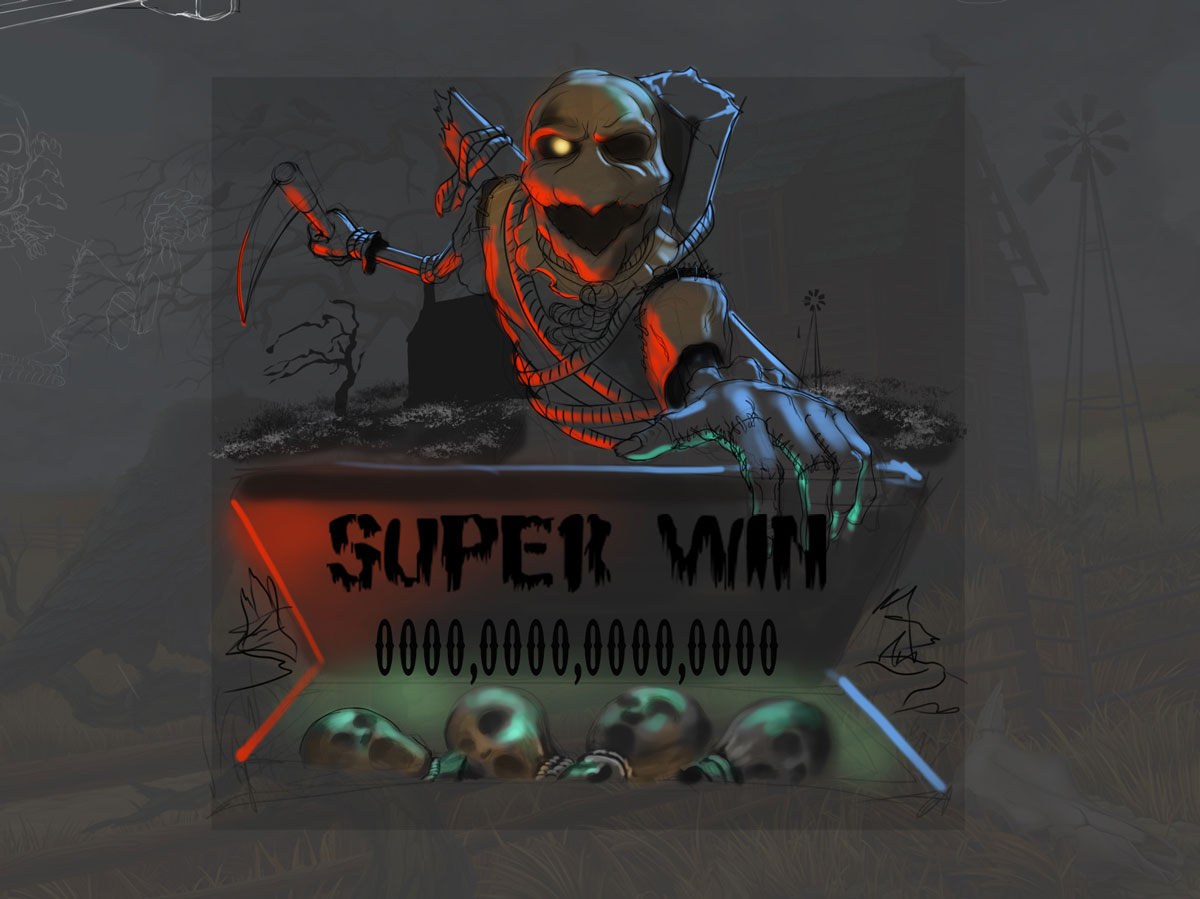 On the detailed screen of the “Super Win” we can see that the scarecrow moves freely around the farm and with a pole-base. His scythe shines ominously in the moonlight. But the worst thing is, of course, the contents of an open mailbox. What has been screaming heads until recently is hidden under the fabric and is preparing to become the new guardians of the farm. 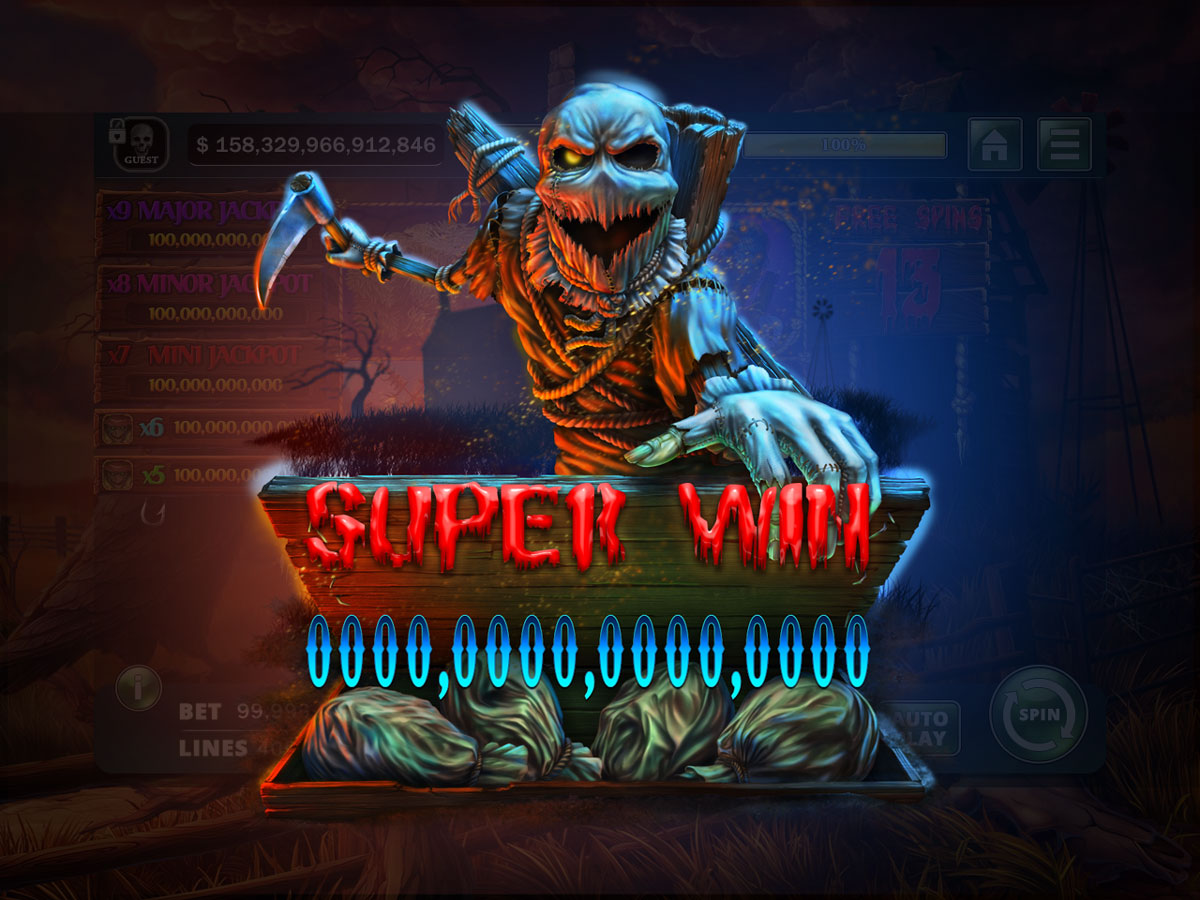 The Major Jackpot screen is similar to the previous one. Here, around the scarecrow, there is still a ghostly radiance that makes it look like a ghost. Fire is blazing around the headbox. 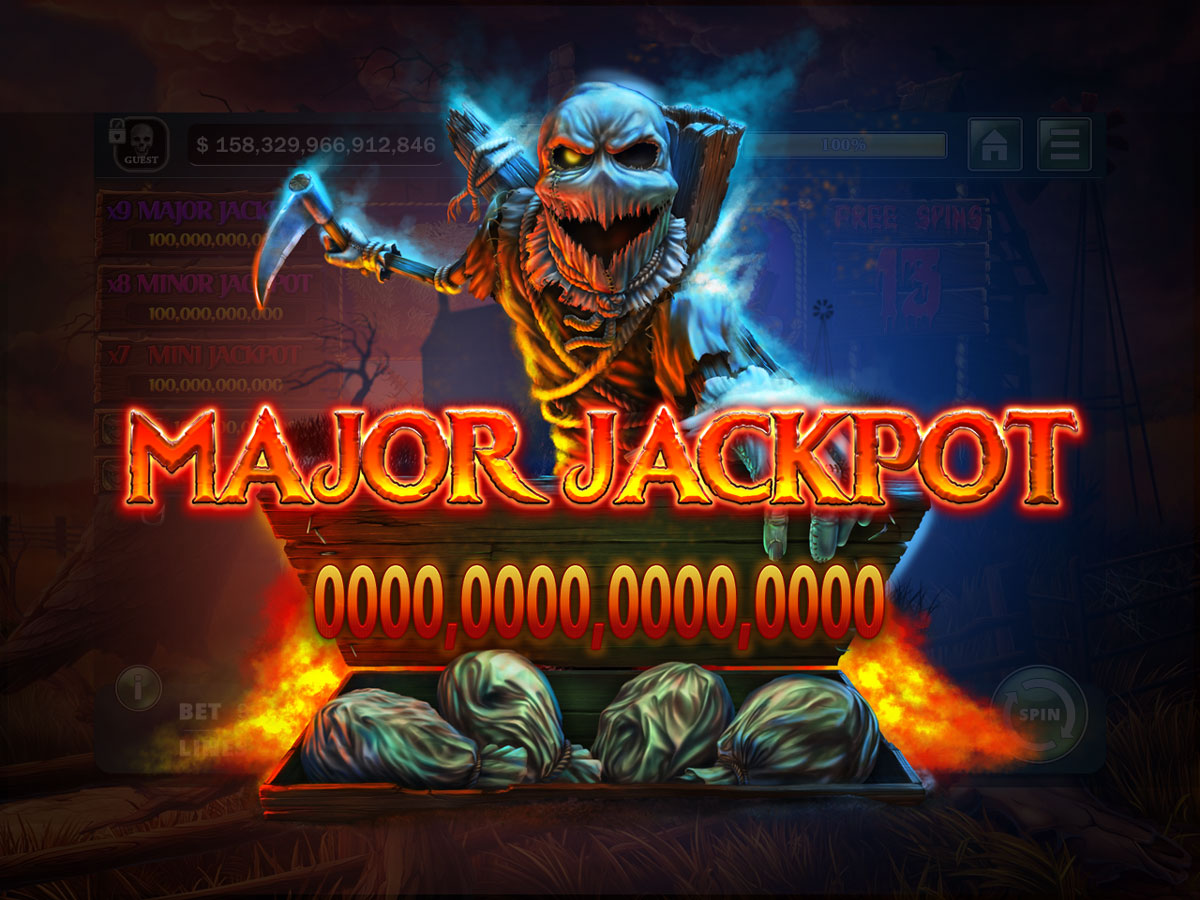 The Minor Jackpot screen repeats the Mega win congratulatory image. The image of a scarecrow, a barrel and a hammer envelops a greenish smoke. Against this background, traces of blood look especially bright. 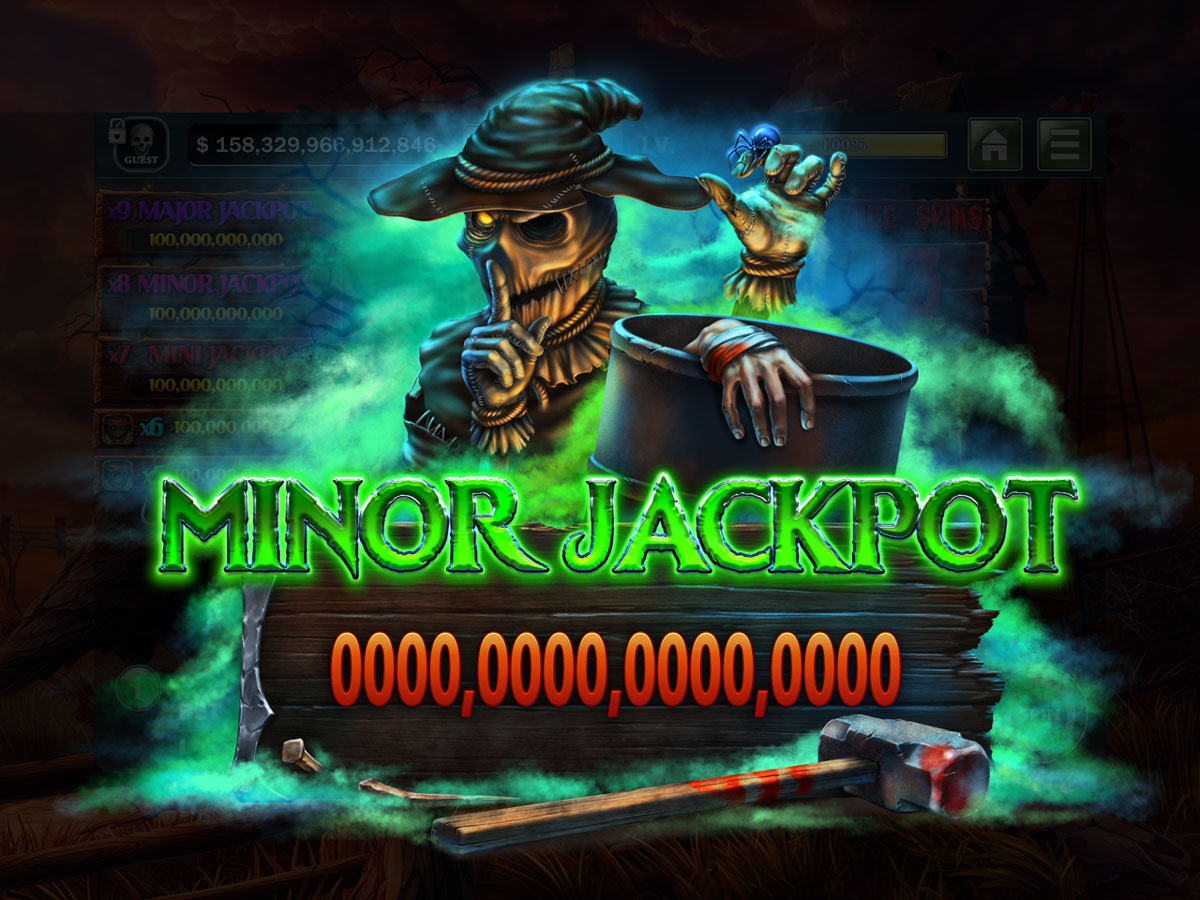 The Mini Jackpot screen is a version of the Big win image. Here, around the haystacks, ax and hand with shackles, white-blue smoke swirls. 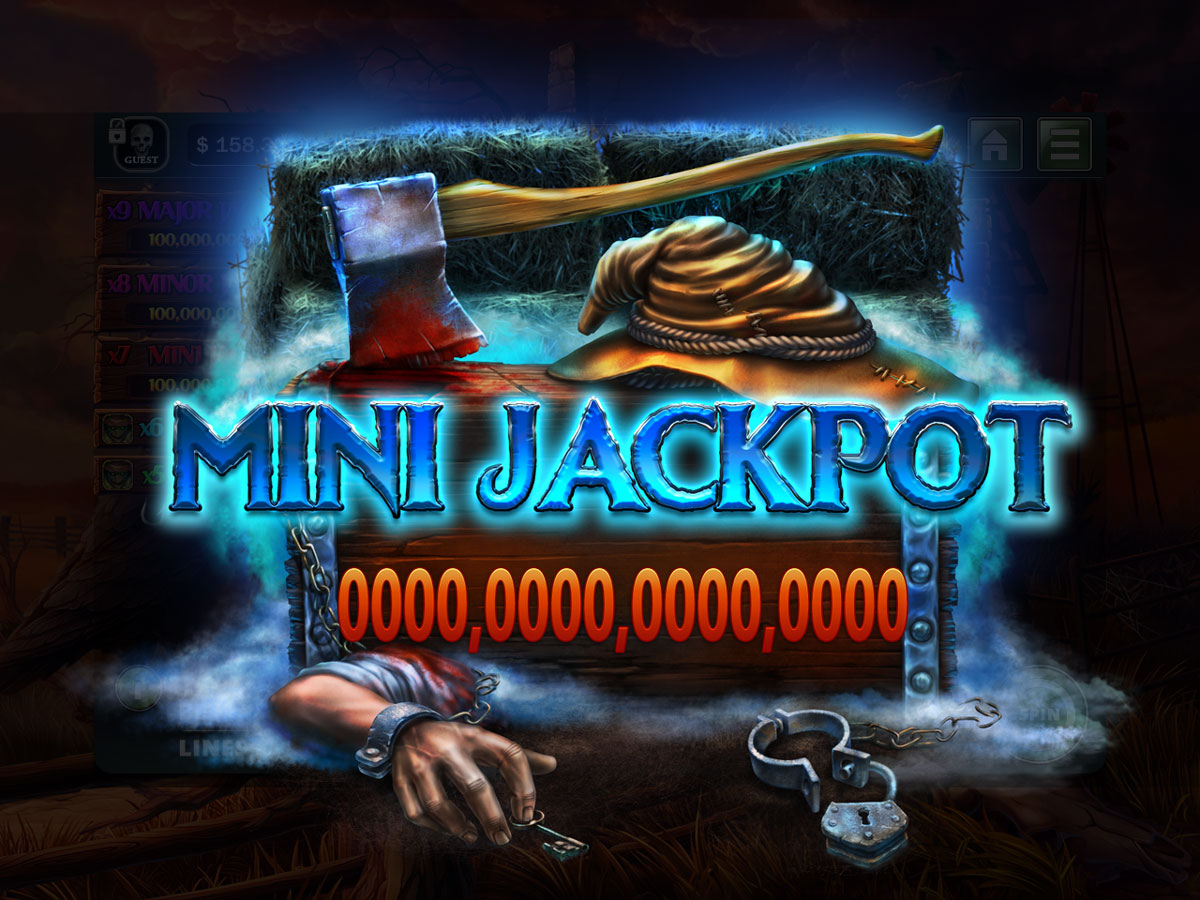 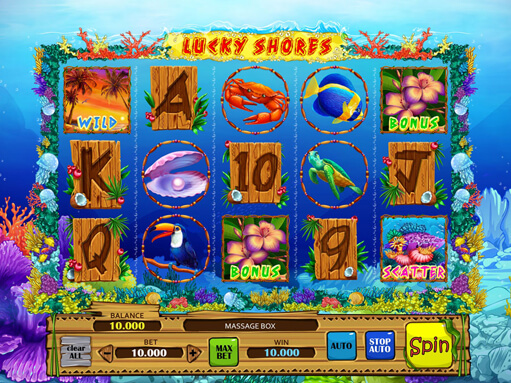 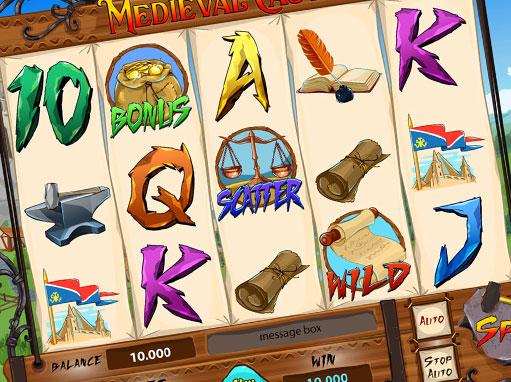 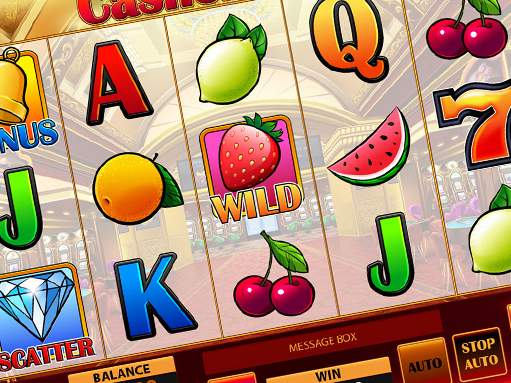